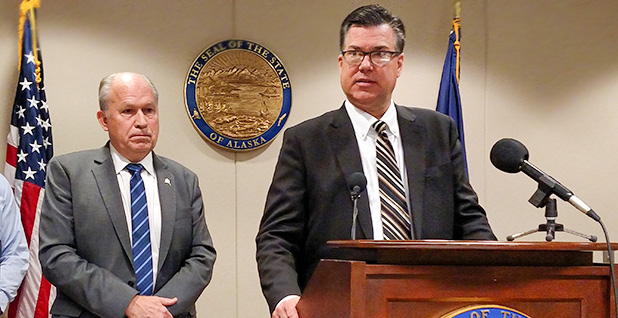 Speaking at the AGDC board of director’s monthly meeting, Meyer talked about the corporation’s recent discussions with Federal Energy Regulatory Commission staffers about the state’s application to build the export project.

He shared the details of recent visits to Alaska by officials of PetroVietnam Gas Joint Stock Corp. and the China Petroleum & Chemical Corp., known as Sinopec, which are both considering buying Alaska’s natural gas.

Meyer also laid out a plan to create two new limited liability companies within AGDC to handle some of the agency’s operations.

It wasn’t until the very end of his presentation that Meyer finally addressed the elephant in the room — the results of the Alaska elections, which could drastically alter the future of the LNG project.

Two days before the AGDC board meeting, Alaska voters elected Republican Mike Dunleavy as governor. Throughout his campaign, Dunleavy questioned the economic viability of having the state run the Alaska LNG project. He insisted that the venture should be handled by private oil companies.

In early 2014, Parnell was instrumental in negotiating a joint development agreement under which the state of Alaska planned to work with BP Alaska, ConocoPhillips Alaska and Exxon Mobil Corp. to build the Alaska pipeline and LNG export project.

But in November of that year, Parnell lost his bid for re-election to Alaska Gov. Bill Walker (I), who advocated having the state run the gas commercialization project.

By appointing Parnell to manage the project, Dunleavy appears to be seeking a return to the state-industry alliance.

Once Dunleavy takes over as governor on Dec. 3, he’ll have the authority to appoint a lineup of new AGDC board members who also support Parnell’s approach. That transition could very well cost Meyer his job.

But at the AGDC board meeting, the looming presence of a potentially hostile new boss didn’t appear to rattle Meyer.

He offered an optimistic assessment of the gasline’s future under Dunleavy and the newly elected Republican-controlled state Legislature.

"I’m hoping that under the new leadership here and under the changes in the Legislature that the government and AGDC are working in great harmony," Meyer told the board.

"I expect a whole level of alignment and harmony here that really is going to free us up" to compete with natural gas projects around the world, he said.

Meyer, a former executive with Cheniere Energy Inc., was hired by Walker in June 2016 to handle the state’s participation in the Alaska LNG project.

The terms of his three-year contract were generous by Alaska standards. Meyer received a salary of $550,000 and relocation assistance of up to $50,000, as well as the potential of an annual $200,000 performance bonus.

At the time, the natural gas export project was being advanced under Parnell’s agreement to work jointly with BP, ConocoPhillips and Exxon, with Exxon taking the lead.

The public-private alliance proposed a plan to build a gas treatment plant on the North Slope, an 800-mile gas pipeline running from Prudhoe Bay to the Cook Inlet, and a liquefaction plant and export terminal in the Cook Inlet town of Nikiski.

The oil companies continued to work with the state through 2016, when the staff finished work on a comprehensive early front-end engineering and design report on the project.

But by the end of the year, the oil majors decided to drop out of the partnership, citing a glut of natural gas on the world market and what they called strong economic headwinds (Energywire, Feb. 6, 2017).

In the aftermath, Walker and Meyer eagerly took control of the Alaska LNG project, moving the original blueprint forward under state management. Over the last 18 months, AGDC has made significant progress.

In April 2017, the state agency filed an application with the Federal Energy Regulatory Commission to build the gasline, a move that triggered initial work on an environmental impact statement for the project. Federal regulators have committed to releasing a draft EIS on the project in February 2019.

The state signed a joint development agreement with three large Chinese companies that are considering partnering with AGDC to build, finance and buy gas from the Alaska pipeline project. A final contract with those companies is targeted for the end of 2018.

On the campaign trail, Dunleavy said he has a long list of questions he’d need answered before he would commit the state of Alaska to continuing work on the proposed, multibillion-dollar LNG export project.

High on his list would be why Alaska’s top oil producers really withdrew from the project in late 2016. "I’d ask them, was it truly not economical? Was there something else that we’re missing? Why aren’t you in this project?" Dunleavy said in an interview with E&E News this summer.

"I’d ask about things like the real cost of the project. Who pays for the cost overruns? Who pays for infrastructure that some may construe as not being directly related to the project itself, such as widening our bridges so that we can get pipe north?

"What happens if the whole economics change in five years, one way or the other?" he asked.

"Like all Alaskans, I want our gas monetized," Dunleavy explained. "But we have to make sure that we’re going to make money off of our resources. This is a big project. I think it begs a lot of scrutiny and a lot of questions."

Much of the most critical financial information on the project is not available to the public due to confidentiality agreements between the state and the companies involved. But once Dunleavy takes office, he’ll have access to far more data.

Would he rather see the private sector managing the Alaska LNG project?

"If the private sector is in it, then that means they’re going to make a dollar," he suggested. "They’re the experts in this. So would I rather see them in it — yes. Yes, absolutely."

For Walker, a dream unrealized

Walker’s dream of seeing the Alaska LNG project through to completion went up in smoke in October when his running mate, Lt. Gov. Byron Mallott (D), resigned and withdrew from the campaign after making what was described as "an inappropriate overture" to a woman.

Days later, Walker also dropped his bid for re-election and threw his support behind former U.S. Sen. Mark Begich (D). At the time, Walker said he was backing Begich in part because of his support for the Alaska LNG project.

In an interview with E&E News shortly before the election, Begich suggested that if he was elected governor, he would ask for Walker’s help on the Alaska LNG venture.

"He took it to the 10-yard line," Begich observed. "Over time, if the governor wants to continue to help on [the gasline project] — it would be great. We’re close to the finish line. And if I’m elected governor, we’re going to push it over the goal line."

The day before the general election, Walker issued an open letter to the next governor appealing to his successor to continue work on the gas export project.

Walker described the venture as "by far the brightest spot on Alaska’s economic horizon," which would create tens of thousands of jobs in the state.

"Don’t slow that progress: Keep your foot on the gas of Alaska LNG," Walker urged.

Instead of moving forward with Walker’s plans for a state-owned LNG project, however, Dunleavy is turning to Parnell to develop an industry-based approach.

Larry Persily, former director of Alaska natural gas transportation projects under the Obama administration, said he anticipates that Dunleavy will have the Alaska gasline agency continue its efforts to secure a building permit from FERC.

"I expect Gov.-elect Dunleavy, though he is skeptical of state control of the project, sees the wisdom of finishing the EIS and getting a decision from FERC, while waiting to see if private-sector partners sign on to pick up future development costs," Persily said.

But he added, "I do not expect [Dunleavy] is willing to put any more state money into this project."

"I really believe that Gov. Dunleavy working with former Gov. Parnell will restore the state of Alaska to an approach of getting our natural gas to market that recognizes the need to create alignment between industry, government and the market," Hawker said.

"I believe we’re back on the right track now of letting industry be industry and government be government."