New headwinds for Vogtle ahead of crucial decision 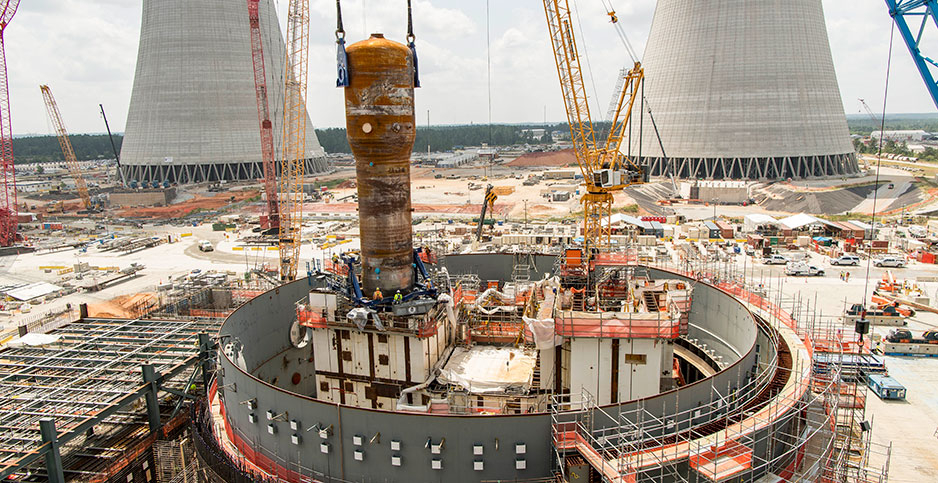 Work on Unit 4 of Plant Vogtle is seen in this August photo. Georgia Power Co.

Top members of the Georgia General Assembly are calling for a cost cap on Southern Co.’s Plant Vogtle nuclear expansion, just days before two of the public power utility companies involved in the project must decide whether they want to stay in.

The bipartisan group of 20 lawmakers said Georgia Power Co.’s recent decision to absorb a new price increase for Vogtle is unfair to Oglethorpe Power Corp. and the Municipal Electric Authority of Georgia (MEAG). The public power companies must pass all of Vogtle’s expenses on to their customers.

Oglethorpe and MEAG must decide by Monday whether they want to finish the reactors, whose price tag has risen an additional $2.3 billion in less than a year. MEAG also is facing increased pressure from Jacksonville, Fla.’s electric company, JEA, to get out of a long-term arrangement to buy power from the reactors once they are finished.

The lawmakers’ letter was sent to the boards of Georgia Power, Oglethorpe and MEAG yesterday afternoon before it was publicly released to the media. The House speaker pro tempore, Senate president pro tempore, additional House and Senate leaders, and a number of committee chairmen signed the letter.

"Please ensure prior to voting in support of moving forward as required by the amended co-owners agreement that a cost cap is established that protects all Georgia electric ratepayers from this and future overruns," the letter states.

The lawmakers are pressing for a cost cap after Southern disclosed the new increase in August for Vogtle, already years behind schedule and billions of dollars above its forecast budget. Georgia Power agreed for now to absorb $1.1 billion — representing its 45.7 percent share of the project — shielding its customers from paying more in their utility bills.

The public power companies do not have shareholders, which means their customers don’t have the same protection. Georgia Power’s decision "puts a disproportionate cost burden on [electric membership cooperatives] and city utility customers," lawmakers wrote. "This approach is unfair and anticompetitive."

A Georgia Power spokesman responded in a statement:

Vogtle, the lone nuclear construction project in the U.S., is the first set of reactors to be built from scratch in nearly three decades. Southern’s nuclear unit took over for Westinghouse Electric Co. LLC last year after the contractor went bankrupt, and the reactors are supposed to be finished in November 2021 and 2022.

Electric companies building a similar project in South Carolina walked away roughly one year ago. This happened after state government-owned Santee Cooper decided the costs would be too much for its customers to pay, and without a business partner, Scana Corp.’s South Carolina Electric & Gas Co. could not continue.

Any of the individual business partners in Vogtle could elect to do the same as a way to cap their own costs. It’s highly likely that the outcome would be the same, and this is something that state elected officials want to prevent.

"We appreciate the interest expressed in the letter to protect energy consumers in Georgia from increasing Vogtle 3 and 4 costs," said Terri Statham, a spokeswoman for Oglethorpe.

"Walking away at this point would be breaking our promise," Deal wrote.

It is clear that Vogtle’s future has led to some debate between the co-owners and the governor in the past, based on Deal’s additional comments.

"While I am certain a legislative solution to resolve short-term concerns could be attractive, I am not convinced that changing our state’s electrical tax structure, rate payment structure or expanding who falls under the purview of the Public Service Commission is the correct path forward."

Yesterday’s letter from the Legislature is the second time the issue of unfair cost allocation has come up in a year. Georgia Power and the public power companies used the same argument to pressure the PSC to ensure Georgia Power could recoup its share of all of Vogtle’s new costs from its customers.

The utilities crafted a new ownership agreement that said if Georgia Power could not get the money from its customers, then any of the public power companies could pull out of the project and Vogtle would fail.

"Southern Nuclear … took over the construction of Plant Vogtle and declared a new day; no more delays and cost overruns," the letter states. "Now, only eight months after what was understood to be the last, highest budget was approved by the [PSC], Southern Company announced $2.3 billion in additional cost overruns in August."

Because this latest increase exceeds $1 billion and Georgia Power is electing to absorb some of that money, the other owners are contractually required to reassess and decide whether they want to finish the reactors.

Neither Oglethorpe nor MEAG has publicly tipped its hand, and there has been no discussion of either one deciding not to move forward. MEAG’s board is scheduled to meet today, but it and Oglethorpe have until Sept. 24 to vote.

JEA is ratcheting up its pressure on MEAG to vote "no."

The Florida municipality this week asked the Federal Energy Regulatory Commission to step in on its contract dispute with MEAG, which owns 22.7 percent of Vogtle. JEA’s long-term power purchase agreement is a portion of that.

This means the dispute is relatively small in proportion despite hope from a wide variety of consumer and anti-nuclear groups that the squabble could lead to Vogtle’s demise. But JEA is not backing down.

Board Chairman Alan Howard this week sent a letter to MEAG’s board chairman saying, among other things, that it had a term sheet for replacement power for both utilities. The replacement energy and capacity would save $2.5 billion, but Vogtle would have to be canceled.

JEA called the offer "money that makes a meaningful difference in the lives of the people we serve."

JEA also placed a full-page ad in the Marietta Daily Journal, complete with a large headline that reads, "Plant Vogtle Will Cost You," and ending with a link to a website noplantvogtle.com and the hashtag #NoPlantVogtle.

The release of the ad follows a lawsuit and countersuit between JEA and MEAG over the 2008 contract. JEA’s arguments include that the Jacksonville City Council did not approve the contract, the terms of which also violate Florida’s Constitution.

For its part, MEAG alleges that JEA is essentially breaching its duties under the contract that it fully understood and knew the risks of from the beginning.