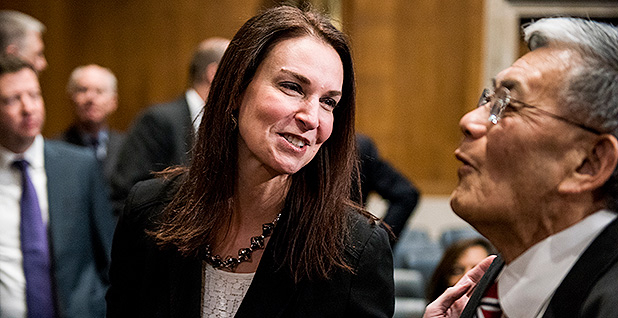 Nicole Nason, the new head of the Federal Highway Administration, tried to delay EPA efforts to regulate greenhouse gas emissions from cars under President George W. Bush, according to three people familiar with the events.

The claims come two weeks after Nason sailed through her Senate confirmation with an overwhelming vote of 95-1, earning bipartisan praise along the way (E&E News PM, March 28).

As FHWA administrator, Nason has broad authority over efforts to assist state and local transportation agencies with sustainability and climate goals. Nason was previously tapped by Bush to lead the National Highway Traffic Safety Administration, another division of the Department of Transportation, in January 2006.

She arrived at NHTSA at an auspicious time. The Supreme Court had just ruled 5-4 in Massachusetts v. EPA that the Clean Air Act gave EPA the authority to regulate carbon dioxide as an air pollutant. The ruling paved the way for EPA’s development of greenhouse gas emissions standards for cars.

That led to tension with NHTSA.

For years, NHTSA had been enforcing corporate average fuel economy standards. While not directly related to emissions, CAFE standards had the similar goal of getting cars to travel farther on a tank of gasoline.

The Bush White House recognized that there was friction between the two agencies, but it asked them to put aside their differences and work together on harmonizing their regulatory regimes.

Nason wasn’t having it.

"When we were coming closer to developing a proposal, Nicole and her team basically were refusing to even respond to my emails," recalled Margo Oge, the former head of EPA’s transportation office.

"Nicole, the White House and EPA political people made certain at the time that our proposal would not be jointly submitted to the [Office of Management and Budget]," Oge said. "So they killed it. That’s the bottom line."

She added, "And that’s how I remember Nicole Nason. Not very friendly to the work EPA was doing."

Another former EPA official, who asked to remain anonymous, had a similar recollection.

"We were trying to coordinate with NHTSA … but they shut it down," that person said. "They refused to return our phone calls and stuff like that. And Nicole was administrator of NHTSA at the time. That directive obviously came from her."

That person added: "Cutting off communication is disrespectful at a minimum. Disrespectful is too nice of a word, OK? It was definitely intended to prevent and impede the work that EPA was doing on greenhouse gases."

Nason was ensnared in a second controversy under Bush.

The New York Times reported in 2007 that Nason had ordered all NHTSA employees not to speak with the press.

"It seems that Ms. Nason has adopted a policy that has blocked virtually all of her staff — including the communications office — from providing any information to reporters on the record, which means that it [cannot] be attributed," the Times reported.

The policy effectively meant that "some of the world’s top safety researchers are no longer allowed to talk to reporters or to be freely quoted about automotive safety issues that affect pretty much everybody," the newspaper reported.

"She also put a gag order on all her staff, and they weren’t allowed to talk to the press. It was really very tightly controlled, the communications," that person said. "They went on lockdown. And all communications went through her office."

‘It wasn’t exactly "Game of Thrones"’

It’s not unusual for EPA to butt heads with other agencies.

Another former EPA official, who requested anonymity to speak candidly, said the agency also sparred with the Department of Energy over the Energy Star program.

That person sought to downplay the tension between EPA and NHTSA under Bush.

"It was plain, natural interagency competition. We used to have it between EPA and DOE on the Energy Star program, and here was another area," the source said.

"It wasn’t exactly ‘Game of Thrones,’ right? We weren’t cutting people’s heads off or anything," the source said. "But we were in different camps."

Nason’s ascendance to the top of FHWA comes as the Trump administration is blocking many of Obama’s climate rules.

In May 2017, for instance, the agency decided to indefinitely delay an Obama-era rule for highway planners. The rule would have required planners to tally and report anticipated greenhouse gas emissions from vehicles traveling on their roads (Climatewire, May 19, 2017).

Greens sued over the decision, while congressional Democrats called the delay "the regulatory equivalent of burying our heads in the sand" (Greenwire, June 29, 2017).

One of those Democrats — Sen. Tom Carper of Delaware — seemed unconcerned by Nason’s nomination to lead FHWA, saying in a statement last month: "I look forward to working with Ms. Nason as we embark on a bold vision for our country’s transportation system."

Sen. Bernie Sanders (I-Vt.), a presidential candidate, was the only senator to vote against Nason’s confirmation. His office didn’t respond to requests for comment.

Asked for comment, an FHWA spokesman said in an email: "Ms. Nason has made clear her commitment to working collaboratively with her colleagues at the USDOT and other partners to improve safety and respond to serious transportation challenges. FHWA isn’t going to comment on unnamed and unsupported allegations by employees at another agency over a decade ago about a highly qualified nominee who was just confirmed by a vote of 95-1."

The spokesman declined to make Nason available for an interview.