New Mexico wildfire puts spotlight on use of prescribed burns 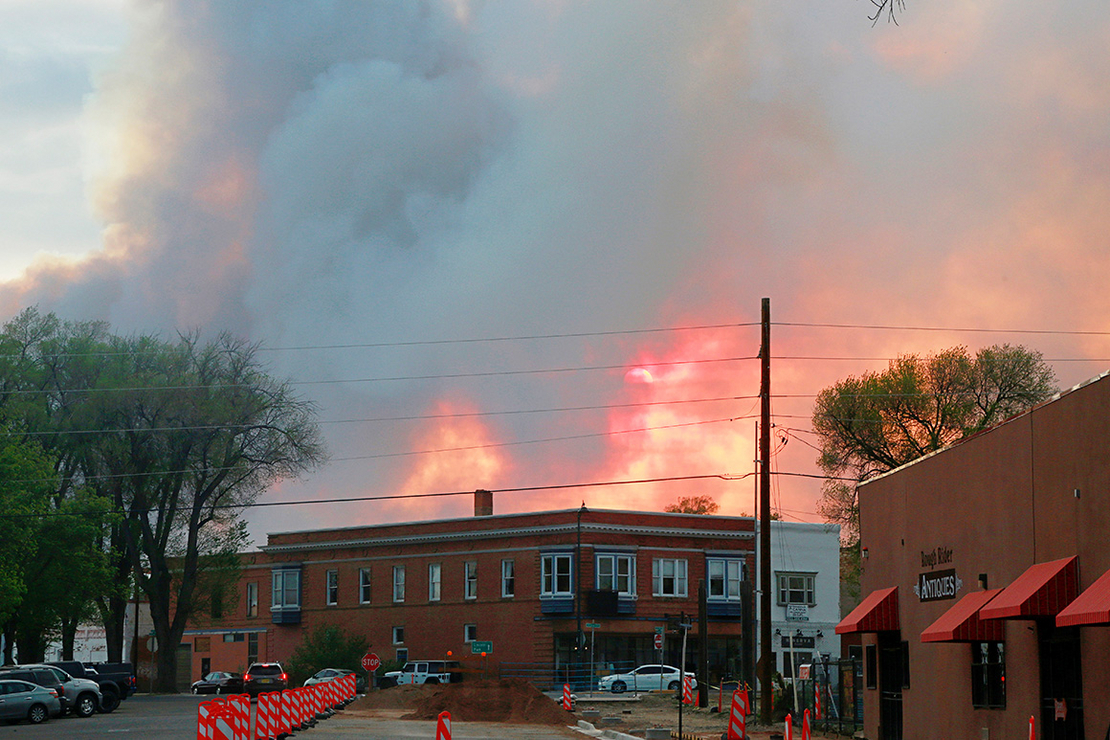 A sunset is seen through plumes of wildfire smoke in Las Vegas, N.M., on Saturday. Cedar Attanasio/AP Photo

A wildfire that’s burned nearly 190,000 acres in New Mexico may become the next talking point in the debate over the use of fire in managing national forests.

The Hermits Peak Fire near Las Vegas, N.M., started as a prescribed burn by the Forest Service, which has been increasingly turning to the practice to carefully reduce underbrush and other potential wildfire fuel in national forests. But the agency’s inability to keep this one in check is already leading to second-guessing.

Sen. Martin Heinrich (D-N.M.) told E&E News he’ll support additional oversight to find out how the intentional fire grew out of hand and to clarify Forest Service policy on the use of prescribed fire — a tool he has supported in the past and which some other lawmakers are trying to boost through legislation, the “National Prescribed Fire Act” (S. 1734). The Forest Service said it ignites 4,500 prescribed fires annually, although the great majority are not in the West or Southwest.

“Prescribed fire is a really powerful tool,” Heinrich said Friday. “But if you screw it up just once, you can lose the social license to use it at all. So we have to have rules that the public can trust.”

In this case, the Forest Service said, a prescribed fire in the Pecos/Las Vegas Ranger District was declared a wildfire on April 6. The fire was initially conducted in appropriate weather conditions, which unexpectedly turned windy and caused multiple spot fires that spread outside the boundary of the prescribed burn.

Because the fire is under review, a Forest Service spokesperson said, the agency can’t comment on the details of the prescribed burn, including whether the agency thinned the area before igniting the fire — a step that forest managers say is usually needed to keep it under control.

That the prescribed burn was allowed in the first place spurred questions from Rep. Teresa Leger Fernandez (D-N.M.), who described herself as “outraged” in a letter to Forest Service Chief Randy Moore last Thursday.

“The removal of deadwood and other fuel biomass through prescribed burns is a necessary tool to prevent wildfires, but it should only be done in the safest conditions,” she said. “Northern New Mexico had an extremely dry winter, is in a prolonged drought and is currently experiencing a warm spring with erratic winds.”

She added, “These conditions are not rare during spring in New Mexico. I, and many in the local communities, were shocked that the Forest Service would perform a prescribed burn during these conditions.”

Officials in New Mexico have warned that conditions are favorable for the fire to spread. And while the National Interagency Fire Center said the blaze is 43 percent under control, the Forest Service reported that it’s burning through conifer forests in rugged terrain that’s challenging for fire crews to access.

The question with prescribed burning, advocates say, is mostly about timing. Lawmakers behind the legislation, including Sen. Ron Wyden (D-Ore.) say the Forest Service should step up its use of fire outside traditional fire season, when cooler and wetter conditions reduce the risk of blazes spreading.

And Heinrich has spoken out in favor of “managed fire” as well, when the Forest Service allows some fires set naturally to burn under monitoring in areas adapted to wildfire.

The winter of 2020, for instance, was a good time for that, Heinrich said at a hearing on the prescribed fire bill last year. “It was an ideal year to actually allow resource benefit fire to occur, which is some of the cheapest treatment and the most manageable treatment that can occur,” he said at a Senate Energy and Natural Resources Committee hearing.

A Forest Service spokesperson defended prescribed fire generally today, telling E&E News in an email that it’s “one of the most efficient and low-cost ways of reducing wildfire risk.”

The spokesperson added, “Regularly conducting low-grade prescribed fires, which mimic nature, reduces and maintains the buildup of flammable vegetation and overgrowth. When wildfires come through an area after a prescribed burn, they are more likely to be smaller, easier to control and much less dangerous.”

And while the New Mexico fire will spur additional debate, it’s an outlier, according to the Forest Service. The agency lights about 100 prescribed fires in the Southwest annually. Nationally, slightly more than 1 of every 1,000 prescribed fires escapes control, or about six a year, the agency said.

New Mexico has some experience with the practice’s usefulness and pitfalls. In 2000, the Cerro Grande Fire around Los Alamos grew out of a prescribed burn by the National Park Service at the Bandelier National Monument. A plan to burn 900 acres turned into a fire that scorched around 48,000, the Government Accountability Office told Congress in testimony at the time.