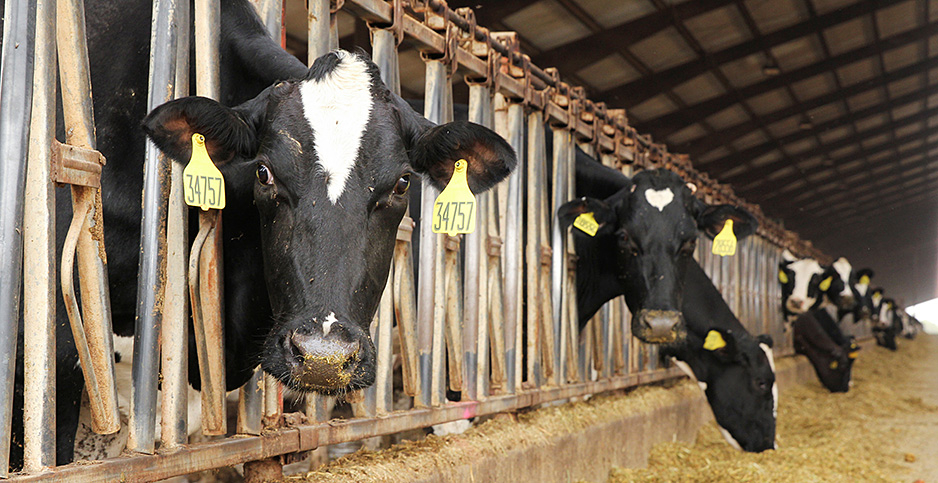 A cow looks up from its feed at the Johann Dairy farm in Fresno, Calif. Nathan Frandino/Reuters/Newscom

There is no silver bullet for climate change. But a Dutch conglomerate thinks there just might be a powder.

Royal DSM, the makers of Bovaer, claim the fine, white powder can protect the planet by suppressing microorganisms in the guts of cattle that produce methane, a gas that traps roughly 80 times more heat than carbon dioxide over a two-decade period. In 2019, the burps and farts of cattle were a larger source of U.S. methane emissions than leaking natural gas pipes, EPA data shows.

The widespread use of Bovaer could cut global cattle methane emissions by up to 20 million metric tons per year, a United Nations Environmental Programme assessment found last month. That’d be the equivalent of zeroing out the annual carbon emissions from 126 coal-fired power plants, according to an EPA greenhouse gas calculator.

But before DSM can sell U.S. farmers on mixing Bovaer in with their cattle feed, it needs the Food and Drug Administration to approve the powder. The FDA process so far has taken more than four years, and the company worries it may last several more, prolonging the day when ranchers can begin slashing their emissions and DSM can start recouping the tens of millions of dollars it’s invested in the product.

Now the head of DSM North America — using President Biden’s own words — is appealing to lawmakers, the Biden administration and the press for help expediting the agency’s review of Bovaer and other potential climate-focused products.

Independent scientists who’ve studied Bovaer said they are frustrated the product is stuck in regulatory limbo. They worry the situation could discourage investment in similar sustainable agriculture innovations.

"The problem is, the FDA process is so slow, and the climate crisis is not waiting for anybody," said Ermias Kebreab, a sustainable animal agriculture professor at the University California, Davis.

The main reason it’s taken years for FDA to review Bovaer — the scientific name of which is 3-nitrooxypropanol, or 3NOP — is because the agency has classified the powder as a new "animal drug," like an antibiotic, rather than a "food additive," such as citric acid, a natural preservative found in lemons, limes and oranges.

FDA’s review of animal drugs is more thorough than for additives. The agency requires proof the drug does what it claims; the company can safely manufacture it; and it’s safe for animals, the environment and people.

The animal drug vetting process, which involves many company-funded research studies and meetings with regulators, typically takes more than seven years, according to a 2019 report from the Department of Agriculture. The Animal Health Institute, a trade group representing animal drugmakers, claims companies spend an average of $30.5 million to win FDA approval for a new product.

DSM argues all that is unnecessary for Bovaer, which independent studies have shown has few impacts on cattle that consume it and potentially major climate benefits. The powder mainly inhibits a group of methane-producing microorganisms that are found in the stomachs of cattle, sheep, goats and other grass-eating animals known as ruminants.

Welsh would like U.S. regulators to take a page from their European counterparts, who have specific rules governing what they call "additives favourably affecting the environmental consequences of animal production." (DSM submitted Bovaer in July 2019 to the European Food Safety Authority for approval, but so far hasn’t gotten the agency’s signoff.)

Welsh already has made his case to the Senate Appropriations Committee’s Democrats and said he plans to talk with Biden White House officials and other reporters in the coming weeks.

"I need to challenge the FDA a bit in their thinking to enable us to bring this product to market," the DSM North America chief said. "We need to create a regulatory landscape that is going to enable more innovation in this space."

The Biden administration can’t meet its commitment to cut emissions in half by the end of the decade "without products like this," Welsh added. "If they are looking for emissions reductions from other things that require large capital projects, they’ll never get there by 2030."

A Senate Appropriations Committee aide confirmed that Welsh met with the Agriculture Subcommittee but declined to comment on the details of their conversation.

FDA spokesperson Siobhan DeLancey said the agency couldn’t confirm, deny or comment specifically on DSM’s request to open what’s known as an investigational new animal drug file for Bovaer. That ask was made in December 2016, according to a letter viewed by E&E News.

"FDA fully supports the Biden Administration’s climate plan and is dedicated to working with drug sponsors to navigate the approval process as efficiently as possible," she added in a statement.

"I think a reasonable solution is for FDA to revise its definition of feed additives to include products like 3NOP or to develop a new regulatory pathway for such products that don’t fit within the agency’s existing categories," Dan Blaustein-Rejto, the Breakthrough Institute’s food and agriculture director, said in an email.

Bovaer is one of several products in development that seek to cut methane emissions from cattle and other ruminants. Some companies are experimenting with feeding cattle seaweed, while others are trying a fermented product dubbed Kowbucha. Agriculture giant Cargill Inc. is even planning to sell burp-catching masks for cows (Climatewire, June 2).

Those products may prove a tough sell. Unlike most animal drugs or additives, they don’t improve the health or productivity of cattle.

Companies would have an easier time pitching farmers on the value of methane-reducing technologies if Congress put a price on greenhouse gas emissions, Welsh said. But that idea remains politically implausible.

Other ways to promote such products could include providing farmers with subsidies or emissions reductions credits, which they could sell on carbon markets, according to Kebreab, who has independently studied Bovaer. The UC Davis professor and head of the university’s World Food Center also noted that California and some other states have set emission-cutting targets that could push farmers to buy DSM’s powder or similar products now seeking regulatory approval.

While Kebreab believes it’s important for FDA to ensure the safety of the emissions-reducing animal products it reviews, he thinks the biggest risk might be slowing the development and deployment of potential climate solutions.

"This is setting a precedent," he said. "People will be discouraged if it’s going to take 10 years, 15 years, for your product to hit the market. Then there’s not going to be much interest or investment in this area."