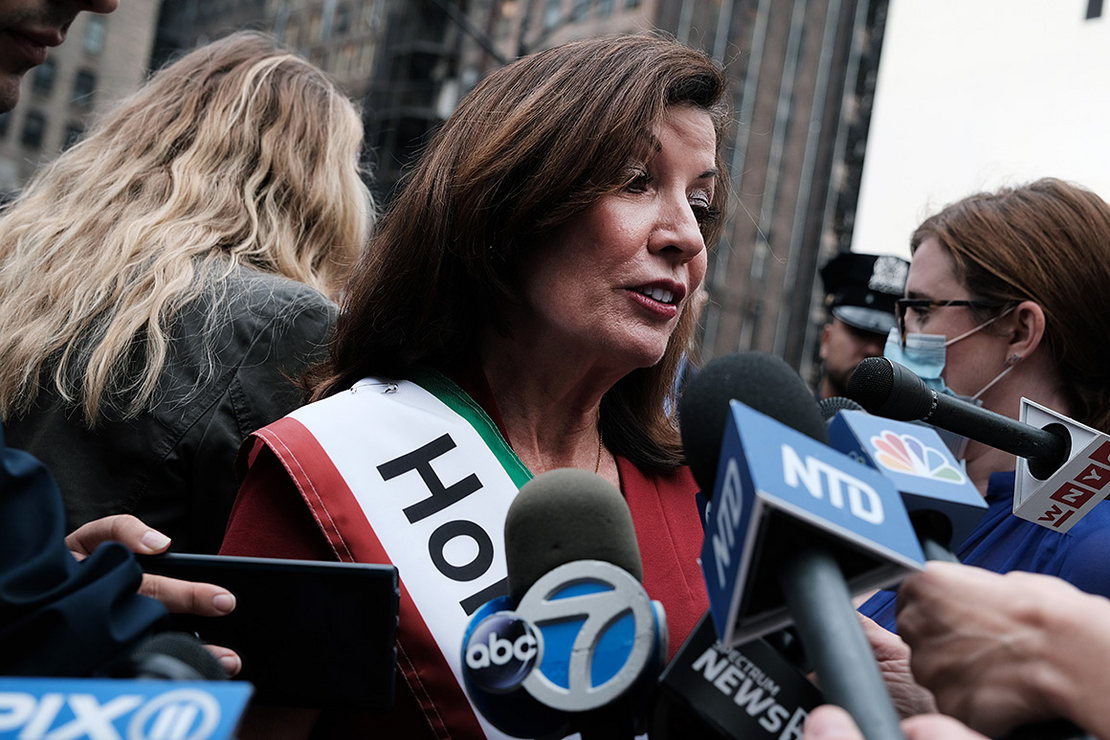 New York Democratic Gov. Kathy Hochul is planning to launch a series of renewable hydrogen initiatives this year in a bid to turn her state into a national center for the energy resource. Spencer Platt/Getty Images

The Democratic governor of New York released a blueprint this month to make the state a national hub for renewable hydrogen, a move that could be transformational for the emerging fuel.

In the blueprint, Gov. Kathy Hochul said she would direct energy and economic development officials to sketch out plans that would link several of New York’s regions into a single network of hydrogen production and consumption.

A "Green Hydrogen Hub" would help New York’s case to tap an $8 billion pot of money for "clean" hydrogen demonstrations created by the bipartisan infrastructure law, according to the blueprint.

Hochul’s announcement injects New York into a competition for the first major injection of federal funds for low-carbon hydrogen — a battle that is stoking debates over what constitutes “clean” versions of the fuel.

Officials in New Mexico and Mississippi, for example, have unveiled tax incentives for hydrogen producers that can scale down their carbon dioxide emissions over the years, and written to the Energy Department to urge support for local projects (Energywire, Dec. 20, 2021).

Environmentalists have often pilloried those plans, particularly when the hydrogen in question would be "blue,” or derived from fossil fuels and paired with carbon capture technology.

Green groups in New Mexico, for instance, have rejected legislation presented by Gov. Michelle Lujan Grisham (D) aiming to subsidize blue hydrogen, saying it would do little to reduce emissions and would go on burdening front-line communities with pollution.

In New York, by contrast, Hochul’s blueprint targets "green" or renewable hydrogen, according to the New York State Energy Research and Development Authority (NYSERDA), one of the three state agencies tasked with drafting the hydrogen plans. Renewable hydrogen is produced by splitting water molecules using wind or solar electricity and does not typically have a carbon footprint.

"NYSERDA is advancing a focused approach on green hydrogen, and will evaluate additional options as part of a comprehensive analysis of hydrogen opportunities in New York State," wrote Smolen.

According to Hochul’s blueprint, New York will submit proposals to the Biden administration for a share of the $8 billion, while supplementing it with a minimum of $1 billion in nonfederal financing. One "key element" of its pitch to the administration would see the deployment of microgrids in underserved communities, where clean hydrogen fuel cell systems could replace emissions-intensive generators as backup power, it said.

This year, state agencies will also design new regulations, prize contests, and demonstration projects that study the use of green hydrogen as a source of heating and cooling for entire communities, according to the blueprint.

Theresa Smolen, a spokesperson for NYSERDA, said "the exact content of the proposal(s) for a Hydrogen Hub … are being determined,” along with the "exact scope and details" of state regulations guiding hydrogen production.

Across the United States, the competition for the $8 billion hydrogen pot is likely to play out over 2022 and much of 2023. Funding proposals of the kind planned by Hochul are due in May, with awards arriving a year later, according to DOE.

A separate battle over hydrogen policy, meanwhile, is brewing in New York, where climate laws require 100 percent carbon-free power by 2040. In the state, environmentalist opposition has emerged for some uses of renewable hydrogen.

Last September, the Independent Power Producers of New York (IPPNY), whose members range from gas and nuclear companies to renewable companies, filed a petition with utility regulators asking them to launch new subsidies to help develop round-the-clock sources of clean electricity. The group focused on sources other than wind and solar.

Developing those resources, which IPPNY said could range from hydrogen to carbon capture or long-duration energy storage, would be necessary for the last leg of the journey to full decarbonization of the grid, argued the group. Two major building trades unions were also co-petitioners.

In a Nov. 12 letter, however, 25 green groups and allied organizations urged regulators on the Public Service Commission to reject subsidies for hydrogen and other resources cited by IPPNY, arguing that it would be "a distraction from the pressing near-term work" necessary to meet climate goals, such as a scale-down of fossil fuels and a rapid scale-up of energy storage.

When used for electricity generation, hydrogen "is not a zero emissions technology, regardless of how the hydrogen is produced," the groups wrote.

If burned directly for electricity rather than used in fuel cells, they wrote, hydrogen would emit nitrogen oxides, at least with current turbine technologies. Besides, creating reliable sources of "green" hydrogen would require lots of dedicated renewables that could otherwise help clean up the state grid.

If renewable hydrogen were to leak from transport lines and escape into the atmosphere, the opponents argued, it could also become an even more potent greenhouse gas than CO2.

The letter’s signatories included national groups like the Sierra Club and Earthjustice as well as local ones like the New York City Environmental Justice Alliance and Environmental Advocates NY.

New York’s debates over hydrogen, however, come as climate advocates continue to raise alarms about lagging investments in new types of clean energy, including hydrogen.

A Jan. 10 report from the Information Technology and Innovation Foundation (ITIF), for instance, highlighted "severe gaps" in the world’s effort to scale up new low-carbon technologies.

Hydrogen, fuel cells, and carbon capture and storage had received just 8 percent of all national research and development investments, the report found, adding that "substantial increases" would likely be "vital" for climate goals.

“It is time for activists, non-governmental organizations, thought leaders, and policymakers to stop saying we already have all the technologies we need and only lack the will to force people and companies to use them — this is false,” said Hoyu Chong, a senior policy analyst at ITIF, in a release that accompanied the report.

“If national governments, in collaboration with the private sector, fail to close the innovation gap … climate goals that today are within reach will quickly slip away," she said.