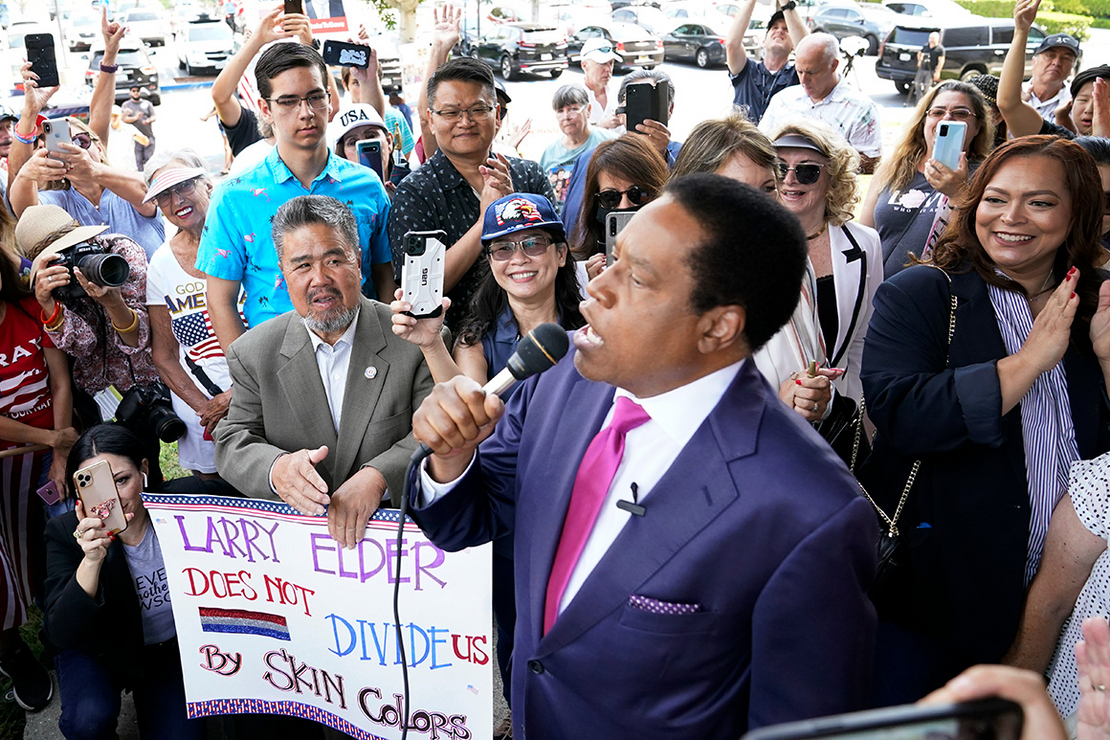 Californians will decide next month whether to oust Gov. Gavin Newsom (D) in a recall vote that could trigger sweeping changes to the nation’s strongest state-led policies on climate change.

A total of 46 candidates are running to replace Newsom, whose administration has faced a relentless series of disasters amid one of the worst droughts in history and a deadly pandemic.

Top Republicans in the race include a conservative radio talk show host and a multimillionaire businessman who campaigns with a Kodiak bear. GOP candidates support building nuclear power plants, more dams for water storage and thinning forests to lower wildfire risk. At least one would delay Newsom’s plan to ban the sale of new gasoline cars after 2035.

Climate change isn’t an issue eagerly embraced by the Republican candidates. But what few statements they have made make it clear that the state could veer sharply away from its policies under Newsom, who describes rising temperatures as an “existential threat.”

“[Newsom’s] surrounded by an army of radicals for whom climate change is a religion — and growth and development a villain,” Republican candidate Larry Elder, the radio host, says on his campaign website.

“Because of their radical environmentalism, they oppose building the infrastructure necessary to supply consistent energy and water to a population of 40 million, leaving us with a crumbling system built in the ‘70’s.”

YouTuber Kevin Paffrath ranks highest in polls among Democrats on the ballot. No well-known Democrats in elected office are challenging the governor.

Polls suggest the race is tight. Although Democratic voters outnumber Republicans by a margin of nearly 2 to 1 in California, Republicans are expected to show up in greater numbers on Election Day. But there are factors that complicate election predictions.

For example, 23.3% of registered voters identify as having “No Party Preference” or as independents. And the secretary of state approved mailing ballots to all voters because of the pandemic. That could counterbalance Republican turnout.

The ballot asks voters just two questions: Do they want to remove Newsom, and, if so, who should replace him? It takes a simple majority to recall the governor. If that happens, the candidate with the most votes will succeed Newsom.That’s true even if that person receives votes well below half. If Newsom is recalled, his replacement will have to run for reelection next November.

Cox, the only leading Republican candidate who agreed to an interview with E&E News, said he accepts climate change as fact.

“The climate is changing. I think humans have an impact,” Cox said. “I don’t think it’s all a disaster either. … There are some salutary aspects of the climate changing.”

He added that “cold weather kills a lot more people apparently than hot weather,” and “some areas that didn’t used to have agricultural capabilities may now have them.”

Faulconer, as mayor of San Diego, supported a climate change plan in 2015 drafted by his predecessor, then interim-Mayor Todd Gloria, a Democrat. (Gloria is now the city’s elected mayor.) In an interview with E&E News at the time, Faulconer said that he didn’t look at climate change “through a partisan lens” (Climatewire, April 7, 2017).

Faulconer doesn’t mention climate change on his current campaign website. However, in a section on electricity, he said as governor he’d “unleash California’s technological might and entrepreneurial spirit to make us more energy-independent, adding middle-class jobs as we build and sell tomorrow’s clean energy.”

Newsom is about 2 ½ years into his first term. He’s supported some of the nation’s most aggressive policies fighting climate change, including an executive order to phase out gasoline-fueled vehicles. He also called for a study on whether the state could be carbon neutral by 2035. That’s 10 years ahead of current California goals.

Newsom’s campaign staff did not respond to numerous requests for comment on whether he plans to use climate change or other green issues to motivate supporters.

During an interview with the Sacramento Bee’s editorial board, Elder was asked whether climate change plays a role in California’s worsening wildfires.

“It is a factor,” Elder said. “What I’ve said is, I do believe in climate change. I do believe our climate is getting warmer, and I do believe that human activity has something to do with it.

“What I don’t believe in is climate change alarmism,” he added. “I don’t believe as [Rep. Alexandria Ocasio-Cortez (D-N.Y.)] does. I think she said two years ago that if we don’t take dramatic action, we’re all going to die. That’s a paraphrase, but she said something to that effect. I think that’s outrageous. I think we’re smart enough to deal with the effects of climate change. And if there’s rising water, we can deal with the effects of that.”

Cox and Faulconer both mentioned the need to boost forest thinning to prevent wildfires.

“Forest management has got to be a big factor here, and I think that’s been deficient,” Cox said in the interview with E&E News. He wants “a lot more removal of dead trees. The estimates I’ve seen are 100 million or more. There’s got to be a lot more effort on it, doing prescribed burns and doing fire breaks.”

He said that would help revive the state’s timber and lumber industries, which he claimed have been hurt by environmental regulations, including those to protect endangered species.

Cox also wants “overwhelming force” to respond to wildfires. “I’m talking dozens of airplanes, maybe as many as 100. … The minute you see a plume of smoke, you send in just plane after plane after plane, loaded with water.”

Faulconer on his campaign site said he would “declare a state of emergency for fires on day one as Governor” and use emergency powers “to speed up the clearing of dead trees and vegetation while streamlining the environmental review process.”

He said additionally that he’d establish a new California Department of Wildfire Prevention.

“We will streamline our approach with one department to coordinate and lead all state wildfire prevention efforts with federal and local governments,” Faulconer said. He added that he’d “hold the utilities responsible for wildfires while increasing forest management to keep fires from starting in the first place.”

Rolling back the gas car phaseout

Cox said he’d make several changes to policies advanced by Newsom. Those include the governor’s first-in-the-nation mandate banning sales of new gas-fueled vehicles after 2035. Cox, who drives a Tesla Model S, said he supports electric vehicles, but not Newsom’s 2035 deadline.

He said he’d push that back many years.

“By 2035 is just not realistic,” Cox said. “We don’t have the electricity generation to power our air conditioners on hot days. I don’t know how we’re going to generate enough electricity to power 25 [million] or 30 million cars.”

Cox did not give a specific year for transitioning to EVs. But when he talked about his support for oil drilling in the state, he said: “We’re gonna have to have some transition away from gasoline-powered engines. I’m for that, but for the next 15-20 years, we’re probably not going to get there. In the meantime, we’re going to need gasoline, there’s millions of people that own gasoline-powered cars … and we’re going to need oil in order to get that gasoline.”

Cox said California’s green policies make living in the state too costly, and that “the middle class is just being squeezed into poverty” and “energy production is a major issue.”

Cox said he opposes the planned shutdown of California’s last nuclear plant, Diablo Canyon in San Luis Obispo County, which is expected to close in 2025. He wants more electricity generated with natural gas, which he said is “a clean fossil fuel.”

On methane, a potent greenhouse gas, he said, “we have to make sure we mitigate that risk and we do a good job of making sure that we don’t have methane leaks.”

He wants California to advance liquefied natural gas and export it to China and India because they burn coal, saying “we would be making a lot of money ourselves. … We could tax it, we could create jobs.”

Elder, the radio host, also wants to increase the use of nuclear power. During the interview with the Sacramento Bee, Elder was asked what he’d do, if anything, to change California’s climate policies and greenhouse gas reduction goals.

“One of the problems is we demonize nuclear,” Elder said. “We only have one remaining nuclear plant.”

He said he opposes the shutdown of Diablo Canyon.

“I should make a case for the construction of nuclear power plants,” he said. “They’re clean burning. They’re safer than they used to be. And I think that there are trade offs on everything. And I also think that we have not invested in … any real infrastructure for water and for energy in something like 40 years when the state was nearly half the population.”