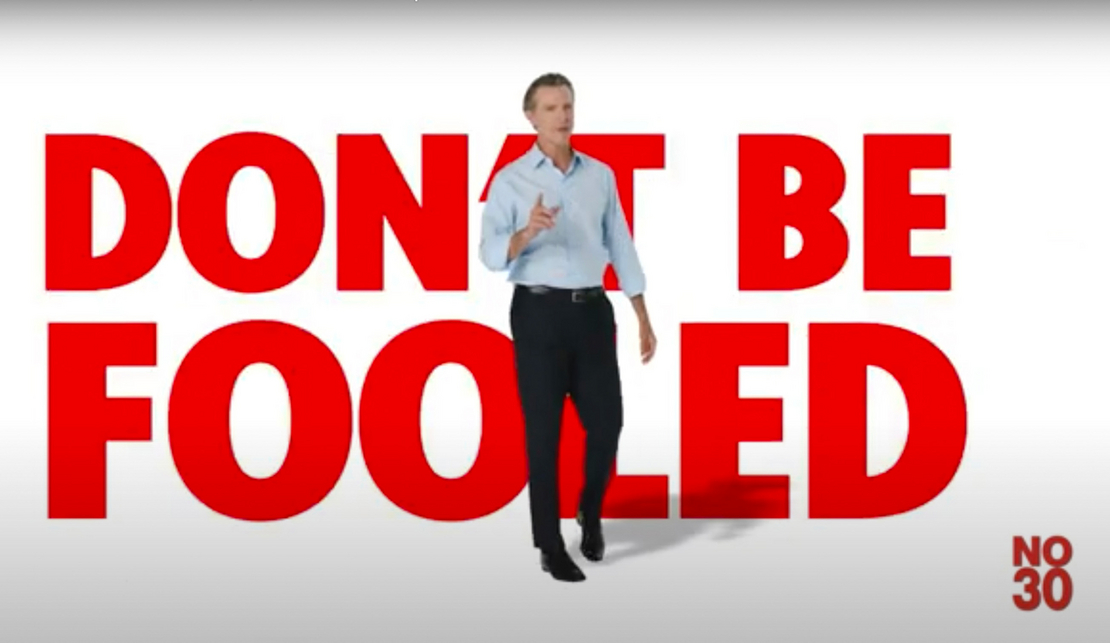 In this frame grab from video provided by the "No on 30" campaign, California Gov. Gavin Newsom (D) urges voters to reject Proposition 30. The ballot measure would raise taxes on people who make more than $2 million a year. Most of the money from the tax would go to programs that help people purchase electric cars. The proposition has received significant funding from ride-hailing company Lyft. No on 30 Campaign via AP

California Gov. Gavin Newsom, who is spearheading efforts to ban new gasoline cars in his state, came out swinging against a ballot measure that would tax rich residents to help fund electric vehicle purchases.

Newsom, a Democrat, stars in a new ad claiming that Proposition 30 would benefit one company — Lyft Inc., the ride-hailing service — rather than accelerate the state’s transition to clean vehicles.

“Prop 30 is being advertised as a climate initiative,” Newsom says in the ad. “But in reality, it was devised by a single corporation to funnel state income taxes to benefit their company. Put simply, Prop 30 is a Trojan horse that puts corporate welfare above the fiscal welfare of our entire state.”

Prop 30 proposes hiking California taxes 1.75 percent on people who earn $2 million annually. The nonpartisan California Legislative Analyst’s Office estimated that the measure could raise between $3 billion and $4.5 billion a year.

The measure, if supported by a majority of voters in November, would require state agencies such as the California Air Resources Board to distribute the money as incentives to purchase electric cars. Advocates suggest that the money would funneled into existing programs than run out of money. Prop 30 also directs money toward EV charging stations and wildfire prevention.

Lyft has given more than $15 million to support the measure, including by funding signature-gathering to get it on the ballot. The company plans to use electric vehicles exclusively by 2030.

“Every Californian can see the climate crisis has arrived. Record-breaking heat waves, wildfires and increasingly polluted air are becoming the norm,” Lyft said in an email. “Prop 30 speeds up a clean energy transition by asking only the wealthiest 0.2% to pay a little more, so the costs don’t fall on working Californians.”

Lyft added that “not a single dollar of Proposition 30 is earmarked for the rideshare industry” and that “Governor Newsom stands with his billionaire donors looking to protect their bank accounts.”

The vote on the ballot measure comes not long after the California Air Resources Board approved a rule that bans the sale of new gas-fueled vehicles in 2035. Newsom ordered the regulation.

It requires automakers who sell cars in California to provide an increasing number of zero-emissions vehicles. But there are worries that consumers won’t buy the cars or won’t be able to afford plug-ins. The average electric vehicle currently costs $66,000.

State rebates and other incentives for EV purchases have run out of money over several years.

Bill Magavern, policy director with Coalition for Clean Air, argued that the main contention made in the governor’s ad is inaccurate.

Newsom said in a statement that he’s opposing the measure because “California’s tax revenues are famously volatile.” “This measure would make our state’s finances more unstable — all so that special interests can benefit,” he said. “Californians should know that just this year our state committed $10 billion for electric vehicles and their infrastructure, part of a $54 billion nation-leading package to fight climate change and build a zero-emission future.”

“This measure would make our state’s finances more unstable — all so that special interests can benefit,” he said. “Californians should know that just this year our state committed $10 billion for electric vehicles and their infrastructure, part of a $54 billion nation-leading package to fight climate change and build a zero-emission future.”

The Legislative Analyst’s Office said that people who make more than $2 million would look for ways to avoid paying the Prop 30 tax, potentially lowering overall state revenues. It also said the measure might not allocate enough funds for administrative costs.

“Prop. 30 is fiscally irresponsible and puts the profits of a single corporation ahead of the welfare of the entire state,” said Dan Newman, a spokesperson for the “No on Prop 30” campaign.

The measure would allocate 45 percent of its revenue toward incentives and programs for ZEV purchases. Another 35 percent would go toward building EV-charging and fuel-cell-refilling infrastructure. The last 20 percent would be used to reduce wildfire risk. The measure emphasizes helping lower-income people. It would stay in effect for 20 years.

California is among 26 states and the District of Columbia that allow citizens to put initiatives on ballots. California requires proposals to get signatures from the equivalent of 5 percent of voters in the last gubernatorial election, or about 623,000 people.

Some political observers have suggested Lyft’s support for Prop 30 might be motivated by California’s bid to rein in the emissions of transportation network companies like Lyft and Uber Technologies Inc. The California Air Resources Board adopted a rule last year that would require those companies to cut 90 percent of their emissions by 2030. The mandate isn’t final, and the California Public Utilities Commission must take action to implement it.

The ballot measure could help ride-hailing companies meet those requirements by encouraging motorists — and their drivers — to buy clean cars.

Opponents of the measure include billionaire Michael Moritz, a venture capitalist with Sequoia Capital, based in Silicon Valley. He’s given $1 million so far to defeat Prop 30. Mark Heising, founder of Medley Partners LLC, an investment firm in San Francisco, also has given $1 million in opposition. Neither man immediately responded to requests for a comment.

In addition to Lyft, a top contributor to the “Yes on Prop 30” measure is the International Brotherhood of Electrical Workers. The union has given $1 million to support the measure.

“We view this as something that’s not only going to generate good new green union jobs, but it’s also threading that needle of addressing climate change in a very meaningful way,” said Gretchen Newsom, political director for IBEW in California. “This is creating new additional funds, a generational investment in combating climate change and supporting California’s climate goals.”

Correction: An earlier version of the story misattributed Newsom’s comments to Dan Newman, a spokesperson for “No on Prop 30.”