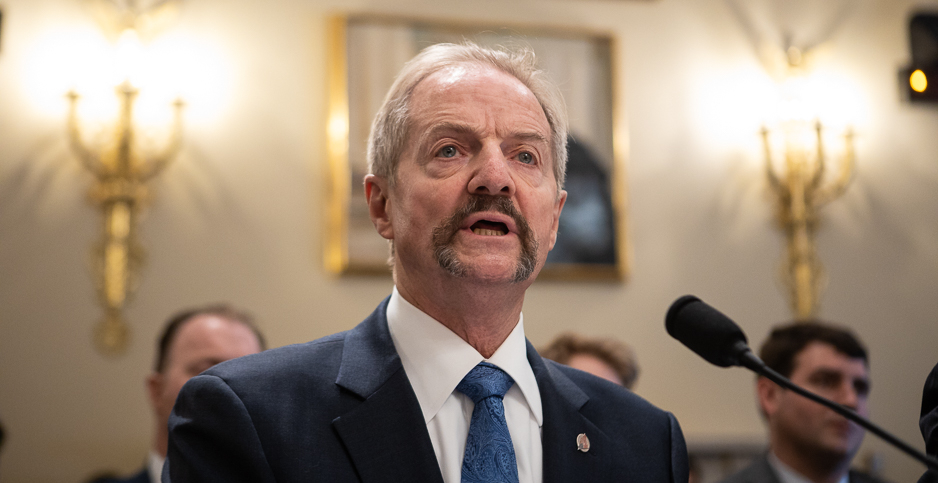 A Colorado newspaper in the city the Bureau of Land Management will soon call home is now formally opposing President Trump’s nomination of William Perry Pendley to lead the agency.

And political observers say the editorial in Grand Junction’s Daily Sentinel may have handed Sen. Cory Gardner (R-Colo.), whose vote on Pendley is key, an excuse to reject Trump’s first nominee for BLM director in nearly four years in office.

"It gives him some cover" to vote no if he chooses to, said Rick Ridder, a partner with Denver-based RBI Strategies and Research, a Democratic campaign-consulting firm.

"Whether or not it gives him enough cover with conservatives and with Trump and his supporters, we’ll see," Ridder said.

The Daily Sentinel editorial surprised some, as the newspaper has been a big supporter of BLM and its planned move to Grand Junction. About 40 senior BLM officials will be stationed at the new headquarters — including Pendley, if the Senate confirms him as director.

BLM in recent months has treated The Daily Sentinel as a friendly media outlet, making Pendley and other top officials available for interviews in recent weeks, while not allowing them with reporters at other media outlets.

The newspaper’s editorial board wrote this weekend that they were "prepared, not too long ago, to endorse William Perry Pendley’s nomination to serve as director of the Bureau of Land Management on the cynical premise that no matter who is put in charge of the agency, the policy agenda is unlikely to change."

But that position changed, according to the editorial, after E&E News reported on a 2017 opinion article in which Pendley wrote that the Black Lives Matter movement was based on a "terrible lie" involving the shooting of unarmed Michael Brown, who was Black, by a white police officer in Ferguson, Mo.

Pendley wrote that because Brown never tried to surrender, as some had claimed, the Black Lives Matter movement is based on "a lie the mainstream media perpetrated, that cowardly politicians, fearful of saying ‘all lives matter,’ emboldened" (Greenwire, June 29).

The newspaper editorial questioned Pendley for "fixating" on whether Brown said, "Hands up! Don’t shoot!" It also took issue with Pendley’s suggestion that the Black Lives Matter movement "has no legitimacy whatsoever" because Brown likely never said the phrase that started the movement.

"So what?" the editorial says. "Whether the victim said it or not, the phrase captured the essence of the fear many Black citizens have experienced when dealing with police. The recent death of George Floyd while in police custody has only reinforced that Black Lives Matters is a just cause."

They conclude that Pendley’s views on social justice issues, coupled with his past controversial positions challenging federal land ownership, disqualify him from leading the bureau that oversees 245 million acres of public lands.

"Pendley has been the face of a fringe movement against federal ownership of public lands, only to be nominated as one of the country’s chief custodians of public lands," the editorial concludes. "He’s the last person who should be criticizing other movements given the incredible pass he’s received thus far over what many consider disqualifying positions on public lands policy."

Gardner has ‘tough questions’ for Pendley

Those words could weigh heavily on Gardner, who is facing a tough reelection bid in November in a purple state that did not support Trump in the 2016 presidential election.

Gardner, who has claimed he was the "architect" behind the Bureau of Land Management’s move to Grand Junction, has used the relocation, and the jobs and prestige it could bring the city and state, as a key component of his reelection campaign.

Gardner appeared onstage with Trump at a campaign rally in Colorado Springs, Colo.,
thanking the president for working with him to make the BLM move a reality (Greenwire, Feb. 21).

"Mr. President, you’ve done so much good for Colorado. As a result of your work, the Bureau of Land Management is now headquartered in the great state of Colorado," Gardner said at the rally.

Pendley, BLM’s de facto acting chief since July 2019, has been the face of the BLM relocation to Colorado, defending it in newspaper op-eds and interviews on mostly conservative radio talk shows as necessary to get bureau employees closer to the lands they manage in the West.

That could make the new headquarters vulnerable if former Vice President Joe Biden, the presumptive Democratic nominee for president, were to defeat Trump in November, the former official said.

Biden has already publicly stated his opposition to the Pendley nomination.

"If Pendley were confirmed, the risk of the new office being quickly swept out of town as part of cleaning up the Pendley stench would be greater," the former official said.

Gardner, for his part, has been noncommittal about Pendley so far. He has stated publicly that Pendley will face "very tough questions" from lawmakers during confirmation hearings.

The Senate Energy and Natural Resources Committee, which oversees the Interior Department, has yet to set a hearing date.

Confirmation hearings are expected to be a political dogfight, as Democrats have vowed to fight Pendley’s nomination.

West Virginia Sen. Joe Manchin, the ranking Democrat on the Energy and Natural Resources Committee, has said Pendley "is not fit" to lead the bureau after his Black Lives Matter op-ed (E&E Daily, July 1).