Next climate challenge: Getting the smoky taste out of wine 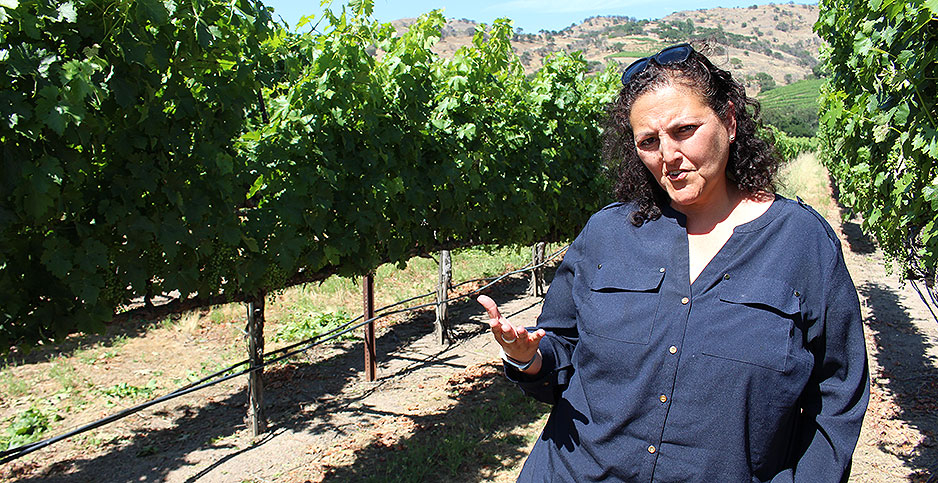 Elizabeth Vianna, winemaker and general manager of Chimney Rock Winery in Napa, Calif., said she hopes the 2017 wildfires -- which burned the hills in the background -- are a "100-year occurrence." Marc Heller/ E&E News

NAPA, Calif. — The wildfires that lit the hills around John Williams’ winery two years ago changed the way he and many Napa Valley growers view climate change and gave birth to a new area of research into "smoke taint" in wine.

"That whole hillside and that whole hillside were aflame," Williams said, his arms outstretched, in his vineyard, called Frog’s Leap Winery, one afternoon this week. "I hope it was a little bit of a wake-up call that something is going on."

And while it’s not certain how climate change will affect temperature and rain here in the long run, the wildfires of 2017 caught the attention of everyone in the wine business and struck fear that repeated episodes might do the industry serious damage.

Wine is big business in California. It’s the source of 3 of every 5 bottles sold in the United States, with an estimated $35.2 billion in U.S. sales in 2017, according to industry estimates. Napa and Sonoma are famous but small parts of the whole, limited by geography and a philosophy that quality matters more than quantity.

The vines themselves aren’t terribly at risk, growers say. Vineyards make a good firebreak, in fact, partly because of the moisture on the premises. A handful of vineyards lost buildings in the fires, but experts said the real danger is the smoke that affects the flavor of wine if the grapes are exposed at harvest time.

The 2017 fires — among 14 that struck Northern California around the same time — are fresh in growers’ memories. The Tubbs Fire in nearby Santa Rosa burned more than 36,000 acres, was blamed for more than 20 deaths, and affected parts of Napa and Sonoma counties.

Williams and most other producers were lucky; as much as 90% of Napa’s wine grapes had already been picked when the fires broke out, according to the Wine Institute, a California industry group. Some who picked the affected grapes made wine anyway and sold it in bulk; others discarded the grapes and swallowed the financial loss.

Vineyards lost electricity. Roads were closed for as long as two weeks, and tourists couldn’t — and wouldn’t — visit, knocking out the tourist tastings and counter sales that offer lifeblood to Napa vineyards.

The fires, if anything, may have awakened the region to the perils of a changing climate, if one of the results is more wildfires in populated areas. Unlike water conservation and other practices farmers can take on to deal with weather-related challenges, people in the business say, growers can’t do much to mitigate the threat of wildfires.

"When we think about tasting smoke in your wine, it’s pretty complex," Brown said, according to a university news release after the event, before putting the issue into broader context. "Climate change is millions of times more complex than that. But we have to figure it out, because this is not about shifting from wine to beer. This is about human existence."

Researchers are also curious whether the distance from the fire — "old smoke or new smoke" — affects flavor differently, Block said. That’s significant because a wildfire that’s many miles away can spread smoke far and wide, but the effect may be dulled.

Memories of the wildfire are still fresh in producers’ minds.

A house on the hills that belonged to the winery’s former owners burned. Fences built to keep deer out, along the ridge, burned, as well, and plastic irrigation tubing melted, Vianna said.

The harvest was almost finished at the time, Vianna said. The relatively small amount of grapes that might have been tainted went into bulk sales; the winery wasn’t about to put its $100-a-bottle label on red wine that might have an off taste, she said.