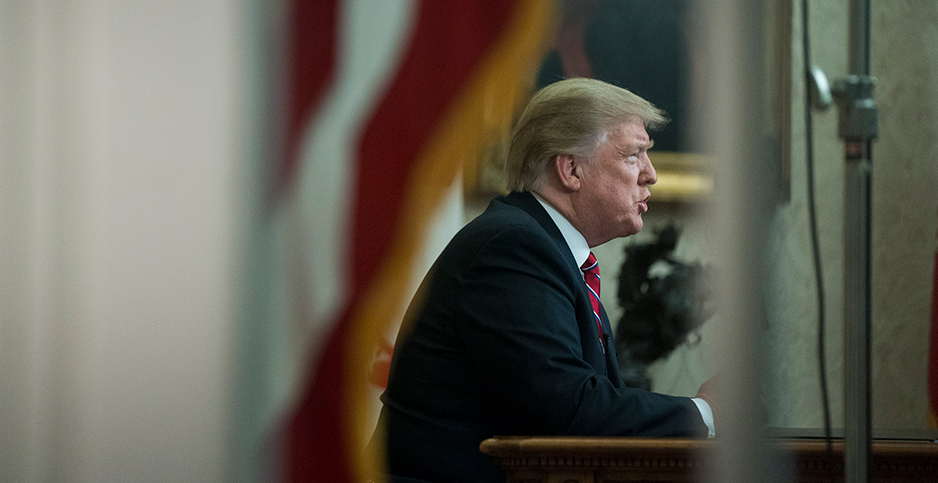 Republicans are increasingly concerned that President Trump’s threat to build a border wall by declaring a national emergency might be repeated by a future president who sees climate change as an existential danger to the United States.

A number of Republicans, including Sens. John Thune of South Dakota and Marco Rubio of Florida, expressed dismay at the potential reverberations of issuing an emergency order to achieve a political victory.

Democrats and Republicans have been clashing for three weeks — the length of the partial government shutdown — over Trump’s demand for $5.7 billion in wall funding. Neither side is showing signs of a compromise, prompting Trump to intensify his rhetoric about violence along the U.S.-Mexico border while pushing closer to an emergency declaration that would empower him to build a wall using the military.

"If this doesn’t work out, probably I will do it," Trump said yesterday of declaring a disaster, before flying to Texas for publicized meetings along the border. "I would almost say definitely."

Even some conservative pundits who support building a wall worry that Trump’s actions on immigration could be harnessed by a future president for climate action.

Former Democratic Sen. Claire McCaskill of Missouri warned Republicans yesterday that climate change is exactly the type of issue that a future president could address by bypassing Congress.

"This is a reminder to my R friends that the Pentagon, Congress, and this administration have all said climate change is a serious threat to national security," she wrote on Twitter. "Will the next President bypass Congress and declare an emergency? This door can swing both ways."

Democrats won’t publicly admit that global warming rises to the level of declaring a national emergency or shuttering the government. More than a dozen Democratic lawmakers in the House and Senate said they would not shut down the government over any issue, including climate change.

Rep. Jan Schakowsky (D-Ill.) said Democrats would be able to get support for climate policy though traditional avenues.

"[Climate change] really is an existential issue for human beings on this planet [and] for the security of our country, and we’re definitely going to do it," she said of addressing climate change. "But it’s not about trading these essential issues, that’s why we have a democracy, that’s why we have order to get things like this done. We just have this intransigent and crazy president, I think a very, very sick man, in the White House who has no capacity to understand issues as important as climate."

"You don’t shut the government down," he said. "We have Republicans who want to join us on climate change issues; we can win on this issue and have the American people with us and have the global community with us."

Rep. Paul Tonko (D-N.Y.) said Democrats believe in government, not in shutting it down.

"We’re about keeping the government open, we’re about dialogue, and that’s what we need here," he said. "My focus this session is bringing us into working order on a plan to address carbon pollution, which is a worldwide crisis. It’s based on science and evidence that requires us to respond with a degree of urgency."

Trump spent his nine-minute Oval Office address Tuesday pressuring Democrats to approve billions of dollars for a border wall. Some say that kind of pressure is needed to marshal funding and policies to tackle rising seas and other climate threats.

"It strains public resources and drives down jobs and wages," Trump said of illegal immigration, a claim that experts immediately disputed. "Among those hardest hit are African-Americans and Hispanic-Americans."

Apply that to climate change, and those words ring true.

Poor and minority communities are the most vulnerable to climate impacts, like sea-level rise and heat waves. Public infrastructure is being destroyed by disasters exacerbated by climate change.

Trump said congressional Democrats "refused to acknowledge the crisis" of border security. The same claim can be applied to Republicans who ignore and criticize climate science.

"Thousands more lives will be lost if we don’t act right now," Trump said in the Oval Office. "This is a humanitarian crisis. A crisis of the heart and a crisis of the soul."

The economic costs of disasters that are sharpened by rising temperatures continue to mount, even as the Trump administration rolls back environmental protections that restrict greenhouse gases. The National Flood Insurance Program is $20 billion in debt, a number driven upward by hurricanes and other extreme weather events, which climate scientists say will be more damaging in the future.

The irony to some experts is that Trump’s concerns about immigration are connected to the changing climate. More refugees stand to flee their homeland in Central America and other regions as food insecurity grows and economies suffer.

"The reason we care about the changing climate is because it is a threat multiplier," said Katharine Hayhoe, an atmospheric scientist and a political science professor at Texas Tech University. "If you think immigration is a problem now, just wait. If you think international competitiveness, or agriculture or water shortages, or the extreme amount of money that is being spent to help cities and regions recover after disasters, if you think any of that is a problem right now, just wait."

The threat from climate change needs an Oval Office address to communicate its seriousness, said Bob Inglis, a former Republican congressman from South Carolina who once rejected climate science but now tries to engage conservatives on the issue.

He said neither immigration nor climate change requires a national emergency declaration. Instead, a Republican president could use the backdrop of the Oval Office to explain that America is prepared to lead the world on climate action. He said he envisions a grand speech that echoes President Kennedy in 1961 at Rice University, where he marshaled the nation’s best science for a race to the moon.

"Climate change is this huge challenge, it’s a worldwide challenge, it’s just a call for American greatness to solve the challenge," Inglis said. "The rest of the world can’t solve it. It does warrant that level of attention from a president, and of course that’s not what we’re getting now."