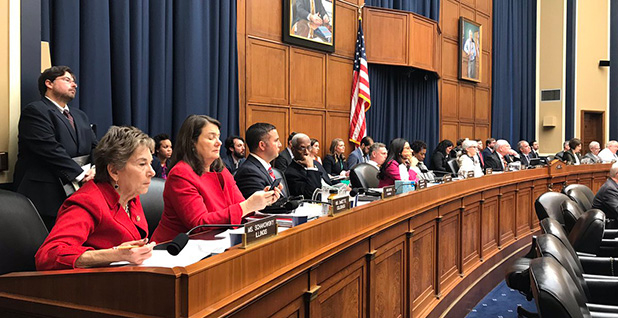 Democrats are looking to hit the ground running after their first climate change hearings yesterday, tackling potentially bipartisan efforts to promote weatherization and energy efficiency as they write a larger bill to reduce emissions.

Rep. Paul Tonko (D-N.Y.), chairman of the Energy and Commerce Subcommittee on Environment and Climate Change, said "it’ll be awhile" before his panel produces legislation, but there are already talks about how to move forward.

"What we’ll do is most likely approach the issue on a two-track system, one that harvests low-hanging fruit," Tonko told reporters after his subcommittee’s climate hearing yesterday. "That includes energy efficiency, conservation, weatherization research, grid modernization, recharging stations that are made more accessible and more effective."

In the long term, Tonko said, the goal is to work on a "carbon price solution," though it’s not clear yet whether that would take the shape of a cap-and-trade or fee-and-dividend plan, or some other type of proposal.

Democrats will spend "the better part of a year" simply gathering information, Tonko said, but the eventual outcome is likely to be a "hybrid," with elements from a variety of existing proposals.

Tonko may have good reason to be optimistic. At his panel’s hearing, Republicans almost unanimously acknowledged man-made climate change, reneging on the skeptical position most have espoused for years (Greenwire, Feb. 6).

"I think what you are seeing is that the world we lived in eight years ago is not the world we live in today," said subcommittee ranking member John Shimkus (R-Ill.), adding that both GOP witnesses at the hearing talked up ways to reduce emissions.

Shimkus said there are "some things we can do together," including climate resilience and energy efficiency measures, but Republicans are still widely opposed to broader efforts to address emissions, especially if they fear it would raise energy prices or move the economy too quickly away from fossil fuels.

Still, that shift in tone is a reflection of what Republicans have long been saying behind closed doors, said Alex Flint, a former Senate staffer who now directs Alliance for Market Solutions, a conservative carbon tax group.

"We spoke with over 80 Republican members of Congress and their staffs in the last year, and only one denied the existence of climate change,” Flint said in an email.

Public recognition is one thing, but Republicans, by and large, still don’t have climate policies they support.

“That’s why you are seeing them discuss innovation," Flint said. “They realize we have to change the energy sector. When the conversation gets to how to induce innovation it will get difficult again.”

For now, Republicans are going hard after the "Green New Deal," even though not even all Democrats support the ambitious progressive policy platform. The plan, which calls for a massive federal jobs program and decarbonization in just a decade, was in many ways their messaging tool of choice yesterday.

Shimkus said the "Green New Deal" would move in a direction Republicans "fear will hurt the economy and the country."

"The acceptance that there is some human activity that affects the climate is probably a good place to start," he said. "Now it really is a focus on what’s really realistic. Decarbonizing in 10 years — that’s not realistic."

Some Democrats agree on that point, but even still, they’re skeptical of the GOP rhetoric. For one thing, the atmosphere at yesterday’s House Natural Resources Committee climate hearing was decidedly more partisan, with ranking member Rob Bishop (R-Utah) questioning whether the issue is even in the committee’s jurisdiction.

"It’s ignoring the issue as opposed to saying it doesn’t exist," he told reporters.

Rep. Kathy Castor (D-Fla.), chairwoman of the Select Committee on the Climate Crisis, added that the real metric of GOP climate belief is yet to come.

"I’m going to be hopeful today," she said after the E&C subcommittee hearing. "The test will come when we craft legislation to reduce greenhouse gas emissions and see where they are."

Tonko also noted there were still skeptical Republicans at the hearing using the longtime GOP talking point that U.S. emissions reductions won’t do much given spiking emissions in developing countries.

"There was still that bit of denial and this fact that we can’t go it alone," he said.

"We pulled out of the Paris accord, not the rest of the world," Tonko added. "They’re committed, they’re at the table."

"One of the things I found interesting was that there certainly seems to be unanimity of opinion on R&D," McEachin told E&E News.

Research and development will indeed be the starting point for Democrats in their two-pronged approach.

"I think Shimkus in particular seemed to be willing to reach out and work on some climate issues, so that was positive I thought," Pallone told reporters.

Longer term, Democrats are still figuring out what they want to do. Rep. Alexandria Ocasio-Cortez (D-N.Y.) and Sen. Ed Markey (D-Mass.) are moving forward with legislative language for the "Green New Deal," but Energy and Commerce members want most of that work to be done in committee.

"There isn’t a specific plan for the Green New Deal," Rep. Darren Soto (D-Fla.) told E&E News. "You could have members file different things that they call the Green New Deal, but these committees are here to determine what it should be."

Soto added that most lawmakers will look to gather more information at hearings before introducing both "aspirational" bills and legislation seeking "to move the bar along in the current climate."

The current climate includes the Republican Senate and President Trump, both of whom have shown little desire to do anything about climate change.

But one potential partner for House Democrats is Senate Energy and Natural Resources Chairwoman Lisa Murkowski (R-Alaska), who has long been interested in energy efficiency and weatherization efforts, particularly as they relate to her home state, which is feeling the effects of increasing global temperatures.

Tonko said he hasn’t reached out to her yet, but he said he eventually wants to have discussions with the Senate side to "build a sound consensus that will get us on track."

Things could get easier once Democrats fully flesh out the "Green New Deal," especially because Republicans won’t be able to define it on their own terms, Tonko said.

For now, Democrats are already looking at the "low-hanging fruit," but centrists are hoping the bigger solution will be bipartisan.