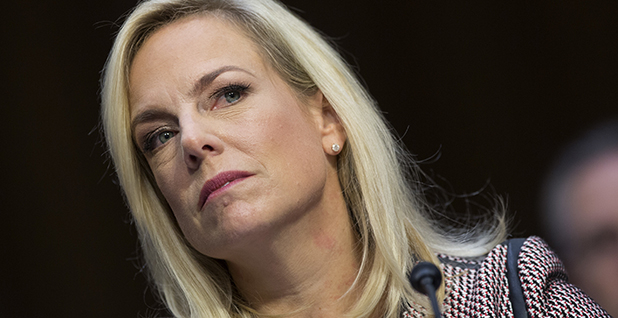 Search the Department of Homeland Security’s website using the phrase "climate change" and you’ll find dozens of reports, plans, statements and fact sheets. For all their variety, the documents have two things in common: They warn about security threats from climate change, and they were written before Kirstjen Nielsen became Homeland Security secretary.

Nielsen leaves office with a record of disregarding climate change that contrasts sharply with predecessors who wrote detailed reports such as the 2012 Climate Change Adaptation Roadmap, the 2013 DHS Climate Action Plan and a chapter on climate change in the 2014 Quadrennial Homeland Security Review.

Nielsen wrote no such reports in her 16 months running the federal government’s second-largest department and was skeptical about whether people contributed to climate change. "I do absolutely believe that the climate is changing. I can’t unequivocally state it’s only caused by humans," Nielsen said during her Senate confirmation hearing in November 2017.

"There’s no evidence as far as we can tell that the Department of Homeland Security did much of anything on climate change or climate adaptation since she started. It certainly was not a priority of hers," said Francesco Femia, co-founder of the Center for Climate & Security, a research group of military and security experts that focuses on the threat of climate change. "It was something the Department of Homeland Security was taking pretty seriously under the previous administration."

Napolitano, secretary from 2009 to 2013, wrote the first DHS Climate Action Plan in 2013, which explicitly linked climate change to homeland security. The report called climate change a "threat multiplier" that exacerbated global poverty and environmental degradation, which in turn create "conditions that could enable terrorist activity and violence."

Johnson, who was secretary during Obama’s final three years in office, wrote a directive in July 2016 that established a DHS policy of integrating climate resilience into risk management, planning and government continuity.

"If you’re not thinking about infrastructure and impacts of climate change and how homeland security might be affected by climate dynamics in the future, then you’re not prepared," Femia said. "We can see these risks coming. The models are accurate on climate change compared to other models" of security threats, he said.

The Federal Emergency Management Agency, a component of DHS, has faced criticism in the past year for avoiding any mention of climate change in major reports. Neither FEMA’s 2018-2022 strategic plan nor its analysis of the failures in responding to the damage caused by Hurricane Maria in Puerto Rico include the word "climate."

"FEMA is the government’s emergency-response agency, and there is a role that FEMA can have in not just disaster response but in building resiliency," said Andrew Holland, chief operating officer of the American Security Project, a nonprofit that analyzes national security threats.

DHS oversees 21 agencies ranging from the Transportation Security Administration and Coast Guard to the Office of Operations Coordination and Countering Weapons of Mass Destruction Office. But under Trump and Nielsen, two agencies — Immigration and Customs Enforcement and U.S. Customs and Border Protection — have been preeminent as Trump has emphasized tighter border security.

Trump’s focus on border security and his skepticism about climate change left DHS leadership with little room to take on the issue.

John Kelly, who ran the department from January 2017 to July 2017 before becoming Trump’s chief of staff, had publicly acknowledged the threat of climate change when he was a Marine Corps general in charge of the U.S. Southern Command from 2012 to 2016. Southcom led Defense Department planning for extreme weather and sea-level rise.

Under Kelly, DHS published a Strategic Sustainability Performance Plan in June 2017 that listed "climate change adaptation and resilience" as one of its 10 goals.

Kelly’s stature as a former four-star general and the respect he appeared to have from Trump enabled him to talk about climate change. But Nielsen, a former adviser to President George W. Bush who worked in the private sector during the Obama administration, did not have such freedom.

"I don’t think she ever had the status or leeway to say those kinds of things" about climate change, Holland said.

Femia of the Center for Climate & Security said that Nielsen’s uncertainty about whether climate change is caused by humans is "a perspective that is beyond the pale at this point. Even within the national security and homeland security community, there’s a very broad consensus that climate change is both a national security issue with homeland security dimensions to it, especially how it impacts critical infrastructure at home."