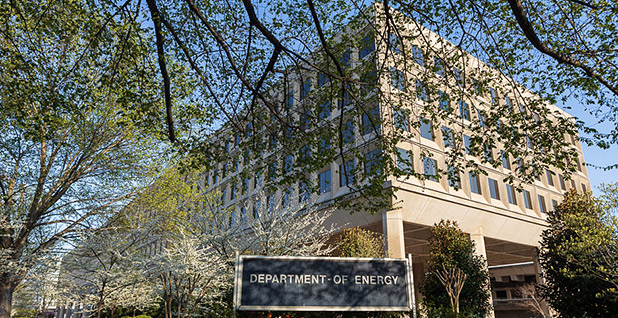 The Department of Energy has released return-to-the office plans that will result in waves of employees returning to a changed environment: Most meetings will be held via computer, and there will be no cafeteria or gym at its headquarters as employees are encouraged to wear masks.

The department, which includes about 100,000 federal employees and contractors across the country, has reported fewer than 200 cases of coronavirus across its facilities.

The opening guidelines for the Washington headquarters and other DOE facilities across the country set no dates for beginning a staggered return, but Energy Secretary Dan Brouillette told employees in an accompanying email yesterday that "as the country begins to cautiously ‘reopen,’ it is time for us to begin the process toward a return of normalcy in our day-to-day work."

The National Treasury Employees Union, which has said workers have expressed worries about returning to offices, is hoping for more details after a briefing tomorrow, said the union’s chapter president, Karen Griffin.

"We have concerns about the whole process, and we’re hoping for additional information," Griffin said.

NTEU National President Tony Reardon in a letter to Brouillette earlier this month said the union hoped to discuss recommendations it has developed to ensure a safe return, including COVID-19 testing for all employees, cleaning and disinfecting workspaces and common areas, physical distancing, supplies of hand sanitizer, wearing masks or cloth face coverings in the workplace, and maximizing telework for employees with children (Energywire, May 8).

The guidelines released yesterday do not mention COVID-19 testing for employees.

Brouillette said the plans recognize that opening dates will depend on the mission of the facility and local conditions.

"As we move forward, your health and safety will remain our number one priority," he wrote in the email.

The plan says the department will rely on guidance from state and local governments, and will note stay-at-home orders, business, school and day care closures and other factors such as public transportation. For example, the plan states, at DOE’s primary headquarters in the District of Columbia, about 80% of employees depend on mass transit.

Washington Mayor Muriel Bowser last week extended the district’s stay-at-home order through June 8, but it could be moved up.

DOE says the return will be carried out in four phases, starting at its current phase zero — which includes planning and is estimated to take two or three weeks.

The plan allows employees who are at a greater risk for serious complications from the coronavirus, such as those with high blood pressure or heart disease, to continue to work remotely until phase three. In addition, employees who live with or provide care to more vulnerable individuals would not be required to return to the office until phase three, which the plan says is assumed will begin approximately two weeks after phase two.

The third phase would consist of most employees returning to work on-site and resuming their pre-COVID-19 schedules.

The plan notes that all offices will be sanitized, a process that began May 4.

Returning employees will be told they may not enter the workplace if they have flu-like symptoms, including a temperature over 100.4 degrees Fahrenheit.

Social distancing protocols will also be enacted, including encouraging, but not requiring, employees to wear face coverings, especially in high-traffic areas such as hallways and on elevators.

"In-person meetings will require recommended social distancing (six feet) between participants and will include a limited number of attendees," the plan says. "Conference rooms and auditoriums will have modified seating and capacity controls to ensure social distancing." The plan notes that some office spaces will also need to be redesigned to allow for social distancing.

Some training requirements and a drug testing program that was suspended in April for six months because of the pandemic would resume in phase three, along with reopening child care centers and cafeterias for self service and seating.