No end in sight for courtroom battle 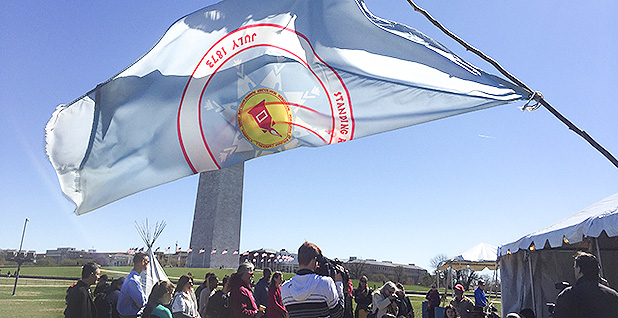 The Standing Rock Sioux Tribe's flag flies upside down at the Native Nations Rise demonstration on the National Mall in March. Photo by Ellen M. Gilmer.

The once fever-pitched battle over the Dakota Access pipeline has largely fallen off the public radar in the weeks since the Trump administration approved the project, protesters cleared out and oil began flowing.

In the courtroom, however, the clash continues. Tribes and allies have staked out their positions against the government and the pipeline company, and a snarl of legal claims remains unresolved.

Lasting legal fallout over the Dakota Access pipeline remains to be seen, but other impacts of the conflict have already taken hold.

Chief among them: a greater sense among developers of the risks of rapid public organizing against a project.

"They don’t want to attract the attention of the protests more than anything else," said Brandon Barnes, litigation analyst for Bloomberg Intelligence. "The companies are used to contending with permitting and legal challenges. These things happen all the time. But the new variable now is social media."

Organizing and campaigning against projects that affect Indian Country may be more important than any courtroom battle, activist Chase Iron Eyes said.

"It’s pretty clear that United States jurisprudence doesn’t really have a grasp or a respect for Native nations," he said. "We’re not going to win by hiring the best lawyers. That’s not how this works."

Following the Dakota Access battle, alleged impacts to American Indian tribes have featured more prominently in opposition efforts targeting other oil and natural gas projects, including the Atlantic Coast pipeline in the Mid-Atlantic and the Sabal Trail pipeline in the Southeast.

"Tribes definitely have their antenna up now, and they’re paying attention to these infrastructure projects around them," said John Dossett, general counsel for the National Congress of American Indians. "It seems to me more likely that tribes are going to hear about these things earlier, pay attention earlier, are going to get engaged more quickly."

Dossett noted that the Dakota Access drama put federal agencies and developers on notice, too.

"Litigation isn’t in anyone’s best interest, so hopefully there will be more effort to involve the tribes early, work with them and avoid whatever problems the tribes want to avoid," he said. "If that doesn’t happen, there may be some future litigation, and I think the tribes will be better prepared for it the next time around."

Cheyenne River Sioux Tribe Chairman Harold Frazier, who has helped lead opposition against Dakota Access, said tribes are talking to one another more about how to effectively engage with industry and the federal government.

Tribes that generally welcome oil and gas development and other extractive industries will have to play a careful balancing act, said Kevin Washburn, former assistant secretary for Indian affairs at the Interior Department during the Obama administration. The Dakota Access battle has meant increased pressure on leaders of many of those tribes to push back on some development proposals.

"The fury that has been focused on the DAPL developers may well be turned on others in the future, including tribal officials if they appear supportive," Washburn, now at the University of New Mexico, said in an email. "In sum, these kinds of developments might be viewed as toxic in Indian country even if they are proposed by developers who work more collaboratively and constructively with tribal communities."

"These big infrastructure projects that run directly contrary to tribes or that threaten reservations are going to be radioactive for a long time," he said.

"Everybody is writing epitaphs and moving on, but there is still a very active court case here," said Jan Hasselman, the Earthjustice lawyer who has represented the Standing Rock Sioux Tribe in its legal battle since July.

Indeed, the central environmental claims in the case have yet to get full airing in court. While a federal judge in Washington has rejected legal maneuvers based on historic preservation and religious freedom arguments, he has not issued any rulings on the environmental issues that sparked the litigation last summer.

According to the Standing Rock and Cheyenne River Sioux tribes, the Army Corps of Engineers violated federal law and tribal treaties by conducting an overly narrow review for the project — even though the oil pipeline crosses a portion of the Missouri River just a half-mile from Standing Rock’s reservation.

The tribes are now seeking what’s known as summary judgment, asking the U.S. District Court for the District of Columbia to decide the environmental claims in their favor. If they win, Dakota Access could face huge disruptions.

"If the permits were granted illegally, as we believe, then the pipeline will have to be turned off until the process is fixed," Hasselman said.

Some court watchers are skeptical about how far the tribes’ claims will go. In any case, the legal uncertainty nags as the project nears commercial service.

They all want the same thing: a court decision resolving the crux of the case in their favor. Judge James Boasberg is likely to schedule a hearing soon to consider arguments from both sides.

The tribes’ main request has remained the same throughout the litigation. They want the Army Corps to perform an in-depth environmental impact statement (EIS) for the pipeline rather than relying on a less-detailed environmental assessment (EA) completed last summer.

Obama officials in December agreed to do an EIS to consider tribal impacts and alternative routes. The Trump administration reversed that decision this year.

"The EIS process would put us exactly where we were before in making our case to the government and to the public that this was the wrong place to put a pipeline," Hasselman said.

But the tribes may have an uphill battle in the district court. Though Boasberg has not yet ruled on any environmental claims, he has been receptive to previous Army Corps arguments that the agency followed its standard process in reviewing parts of the pipeline.

The corps is also entitled to some deference from the court on how it conducts standard permitting.

"The issues the tribes are raising in terms of why [the EA] was improper fall squarely into: This agency has a lot of leeway on the scope of the review," Bloomberg Intelligence litigation analyst Brandon Barnes said. "Under the current case law, that’s right. This is the province of the Army Corps to decide how expansive this review should be."

Barnes says a win for the tribes could represent a major expansion of the agency’s obligations when considering whether to approve water crossings for infrastructure projects like Dakota Access.

"From a common-sense perspective, what you’re asking the court to do is tell Army Corps that from now on when they have pipeline crossings, even though it’s running next to an existing pipe and it’s going underground, they have to do a full EIS for each one of those," he said. "This is wading into generally accepted EA territory."

But if Boasberg does side with the tribes and agrees that the EA was faulty, the question becomes the proper remedy. The tribes have asked the court to order a new EIS, vacate existing permits and halt pipeline operations.

It’s possible, though, that the pipeline will be able to continue operating even if the tribes win.

"It’s going to depend on what he deems the failure to be and whether or not it is so substantial that it needs to be dealt with only in the context of the stay," ClearView Energy Partners analyst Christi Tezak said.

Tezak noted that, in 2014, a federal court remanded a natural gas pipeline’s environmental review to the Federal Energy Regulatory Commission, but the line was allowed to remain in operation while the agency conducted additional analysis.

While the core conflict moves forward, several smaller but significant battles are also playing out in the district court.

“Everybody is writing epitaphs and moving on, but there is still a very active court case here.”

Boasberg last week resolved a bitter dispute between the tribes and Dakota Access over whether certain spill-response documents should be withheld from the public (Greenwire, April 7).

He’s also weighing requests from both tribes to update their legal complaints — initially filed last year — to include religious freedom claims and arguments that the Trump administration illegally reversed Obama officials’ decision to conduct more in-depth review for the pipeline.

Up at the U.S. Court of Appeals for the District of Columbia Circuit, lawyers for Cheyenne River continue to push the tribe’s complaint that the presence of the pipeline desecrates Lake Oahe waters used in religious sacraments. The district court rejected the argument last month, and the tribe appealed.

The D.C. Circuit has denied a request for an emergency freeze on pipeline work while the case moves forward. Briefs in the appeal are due in May and June.

Finally, the district court has a stack of claims to consider from other Sioux tribes. The Yankton Sioux and Oglala Sioux, both of South Dakota, filed separate lawsuits challenging the Army Corps’ approval of Dakota Access, and their claims were recently consolidated with Standing Rock’s case.

And after the district court issues a final decision on the various tribes’ claims against the project, another round of litigation is likely to follow at the D.C. Circuit.

Despite the complex legal tangle, Tezak says investor concern has leveled off in recent months.

"From the investors’ perspective, folks are keeping an eye out on the long view because it’s something that’s unresolved," she said. "But do I think they see it as a huge vulnerability? No. I think they keep an eye on it in case it goofs up."

Barnes agreed, asserting that the Army Corps’ arguments have an edge in the case largely because he expects the court to defer to the agency’s judgment on the proper scope of review.

Still, he said, a win for the tribes could have huge impacts for pipeline backer Energy Transfer Partners (ETP) and other developers.

"It’s never 100 percent sure if you’re still in court," he said. "An adverse decision for ETP here would potentially expand the scope of these reviews for Army Corps that would flow into other pipelines. You balance that against the new administration coming in and putting its people into place, and there’s a tension there."

Craig Stevens, spokesman for the pro-pipeline Midwest Alliance for Infrastructure Now, dismissed the ongoing legal battle as "the cost of doing business."

"Unfortunately, fighting unwarranted litigation of these lawful infrastructure projects has just become part of the cost of doing business in the United States," he said. "Companies and government agencies follow the letter of the law just to be hauled into court and go through the procedural motions.

"While it won’t stop energy and infrastructure development, it will add costs and potentially restrain economic growth," he added.

Hasselman noted that a courtroom victory could still be a narrow one — without sweeping implications for other pipelines. The broader precedent is already in motion, he said.

"Oil may be in the pipeline, but nobody at Energy Transfer looks at this and thinks, ‘What a great success it’s been,’" he said. "They have lost many hundreds of millions of dollars. Their name and reputation has been greatly damaged. It’s not like anybody’s out there thinking, ‘Oh, great, we can walk all over Indian tribes now.’ I don’t think anything ever happens again that looks like this."