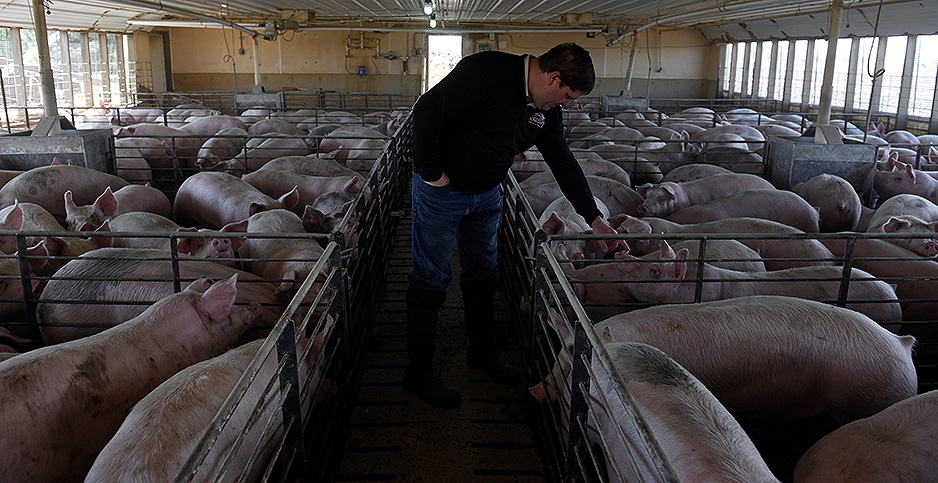 Hog farmer Mike Patterson, who has put his animals on a diet so they take longer to fatten up due to supply chain disruptions, walks through one of his barns on his Kenyon, Minn., property. Nicolas Pfosi/REUTERS/Newscom

President Trump’s order this week for meat-packing plants to stay open despite the coronavirus pandemic presents challenges, but closing plants comes with its own set of issues.

Farmers have been forced to euthanize tens of thousands of pigs, cattle and other livestock, with more on the way as the industry struggles to resume production at levels near pre-pandemic levels. The government can’t compensate farms for those lost animals, though, because they weren’t sick, House Agriculture Chairman Collin Peterson said yesterday.

Even with Trump’s order in place, supply chain disruptions continue to have a ripple effect that won’t go away soon. Farmers are lobbying for aid, and the industry is still figuring out how to handle animals once they’re euthanized in meatpacking plants or on farms, where burying them carries environmental concerns.

Farmers will need an additional jolt of help in the next coronavirus aid package, Peterson said.

Speaking at an event in his Minnesota congressional district, Peterson, a Democrat, said he’ll push to give the Agriculture Department more leeway to compensate farmers for the tens of thousands of animals being killed because closures prevent them going to market.

"I’ll get the secretary authority to pay producers retroactively," Peterson said at the livestreamed news conference, where he and other officials wearing face masks touted JBS USA Holdings Inc. for converting a meatpacking plant into a euthanizing facility.

"It’s going to be in there, I guarantee you," Peterson said.

The outlines and timing of the next measure in Congress aren’t clear, but several agriculture groups have been pushing for additional help. Lawmakers already provided $9.5 billion in direct assistance in a recent measure to help fill the gap from lost markets. They boosted funding for USDA’s Commodity Credit Corp., which can buy farm products.

But the CCC money has run out, lawmakers say, leading to calls for another dose of aid.

Also complicating the picture are questions about how much direction Congress should give USDA in distributing assistance. Peterson said he opposes a bill by members of his own committee, including Reps. Cindy Axne (D-Iowa) and Austin Scott (R-Ga.), to provide $50 billion to the Agriculture secretary’s office without dictating where to use it. He said he’s talking to the bill’s sponsors to give the measure more direction.

Pork producers have been hit especially hard. They are dealing with lost income as well as a lack of access to Small Business Administration loans due to restrictions on how those funds are awarded. Producers have to have shown a profit in 2019, and as much as a quarter of the hog industry doesn’t meet that definition, according to the National Pork Producers Council.

The NPPC predicted in a news release that many generational family farms could face bankruptcy.

The pork industry in particular faces the challenge of handling extra animals safely, humanely and in an environmentally responsible way. Peterson said he had initially thought carcasses managed by JBS could be buried in a 12-foot trench at a local landfill, but the water table is too high there.

Farmers can compost animals on their property, but that’s an expensive measure that requires mixing with wood chips, Peterson said. Other animals can go to rendering plants if they’re close enough.

"There is no good answer," Peterson said.

The meat industry has been hobbled by two pandemic-related issues: plant closures due to sick workers and crumbling demand due to the closure of restaurants. As much as 70% of the bacon sold in the United States goes to restaurants, Peterson said.

Trump’s executive order Tuesday to keep meatpacking plants open could ease the situation, and industry groups such as the North American Meat Institute — representing meatpackers — praised the move. Peterson said Agriculture Secretary Sonny Perdue told him over the weekend that he’d like some plants to open within a few days.

But Peterson and other officials in Minnesota said workers will need personal protective equipment, and because of the need for distance between employees, plants won’t be able to move as many animals as before the pandemic.

The JBS plant retooled to euthanize animals can do with about 10 workers, he said, although it’s likely to fall short of the 13,000 animals a day that the congressman earlier this week predicted.

The crisis has given animal welfare groups an opening to criticize meatpacking practices, and skeptics of the industry have stepped up calls for consumers to eat less meat.

Researchers at the University of Michigan and Tulane University said in a study that replacing half of animal-based products with plant-based foods would prevent more than 1.6 billion tons of greenhouse gas emissions by 2030.

"The COVID-19 pandemic has exposed the meat supply chain’s vulnerabilities, but our food system faces even greater long-term threats from climate change," said Stephanie Feldstein, population and sustainability director at the Center for Biological Diversity. "We desperately need policymakers to support sustainable diets and a resilient food system."

JBS, in a 2018 sustainability report, said the company is 89% on the way to reducing greenhouse gas intensity by 20%.

The Animal Welfare Institute said JBS had more animal welfare violation reports than any other meat company from 2016 to 2018, including "multiple incidents of failing to stun animals before shackling and hanging them to be dismembered, likely causing the animals excruciating pain."

The organization’s mission includes to "abolish factory farms, support high-welfare family farms, and achieve humane slaughter for animals raised for food," according to its website.