‘No more energy.’ Trump warns of depression under Biden 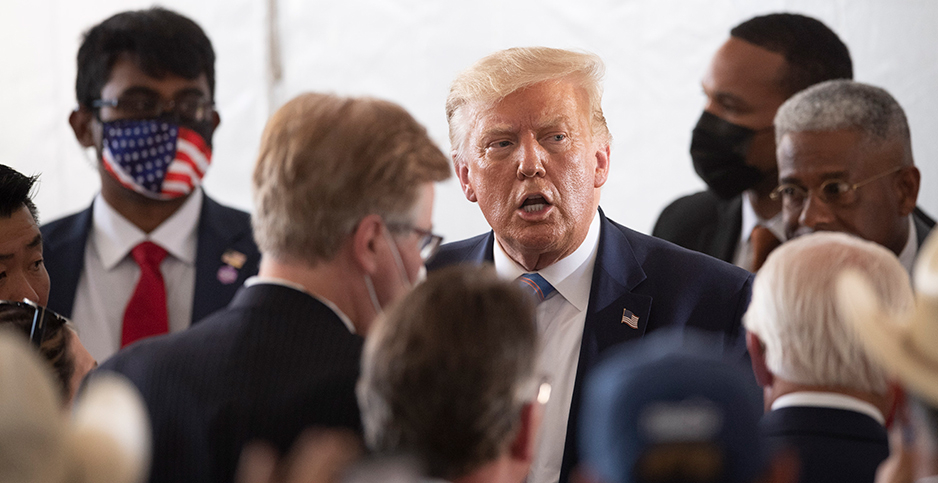 The visit, which comes less than 100 days before Election Day, also doubled as a chance for Trump to take credit for a boom of oil and gas development in the Permian Basin over the last three years. At a stop at a Double Eagle Energy oil rig, Trump made the case that the good times would end if he wasn’t reelected.

"As long as I’m your president, we will never let anyone put American energy out of business, which is what they’d like to do," he said of his Democratic opponents.

As part of the trip to Texas, Trump announced plans to extend export terms for liquefied natural gas through 2050 and to approve more pipelines.

He didn’t say much, however, about the environmental regulations his administration has spent three years rolling back — which the White House said would be on the agenda.

But Trump did frequently use the bully pulpit to attack his political opponents. If Democrats gained control of Washington, he said, they’d ban fracking, implement the Green New Deal and kill fossil fuel development in the Permian Basin.

"If they got in, you will have no more energy coming out of the great state of Texas, out of New Mexico, out of anywhere," he said. "The U.S. energy industry would grind to a halt, and every single energy-producing state would be plunged into a depression."

Trump’s chief rival, presumptive Democratic presidential nominee Joe Biden, has outlined a broad climate agenda, but he has not embraced a fracking ban as some of his primary rivals did. Notably, oil and gas development expanded greatly during Biden’s time as vice president under President Obama.

Before visiting the Midland, Texas, oil rig, Trump met with donors at a fundraising luncheon in Odessa — the "capitol of the Permian" — where attendees paid up to $100,000 for a closed-door lunch and roundtable.

The trip comes as polls show a statistical dead heat in the state between Trump and Biden. Trump has sought to paint Biden as a supporter of the Green New Deal and an opponent of Texas’ petroleum industry (Climatewire, July 29).

Oil and gas production in the Permian faltered this spring as states shut down their economies in an attempt to slow the spread of the coronavirus. The lockdowns squelched demand and sent oil prices briefly into negative territory.

But there’s evidence the industry is rebounding. Rystad Energy, a research firm, estimated that new well operations in the Permian would match their April levels this month — a pace of recovery not seen in other oil fields.

Ed Longanecker, president of the Texas Independent Producers and Royalty Owners Association, said the state’s industry supported more than 320,000 jobs directly during the first half of the year — a decrease of almost 40,000 from 2019.

"We will see a modest uptick in rig count and drilling activity among the more efficient operators this year, with a more significant increase in demand and energy development expected in 2021," he said.

Longanecker credited Trump’s deregulatory agenda and tax policies with helping facilitate the boom that producers in the Permian enjoyed before the coronavirus — and would see again.

"The president’s visit to the Permian Basin today is further evidence of his administration’s focus on supporting the U.S. oil and natural gas industry, including continuing to streamline regulations for oil and gas production, LNG permitting, and infrastructure investment — which will help spur our nation’s economic recovery," he said.

The oil and gas sector has been a beneficiary of three years of Trump regulatory rollbacks. The administration’s move this month to constrict National Environmental Policy Act reviews will benefit pipelines and other infrastructure.

The Bureau of Land Management also finalized the rollback of Obama-era waste prevention rules for gas produced on public and tribal lands — though that’s still moving through the courts.

EPA, for its part, announced in March that it would relax enforcement requirements for a variety of sources during the pandemic. And it’s expected to finalize a rule early next month that would scrap Obama-era restrictions on oil and gas methane in favor of limited requirements that leave large segments of the oil and gas supply chain unregulated.

EPA Administrator Andrew Wheeler said on a webinar hosted yesterday by the Heritage Foundation that a long-delayed regulatory package is still "moving ahead."

He noted that multinational oil majors and other companies have urged the Trump administration to keep more comprehensive rules in place.

"We’re looking at what the impact would be on small- and medium-sized American companies," he said, adding that deregulation would be good for "American jobs."

While the Permian lacks ozone monitoring, research by the Environmental Integrity Project last year showed that production may be contributing to smog. Smog, in turn, has been linked to asthma and other respiratory illnesses.

The Rev. Gene Collins of Odessa, who chairs the Environmental Justice Committee for the NAACP in Texas, acknowledged that oil and gas provides employment for Odessa’s diverse population. Hispanic residents make up more than 60% of its citizens with a smaller Black population.

"It’s a working-class community. We depend on the petrochemical plants around us and also the drilling," said Collins.

While development has brought jobs, Collins said the boom in new independent operators working in the Permian has also brought air pollution that exacerbates respiratory and other conditions.

It can result in accidents, too. An Odessa oil field worker and his wife were killed last October after inhaling hydrogen sulfide gas from a leaking pump house.

Collins, 68, blames petroleum pollution for his reliance on a nebulizer to help him breath. He said Trump’s anti-regulatory message wouldn’t be cheered by everyone in Odessa, where even some local oil and gas companies favor stronger rules.

"I think he’s pandering in his visit here," he said. "He’s just trying to put together a narrative that some of the people want. But when it comes to the health of our families and our children, we have the science that proves that what’s going on right now is detrimental."

Texas has become competitive this election due in part to public dissatisfaction with the way Trump and Gov. Greg Abbott (R) have handled the coronavirus crisis. As of yesterday afternoon, the Lone Star State had seen more than 418,000 confirmed cases and 6,763 deaths — many from a surge of infections that began after the state’s economy reopened for business.

Research suggests that populations that have long-term exposure to air pollution are more likely to endure hospitalization or death if they’re infected with COVID-19 (Greenwire, July 17).

When EPA finalizes the package now being reviewed at the White House, Texas will have no methane limits in place for oil and gas.

Some in industry have touted voluntary initiatives they say have brought down the methane intensity of production. But the Environmental Defense Fund and its allies released satellite data this month that showed the venting of natural gas has increased since the economy tried to move out of lockdown last month.

The Permian is the most prolific oil field in the country, and EDF’s research shows it’s also the largest contributor to methane emissions.

Thomas Singer, who is based in New Mexico for the Western Environmental Law Center, said deregulation wouldn’t help the industry if it didn’t improve its image with the public and investors as a major source of pollution.

"Using environmental rollbacks to prop up this industry is sticking your finger in a dike," he said. "This ignores industry’s own culpability in damaging their social license to operate due to their massive impacts on the climate and local communities and water resources and other values."