No Senate confirmation? No problem 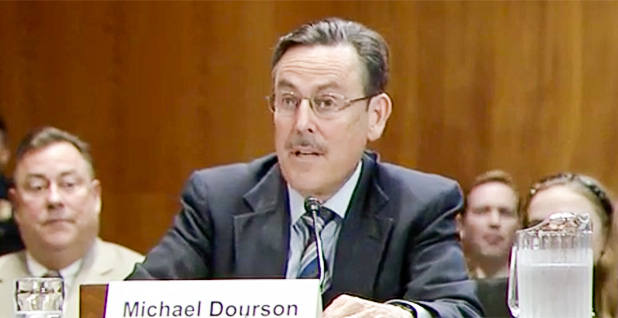 Some Trump administration nominees, like U.S. EPA chemicals pick Michael Dourson, already are working at agencies they have been nominated to help lead. Senate Environment and Public Works Committee

President Trump is installing nominees at federal agencies to serve as "advisers" without a stamp of approval from Congress.

U.S. EPA was the latest to grab national attention after it became public that Trump’s pick to lead the Office of Chemical Safety and Pollution Prevention, Michael Dourson, was already working there.

And Susan Bodine, the president’s choice for assistant administrator of enforcement and compliance assurance, began working at EPA last month as special counsel to EPA Administrator Scott Pruitt on compliance.

But EPA is far from alone.

The Energy Department has hired at least three of Trump’s nominees, including former energy lobbyists, lawyers and executives, without the Senate’s blessing.

Currently serving as a senior adviser in a "limited capacity" to Energy Secretary Rick Perry is former energy lobbyist Mark Menezes, whom Trump nominated to serve as undersecretary for management and performance.

Also working as an adviser at DOE is David Jonas, Trump’s pick to serve as general counsel. Former utility executive Bruce Walker, the nominee for assistant secretary for the Office of Electricity Delivery and Energy Reliability, is also working at DOE, according to the agency’s personnel registry made private earlier this year, in an unknown capacity.

To be sure, the practice isn’t new — it’s been occurring since the 1990s — and laws including the Federal Vacancies Reform Act of 1998 require nominees to remain an arm’s length from the program and policy they could one day shape.

But watchdogs say figuring out who’s been hired and how influential they may be is the tricky part.

Jeff Hauser, executive director of the Revolving Door Project at the Center for Economic and Policy Research, said agencies often don’t announce new hires, leaving the media to lean on the Freedom of Information Act, solid sources or Congress. And if there’s no paper trail, it can be difficult to tell how much authority nominees are exerting within the agencies.

"It’s very tough to conduct oversight without an organizational chart," he said.

Paul Light, a public policy professor at New York University, has one piece of advice for nominees who head to work before Senate confirmation: Steer clear of your future office.

"They may have no role whatsoever in the development of policies, the pursuit of administrative actions directly related to their job for which they’ve been nominated," he said. "You can have them down the hall, you can talk to them, but the biggest mistake they are likely to make is to believe they are already in office."

Why do nominees jump aboard ahead of time?

Perhaps they made a costly and difficult move to Washington or left their job to avoid a conflicting position, Light suggested.

Dourson, for example, said he "accepted a new job" as explanation for leaving his post Oct. 16 with the University of Cincinnati, according to a document obtained by E&E News through an open records request (E&E Daily, Oct. 18).

Light said about 60 percent of Trump’s nominees will end up coming from Washington — with K Street providing the largest source of candidates — as part of a trend that’s grown stronger over past years.

With many of Trump’s nominees having ties to the industries they will be regulating, calls are growing for greater oversight.

"You want to make it easier for them to say ‘yes,’ but you don’t want to violate the constitutional principle of advise and consent," Light said, "nor are you allowed to violate the hands-off policies embedded in federal statutes and regulations."

The ethics obligations that nominees currently face under the Federal Vacancies Reform Act of 1998, Hauser noted, are a direct response to then-President Clinton’s decision to make Bill Lann Lee first assistant to the attorney general in charge of the Department of Justice’s civil rights division.

Clinton named him acting assistant attorney general after the Senate declined to confirm Lee in that job.

In March, the Supreme Court found the law bars a president from appointing a person who’s been nominated for a Senate-confirmed post to serve on a temporary basis in the same role (Greenwire, March 21).

In a 6-2 opinion, the court found the 1998 Federal Vacancies Reform Act bars the acting service of nominated officials except when a person is nominated by the president for reappointment to another term in the same office.

Watchdogs like Hauser are calling for greater transparency at federal agencies about who’s hired, under what authority and which ethical restrictions new employees face.

When asked about Dourson’s job description and duties, EPA did not immediately respond.

A spokeswoman for DOE said Menezes and Jonas are working "in a limited capacity as limited term [Senior Executive Service] appointees" and neither is fulfilling any duties of the offices for which they await confirmation but did not provide further detail.

Jeff Navin, DOE deputy chief of staff during the Obama administration and co-founder and partner at Boundary Stone Partners, said any nominees who have a conflict of interest are required to report the issue and recuse themselves.

"That applies to political appointees like the secretary, down to any other rank-and-file official," he said. "The ethics office will ensure that the appropriate recusals and protections are in place, and if there are violations, they will be covered under federal ethics statutes."

Light suggested career staff will keep close watch. "I think the civil servants who are right [down] the hall are going to keep an eye out," he said.

While the DOE and EPA nominees raise questions, Hauser said there are more glaring violations in the federal government.

He pointed to Keith Noreika, a former financial industry lawyer who’s now a special government employee at the Office of the Comptroller of the Currency while also serving as the agency’s head.

Senate Democrats have since asked the Treasury Department’s Office of Inspector General to launch an investigation and force Noreika to either step down or become a permanent employee and face more stringent ethics requirements.

"To my knowledge, there’s never been a head of a bureau like the Comptroller of the Currency who’s a special government employee," he said.