No U-turn, but new CEO begins to mold NRG’s future 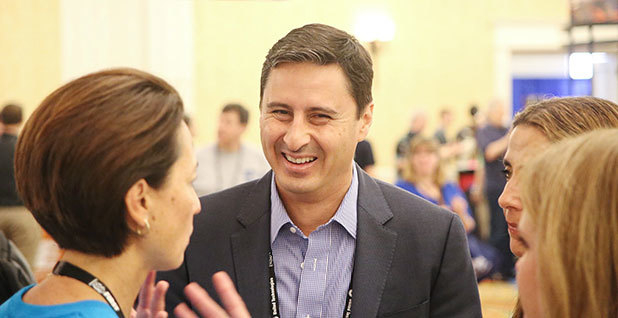 Mauricio Gutierrez, who became CEO of NRG Energy Inc. last December, says sustainability should be at the center of the company's decisions. Photo courtesy of NRG Energy.

Six months after becoming CEO, Mauricio Gutierrez is sharpening his vision for NRG Energy Inc. by reaffirming the company’s interest in renewable energy and battling climate change while insisting on financial discipline.

The chief executive outlined his thoughts both in a recent interview and in a letter for NRG’s latest sustainability report, which is out today. Gutierrez, 45, is steering the company to balance what he calls environmental, economic and social responsibilities as it tries to create value. He’s also endorsing previous NRG goals to slash carbon dioxide emissions.

The comments provide a way for Gutierrez to put his public stamp on a company long associated with David Crane, who pursued both green and fossil fuel investments during a 12-year run as CEO (EnergyWire, March 8). Gutierrez’s NRG is clearly a descendant of Crane’s, though the tone and priorities are different.

The new CEO saw a management change as a chance to review NRG’s assets and where the company was heading. Gutierrez embarked on a listening tour to hear from employees, investors and customers, as well as some environmental and regulatory voices.

Gutierrez, speaking recently by phone, said most people aren’t against a cleaner and more reliable energy future. It’s a matter of how to get there.

He has proposed changes at NRG, including attempts to simplify the company, cut costs and pay down debt. He also moved to reintegrate and rework some renewables operations, not jettison them altogether. And Gutierrez, who joined NRG in 2004, remains comfortable discussing CO2 and climate change — favorite topics for Crane.

"I don’t think people should expect a 180-degree change in the company because I’m at the helm," said Gutierrez, who formerly served as chief operating officer. "I tend to be very consistent."

The market seems to like Gutierrez’s approach so far. Through yesterday, NRG’s stock had climbed about 46 percent in 2016 and 59 percent since its close on Dec. 2, 2015 — the day before the CEO change was announced. Gutierrez, who worked his way from the trading floor to chief executive, expressed respect for Crane and NRG.

"I just happen to have the honor to lead it now," Gutierrez said. "And there are things that I felt that needed to be changed, and I am changing them."

The focus at NRG is on wholesale and retail electricity operations. With generation mixes sure to change, the CEO described a "reliability bridge" that stretches perhaps a decade or more.

Natural gas and renewables likely will see their share of generation rise as coal’s portion drops, he said. Finding a better way to capture carbon dioxide emissions remains on the wishlist. Quick-starting gas units and batteries are in the industry discussion.

"It’s a continuous process," Gutierrez said. "Our goal is to ensure that we have a portfolio that is the right portfolio for the different stages that we see in our markets."

Crane, in a letter for the previous sustainability report, focused much of his attention on CO2 emissions and climate implications. He used characteristically strong language to describe the discussion.

"When it comes to climate change, the caustic barbs of denial from the children of darkness are of little consequence; what is important is allaying the fears and converting the apathy of the children of light so they stand together," Crane wrote. "With us. And with you."

Gutierrez’s letter this year comes across differently, but the new CEO stressed the importance of electricity in human life and called fighting climate change the most significant challenge of "our generation." He said sustainability should be at the center of the company’s decisions.

And Gutierrez reaffirmed NRG’s goal of reducing carbon dioxide emissions 50 percent by 2030 and 90 percent by 2050 from a 2014 baseline.

"I invite you — colleagues, investors, customers, partners and all consumers of electricity — to join us in this journey toward creating an energy future that is cleaner, more reliable and that enables us to continue improving people’s lives for years to come," Gutierrez said.

NRG’s new report notes commitments to climate action and outlines the company’s work in renewables, retail and generation. It also tracks employee and community achievements and has discussions on the environment and NRG’s supply chain. The company, with headquarters in Princeton, N.J., and Houston, cites drops in various emissions from its U.S. power stations in 2015.

Gutierrez offered further thoughts in a statement to EnergyWire, describing a "major shift" in the industry from coal and oil in generation to renewables and gas. He said environmental policies, inexpensive gas and the economics of wind and solar are helping drive this change. Reliability, he said, will remain important throughout the transformation, as recognized by system operators.

"I expect this ‘reliability’ period to last many years until the grid can demonstrate that it can operate at the same level of reliability with the new generation mix," Gutierrez said, adding that centralized and distributed facilities would coexist.

During an interview, Gutierrez used an analogy for new energy sources and the need to show they can keep the lights on: A 16-year-old encounters a big insurance premium when he or she first begins to drive, but that can go down as the driver performs well. Or the premium might never go down for certain drivers.

At the close of 2015, NRG’s North American generation capacity totaled more than 51,000 megawatts, including certain properties associated with NRG Yield Inc. More than 15,000 MW — or about 30 percent of the total — was tied to coal. Another 48 percent came from natural gas, with 11 percent from oil, 9 percent from renewables and 2 percent from nuclear.

Gutierrez said he believes in climate change and sees a moral responsibility for the industry and company on the subject. Does he view the generation mix as a drag, given global trends?

"If there is a price for carbon, I think we’re going to incorporate that into our decisions and we’re going to make the right decision for our plants," he said, adding: "I actually think that we as a company and we as a country need this type of generation today."

Gutierrez was concerned about a range of fuel sources with the low price of gas, which often affects the price of power. Benchmark U.S. gas prices have been trading for less than $3 per million British thermal units, according to Bloomberg data.

He said the focus needs to be on five, 10 or 20 years from now, saying a gas facility can produce about half the CO2 emissions of coal.

"If we believe that we’re going to be in longer-term in a carbon-constrained world, we need to think about a way to actually capture carbon on coal plants, and for that matter, on all fossil fuel plants, right?" he said, "because we focus on coal today, but we’re going to be focusing on gas tomorrow."

"While NRG remains a complex business, we believe it’s moving in the right direction," Macquarie said, indicating that debt restructuring and changes in the balance sheet were in the plans.

Gutierrez said home and other renewable operations will be critical to the transformation of the industry, so NRG needs to be at the "forefront" on renewables. But some decisions can be difficult, such as a "pivot" with the residential solar business, which had been losing money (EnergyWire, May 6).

NRG had been trying to integrate acquired businesses, Gutierrez said, and sought strong growth during a period with uncertainty on net metering and tax incentives as well as low gas prices and limits on accessing capital.

"We needed to refocus that business," Gutierrez said. "We needed to provide a business model that actually makes sense for our shareholders, that we show them a path to value creation, that we focus on our strengths, that we partnered with people that were perhaps better than us in doing certain parts of the value chain."

Last month, NRG said it would sign deals and install home solar systems before selling the contracts to partners. The home solar head count was expected to drop by about 500 people as a result of NRG’s refocusing plans. For context, all of NRG had 10,468 employees as of Dec. 31, 2015, according to a regulatory filing.

While acknowledging that uncertainty is tough on morale, the CEO said clarity on the path has helped.

In his sustainability letter, Gutierrez said NRG must be disciplined with resources, flexible in thinking and flawless in execution. He said being able to adapt and endure will be key, citing a partnership involving NRG’s electric vehicle charging station business. NRG previously announced a plan to sell a majority stake in the venture.

As a recent interview neared its end, Gutierrez described a company positioned for success with a range of fuels, locations and technologies and an integrated approach in wholesale and retail electricity.

"I don’t know if it’s the old or the new," Gutierrez said when asked about his vision for NRG.

"I think I’ve laid out a very specific plan for the company," he said. "I think people will draw similarities and will draw differences. I think this is the right path for the company. I said that the successful company of the future is one that — in the competitive market — is one that needs to be diversified."