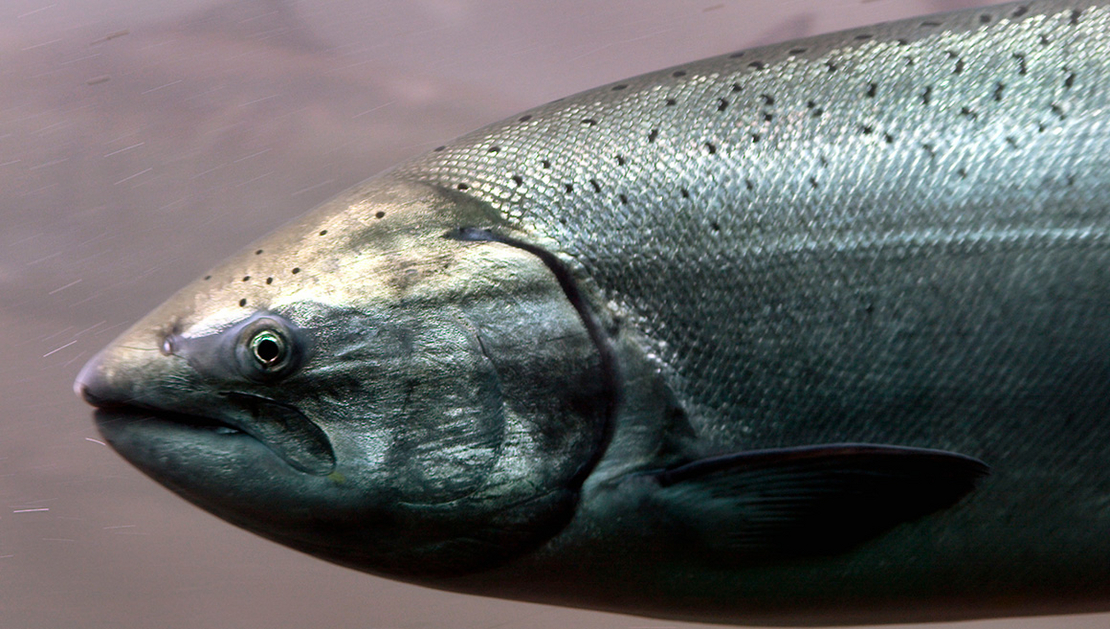 A chinook salmon passing through the viewing room at McNary Lock and Dam in 2005 on the Columbia River near Umatilla, Ore. Jeff T. Green/Getty Images

The White House today touted a new analysis from federal scientists that found breaching a series of four dams in Washington state is “paramount” to efforts to restore salmon populations in the Pacific Northwest but stopped short of endorsing the action.

Another report also highlighted by the Biden administration underscored the steep costs associated with removing the dams, including higher consumer energy bills and the need to replace as much as 2,700 megawatts of power.

For more than 30 years, governments have poured billions of dollars into species mitigation efforts for salmon and steelhead populations in the Columbia River basin, but the fish remain on the verge of extinction due to warming waters and predators.

In its draft report, NOAA recommended the breaching of the Ice Harbor, Lower Monumental, Little Goose and Lower Granite dams.

“The importance of the comprehensive suite of actions listed above cannot be overstated. It is also important to recognize that, within this suite, several centerpiece actions are paramount for specific stocks,” the report states. “For Snake River stocks, it is essential that the lower Snake River be restored via dam breaching.”

The report — which will be reviewed by state and tribal fisheries managers over the next 30 days before being finalized — also calls for establishing fish passage routes in the upper Columbia River, including the areas around Grand Coulee and Dworshak dams.

But in a statement touting the draft’s release, the White House Council on Environmental Quality emphasized that “the administration has not endorsed the Columbia Basin Partnership Task Force’s goals at this time or the particular actions identified in today’s draft science report.”

“Business as usual will not restore the health and abundance of Pacific Northwest salmon. We need a durable, inclusive, and regionally-crafted long-term strategy for the management of the Columbia River Basin,” CEQ Chair Brenda Mallory said in a statement.

Mallory also pointed to the other report out today that examines the impacts of removing electric generation from those same four dams on the lower Snake River.

“These two reports add to the picture — that we are working alongside regional leaders to develop — of what it will take over the decades ahead to restore salmon populations, honor our commitments to Tribal Nations, deliver clean power, and meet the many needs of stakeholders across the region,” she said.

The second report, commissioned by the Bonneville Power Administration, found that removing the four dams could result in annual costs of as much as $860 million by 2045, and increase household electric bills by as much as 18 percent in that same period.

That analysis, conducted by the San Francisco-based Energy and Environmental Economics Inc., (E3), found that breaching the dams would require other energy sources to replace between 2,300 and 2,700 megawatts of power.

“Replacing the four lower Snake River dams while meeting clean energy goals and system reliability is possible but comes at a substantial cost, even assuming emerging technologies are available,” the report states.

“The long-term emissions impact of removing the generation of the lower Snake River dams will depend on the implementation of the Oregon and Washington electric clean energy policies,” the report states.

House GOP lawmakers led by Washington Rep. Dan Newhouse have rallied against the removal of hydropower on the Snake River, arguing it would harm the local economy (E&E Daily, June 10).