NOAA launches ‘the next Lewis and Clark expedition’ 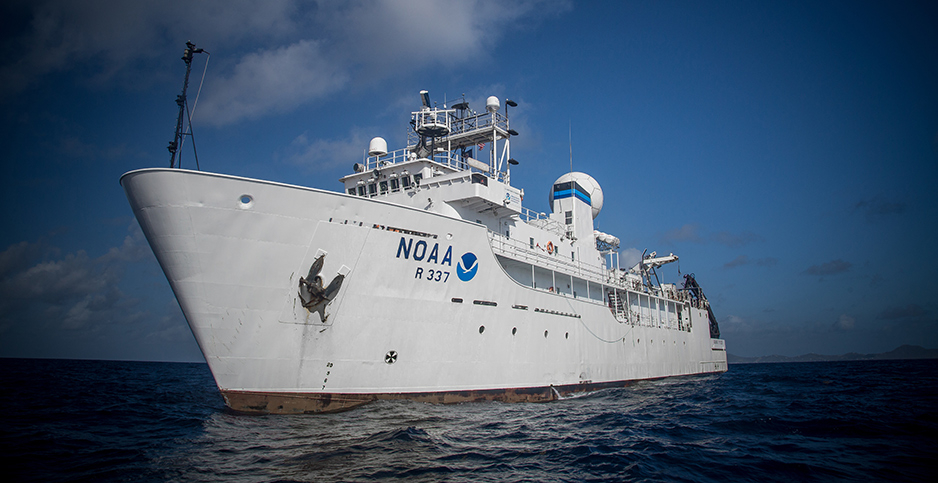 With little fanfare, President Trump in November declared the United States would "act boldly" on a gigantic task: mapping a chunk of ocean floor that’s larger than the combined land area of all 50 states.

Armed with this strong backing from the White House, NOAA is ready to go where no man has gone before. The agency this year plans to accelerate exploration of the entire U.S. Exclusive Economic Zone, with the goal of completing the job by 2030.

NOAA officials say they’re following in the footsteps of Lewis and Clark and the nation’s pioneering astronauts.

The undertaking is "fairly audacious," as one top official described it. But the work is already underway, with roughly 40% of the EEZ mapped in recent years. The zone covers more than 13,000 miles of coastline and 3.4 million square nautical miles of ocean.

NOAA Deputy Administrator Timothy Gallaudet, who’s overseeing the agency’s big push, figures there’s no reason that ocean exploration can’t do for NOAA what space exploration did for NASA a half-century ago.

"Every time I’m on the [National] Mall — I usually run on the Mall every day at lunchtime — I will see a kid in a NASA shirt," Gallaudet said. "I wanna see a kid with a NOAA shirt — and maybe with an ROV and an AUV on it."

An ROV is a remotely operated vehicle, while an AUV is an autonomous underwater vehicle; both pieces of equipment will be used to help NOAA map the Exclusive Economic Zone.

Oceanographers liken it to having robots mow the lawn — a very big lawn. With technology changing rapidly, NOAA officials say machines could be doing the work by themselves by the mid-2020s.

"You send these robots out on a mission — what we call mowing the lawn — to just run a pattern over the seafloor, to not only get a sense of what the topography is, but also to get video of what’s on the seafloor," said Alan Leonardi, director of NOAA’s Office of Ocean Exploration and Research.

"The easiest way to describe what we do on a daily basis is we go to places in the world’s oceans that have never been explored — nobody knows what’s there," he said. "We’re going to these places for the first time."

NOAA’s recent discoveries have run the gamut, from an 85-mile-long coral reef off the coast of South Carolina to a shipwreck to 25 new marine species. NOAA officials say more ocean exploration could lead to new cancer drugs, along with new sources of economic development and new ways to promote trade, fisheries, tourism and energy exploration.

"We’ve only explored 5% of the ocean’s volume — think about that," Gallaudet said.

Gallaudet said the nation’s "blue economy" is expected to employ an estimated 40 million people by 2030, more than doubling its contribution to the overall U.S. economy.

With the program getting "a lot of attention and great support" from the White House, Gallaudet told NOAA’s Ocean Exploration Advisory Board last month that "it’s a lot of fun right now."

"It’s an exciting time, and I think the opportunities are vast," he said.

The EEZ dates back to 1983, when President Reagan designated the waters between 3 and 200 miles from the U.S. coast as territory where the nation controls the resources and economic activities.

"The nation is poised to harness cutting edge science, new technologies, and partnerships to unlock the potential of our oceans through increased ocean mapping," Trump said in the memorandum.

Trump, who also hosted a summit on ocean exploration in November, gave NOAA six months to develop a strategy for mapping near the shoreline of Alaska and the Alaskan Arctic, where he said information is "especially lacking."

The president also asked for recommendations on how to speed up the permitting and authorization process for ocean research and mapping, saying they frequently require multiple environmental reviews.

NOAA has a $42 million annual budget for its ocean exploration but relies on partners in both academia and the private sector to do much more. Much of the research is conducted on the NOAA ship Okeanos Explorer and the exploration vessel Nautilus, which is owned by the Ocean Exploration Trust.

Ocean discoveries "will soon be made by robots that operate 24 hours a day, seven days a week," said Robert Ballard, lead investigator of the institute, who also serves as president of the Ocean Exploration Trust and director of the Center for Ocean Exploration at the University of Rhode Island’s Graduate School of Oceanography.

"U.S. territorial waters cover more ocean than those of almost any other country on Earth — imagine we’re about to lead the next Lewis and Clark expedition, only six times over," he said. "When we’re done, we’ll know what we have."