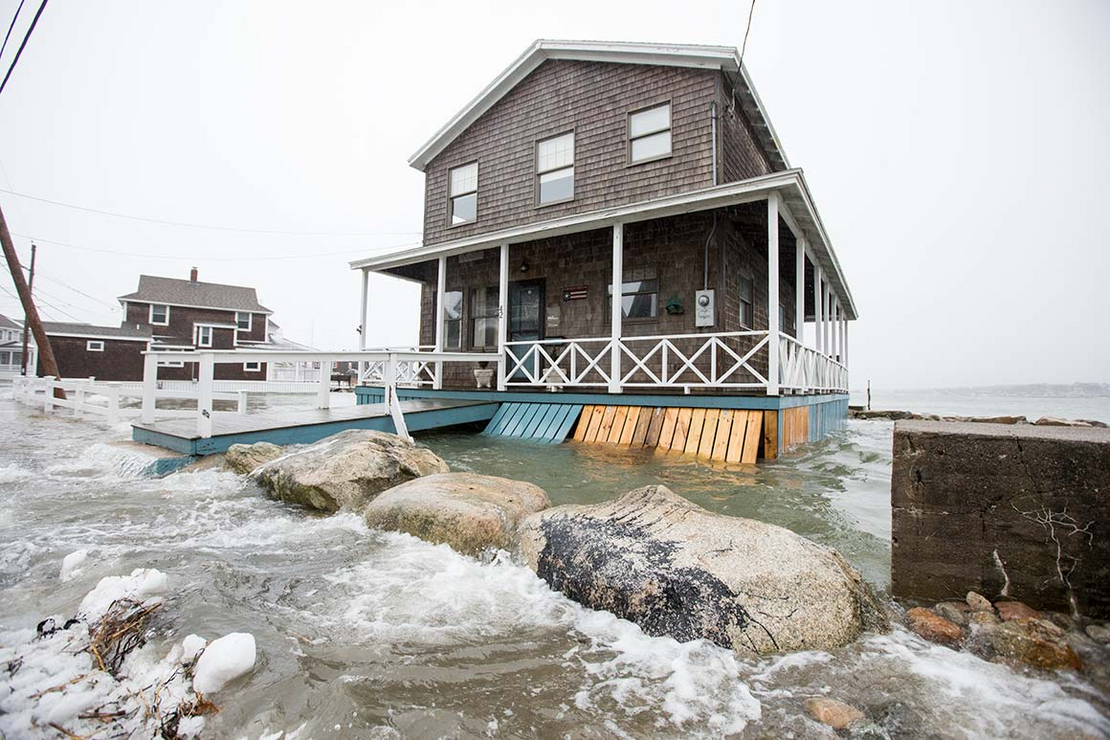 NOAA found that record-breaking high-tide flooding is expected to continue into next year. Minor flooding at high tide during a winter storm in Scituate, Mass., is shown here. Scott Eisen/Getty Images

Sea-level rise led to a record number of high-tide flooding days in areas like the southeastern Atlantic and eastern Gulf coasts — damaging surges that are expected to become commonplace along most of the nation’s coasts by 2030, NOAA said today.

Coastal communities saw twice as many high-tide or "sunny day" flooding days from May 2020 to April 2021 compared to two decades ago, according to NOAA’s "2021 State of High Tide Flooding and Annual Outlook," which tracks changes in flooding patterns from tide gauges along the nation’s coasts and provides flooding projections.

High-tide flooding occurs when tides reach anywhere from 1.75 to 2 feet above the daily average high tide and start spilling onto streets or bubbling up from storm drains, according to NOAA.

NOAA scientists in the report highlighted areas like Charleston, S.C., and Bay St. Louis-Waveland, Miss., that saw record-breaking stretches of “sunny day” flooding for 14 and 22 days, respectively. Those same locations would have typically experienced floods two to three days each 20 years ago, the agency said.

Today, more than 80% of NOAA’s tide gauge locations along the Atlantic and Gulf coasts are seeing an accelerating number of high-tide days, and federal scientists expect that number to grow.

By 2030, NOAA’s long-term projections show seven to 15 days per year of high-tide flooding for coastal communities nationally. And by 2050, the number rises to 25-75 days.

NOAA said the long-term outlooks are based on the range of relative sea-level rise, using two scenarios of the Fourth National Climate Assessment considered more likely to occur by 2030 and 2050.

William Sweet, an oceanographer at NOAA’s National Ocean Service, told reporters on a call today that the U.S. last year saw a national median of four high-tide flooding days, just shy of a record of five high-tide flooding days seen in 2015 and 2018. The national level was likely lower, in part, because the West Coast was responding to La Niña conditions that lower sea levels, according to NOAA.

But Sweet emphasized that 14 specific locations either met or exceeded historical records, and readings don’t always “follow the trend” in “nice, clean” lines but instead bounce around an upward curve.

Overall, Sweet said the underlying trend shows such flooding days are accelerating and may even be underestimated, pointing to sea-level rise as the main culprit.

Sweet also said sea levels are rising around the country because the ocean is rising in most locations, fueled by melting ice and thermal expansion of a warming ocean. Another factor, he said, is that land along the east and west coasts is sinking.

When asked why the Southeast is seeing a higher number of such flooding days, scientists on the call pointed to higher-than-anticipated amounts of heat in the coastal oceans and said sea levels are likely responding to that heat in the Gulf Coast region and southeastern U.S.

But they also said they’re trying to understand if the higher sea levels are a multiyear anomaly or if those conditions will persist going forward, as is expected in models that account for continued warming and increased ice melt.

Nicole LeBoeuf, NOAA’s assistant administrator, told House members at a budget hearing today that her home state of Texas had broken multiple records of 20 days of high-tide flooding this past year.

LeBoeuf said NOAA works closely with the Army Corps of Engineers to provide projections for sea-level rise and inundation risks and projections, as well as engineering using natural-based infrastructure to protect coastline and create habitat.

LeBeouf said a critical part of NOAA’s budget is receiving funds to ensure the agency’s water level sensors are in place, and high-performance computing to predict sea-level rise and storm surge risks.”

“For the first time in human history, we must plan infrastructure for conditions we’ve not yet seen,” she said. “We’ve never had to do that before and so it is essential that NOAA’s predictive capabilities and our observations be put to the task and work with other federal agencies to make sure our communities are safe and that our federal agencies are able to complete their missions with climate change in mind."