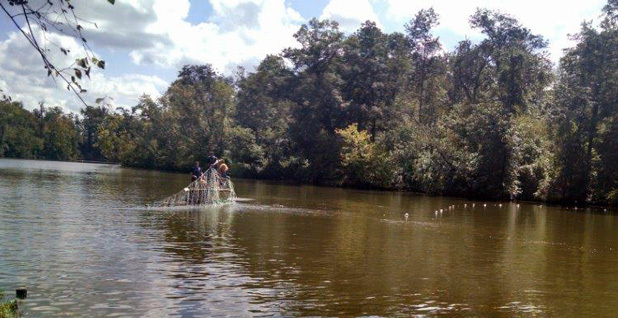 Researchers check a gillnet for spawning sturgeon in the Pamunkey River. Photo by Emily Yehle.

KING WILLIAM, Va. — The Atlantic sturgeon is a creature made for myth: It’s huge, bony and prehistoric, with four feelers that jut like a mustache from its large snout.

To the Pamunkey Indian Tribe, the fish offered sustenance and wisdom. Men would catch hundred-pound fish by the throat, or in traps made with cedar poles. Children are said to have ridden on their backs, as a lesson that the powerful can also be gentle.

"They got no teeth. They look like an old man’s jowls," Kirk Moore, the tribe’s keeper of traditions, said on a recent hot day at the edge of the Pamunkey River. "They’re really beautiful."

Moore, a 58-year-old sporting tattoos, a long braid and an ever-present cigarette, was keeping an eye on federal researchers who are counting the sturgeon that spawn in this tributary of the York River. Moore’s tribe has always known the sturgeon lurking on the bottom of the Pamunkey, but federal officials first became aware of the population in 2013.

Now the National Oceanic and Atmospheric Administration is working with the Navy to determine how many sturgeon remain in the Pamunkey, as part of efforts to protect the broader endangered Chesapeake Bay population. The results of the study will help fill in a thus-far cloudy picture of a species that has been around since dinosaurs walked the Earth.

Chris Hager, whose company Chesapeake Scientific is helping NOAA and the Navy conduct the research, can get almost poetic on the importance of keeping such unique populations around in a "rapidly changing" world. The continued existence of the 200-million-year-old sturgeon, he said, is "pretty doggone impressive."

Hager and other researchers say the sturgeon that breed in the Pamunkey fill their own niche. They may be genetically distinct, evolving there for millions of years.

Differences are already emerging. The population breeds in the fall, for example, rather than in the spring like other populations. And researchers have caught one Pamunkey female coming to the spawning grounds two years in a row, challenging the belief that females return only once every three to five years.

If researchers can estimate the size of its population — and, eventually, its breeding habits, range and threats — federal agencies can better protect it from extinction, Hager said.

"If you remove these fish from this place, there may never be fish that come back. Or it may take a very, very, very long time for them to come back and then be genetically selected to live in this place," Hager said.

"So this idea of maintaining biological diversity within a species and on the Earth in total, it gives us sustainability of the planet. It’s like a buffer."

Back home, sturgeon was so rare it was reserved for kings and queens — a law that exists even today. But in Jamestown, it was the cornerstone of everyone’s diet.

In 1609, Capt. John Smith described their abundance thusly: "We had more sturgeon than could be devoured by dog and man." The colony literally depended upon them. The "Starving Time" of 1609-10 has been partly blamed on the lack of the usual sturgeon run, perhaps because of a drought.

Today, the fish’s population is greatly diminished, earning it protection under the Endangered Species Act. But the fascination with the species persists.

"I hope we catch one because it looks like an elephant," Hager said on a recent outing on the Pamunkey. "It has these four feelers that are like their nose turned inside out that they smell along the bottom, you know, like mine sweeper, and he’s just looking for food."

On that day, Hager — and the reporters NOAA invited along — were out of luck. Researchers catch an average of only one or two sturgeon a day, with some days yielding none and others turning up more than 10.

Hager and other researchers described the excitement that comes with catching sturgeon that can reach 14 feet long and weigh 800 pounds. The fish is at first very still, giving researchers a short window in which to get it on a Navy stretcher originally designed to move injured sailors through a ship’s manholes. Strapped onto the stretcher, the sturgeon is safely kept in the water while researchers tag it and collect data.

If researchers are too slow, the fish comes to life, flipping over onto its stomach as it realizes, "Hey, I’m being abducted by aliens," Hager said. The fish’s bony scales can snag and scrape, leaving the researchers with an array of small injuries.

"It’s like being beat with a really large, spiky baseball bat," said Carter Watterson, a marine fisheries biologist with the Navy, later joking: "Our favorite one was the one that caught Chris upside the face with the tail."

Jason Kahn, a biologist with NOAA’s National Marine Fisheries Service, lost a toenail last year. He now wears closed-toed shoes and puts his life jacket on inside out, to ensure an unruly fish doesn’t snag the straps.

So far this year, researchers have caught 42 sturgeon, three of which were recaptures. They have a few weeks left in the spawning season, after which they hope to calculate a good estimate of the population’s total size.

Until then, Kahn and his colleagues will spend most of their days bringing up empty nets. This is the third season they have spent 10 weeks on the edge of a farm in Virginia, checking four large gill nets every hour from dawn until dusk.

Every so often, a lightning storm pops up, forcing them to move their cars out of the thicket of trees by the river’s shore and into neighboring corn and bean fields. Or a motorboat speeds around the corner, prompting them to wade into the water and wave around their arms lest the boat damage their nets.

But mostly they sit on camp chairs under a canopy, waving away at insects until it’s time to climb into a beat-up boat and try again. The nets stretch across the entire width of the Pamunkey, straddling underwater holes where sturgeon like to lay their eggs. Researchers estimate about 150 sturgeon come to the river every year to breed. The total population may be twice that.

Genetic tests show it to be the smallest "effective" population known on the East Coast. In other words, as few as nine fish may have started the Pamunkey River population.

But its impact could be huge: Sturgeon alter their environment, digging around in sediment for food like a farmer plows a field. And they are big, consuming a lot of food.

The Pamunkey fish are also just one of several populations of Atlantic sturgeon that were once prevalent throughout the Chesapeake Bay region.

Researchers had once thought them wiped out, after decades of high demand for their flesh and roe. But they were rediscovered in the mid-1990s, and the federal government added the Chesapeake Bay population to the Endangered Species Act list in 2012.

Studies — such as the one on the Pamunkey River — are part of an effort to help the fish repopulate. A river full of sturgeon is far different from one without them.

"It fills a large role in the ecosystem," Kahn said. "Having these species here and having them go back to their historic abundance is really important to the overall ecosystem."