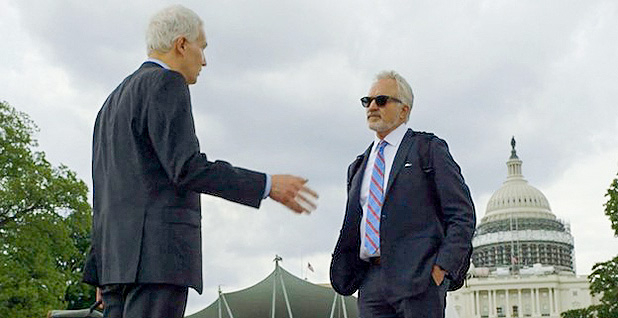 The small group of House Republicans who have pledged to work on climate change solutions will get a boost of TV star power tonight.

The National Geographic Channel’s latest episode of "Years of Living Dangerously" features the Citizens’ Climate Lobby (CCL), the group that encouraged House lawmakers to organize a caucus to tackle the issue. Membership of that Climate Solutions Caucus is split equally between Democrats and Republicans in what its leaders call the "Noah’s Ark approach" (E&E Daily, Feb. 9).

Rep. Carlos Curbelo, the Florida Republican who co-founded the caucus, and member Rep. Lee Zeldin (R-N.Y.) each make a cameo in a preview of the episode.

"It’s kind of a shame that in today’s politics, doing the right thing is considered courageous," Curbelo said in an interview that will air tonight.

Hosted by actor Bradley Whitford, who is famous for his role as White House deputy chief of staff on the NBC drama "The West Wing," the episode highlights the work of CCL senior congressional liaison Jay Butera, who has spent nearly a decade trying to bridge the partisan divide on climate.

"So are you just a glutton for punishment, or what?" Whitford asks Butera outside the Capitol.

In a recorded introduction to the episode, Whitford said it was "a real epiphany" to see CCL’s strategic, nonconfrontational approach in action.

Since the failure of the 2009 carbon-capping bill sponsored by former Rep. Henry Waxman (D-Calif.) and now-Sen. Ed Markey (D-Mass.), which cleared the House but never got a vote in the Senate, Congress has been stalled on climate legislation.

CCL advocates a revenue-neutral fee on carbon. It sees President-elect Donald Trump’s election as having the potential to energize members of Congress around its approach (E&E Daily, Nov. 14).

"If there’s ever a chance when citizens need to step up and take charge of what’s happening, speak to their government and have their voice be heard, it’s now," said CCL Executive Director Mark Reynolds.

There are now 360 CCL chapters around the globe, mostly in the United States. Tomorrow evening, many of them will host viewing parties to celebrate the episode that airs at 10 tonight.