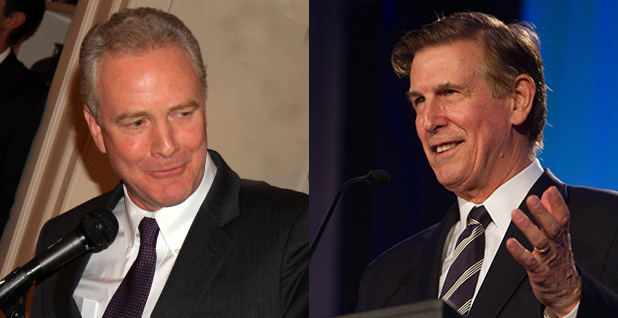 Not a single Republican member of the bipartisan House Climate Solutions Caucus has signed onto a "cap-and-dividend" bill introduced yesterday, according to co-sponsor Rep. Don Beyer (D-Va.).

A member of the House Natural Resources and Science, Space and Technology committees and avid climate hawk, Beyer told reporters he had spoken with the staffs of every GOP member of the "Noah’s Ark" caucus, whose stated mission is to find market-based solutions to address climate change.

"At the staff level, we talked to every single person," he said on a teleconference call to unveil his bill. "So far, no one has said yes."

A spokeswoman for Rep. Carlos Curbelo of Florida, the Republican co-chairman for caucus, said she doubted some Republican members were even aware of the legislation.

"When it comes to reducing carbon emissions, the more ideas we have on the table for members to debate and consider, the better. Regarding this specific bill, I doubt many Members are even aware of it, and others are working on their own concepts," Joanna Rodriguez wrote in an email to E&E News.

The bill, the "Healthy Climate and Family Security Act," sponsored by Beyer in the House and by Sen. Chris Van Hollen (D-Md.) in the Senate, would set CO2 emissions caps and auction carbon credits to the first sellers of coal, oil and natural gas into the U.S. market. The dividends would be returned to American taxpayers quarterly (Climatewire, Jan. 29).

Van Hollen and Beyer were joined on the teleconference by the Rev. Lennox Yearwood, president and CEO of the Hip Hop Caucus, and Mike Tidwell, director of the Chesapeake Climate Action Network.

Tidwell praised the measure, saying it is "simple, fair and built to last."

The legislation would use a declining cap to reduce carbon emissions to 80 percent below 2005 levels by 2050; return 100 percent of the proceeds to American taxpayers; auction carbon permits to the first sellers of oil, coal and natural gas; and include border adjustment protections to ensure U.S. companies are not disadvantaged when competing against foreign competitors.

Beyer said GOP members generally gave one of two explanations for turning down his co-sponsorship offer. The first was that they are not quite ready for it.

"They’ve come a long way, but not that far," he said, noting the Republican membership has grown exponentially since the caucus’s formation in 2016.

While the caucus managed to form a voting bloc to defend a climate provision in a defense spending bill last year, critics generally see the group as political cover for Republicans who are loath to act on global warming.

"He’s a vulnerable Republican facing credible climate-hawk challengers and thus desperate for political cover; he has a pulse; and he’s arguably human. He’ll fit in well with climate peacocks like Matt ‘Terminate the EPA’ Gaetz and Carlos ‘Drill the Arctic, Not Florida’ Curbelo."

The second reason Republicans turned him down, Beyer said, is they do not want a primary opponent financed by the fossil fuel industry. The fear is that fossil fuel backers will pump money into Republican candidates whom they see as sympathetic to oil, gas and coal.

Beyer said Republican offices he spoke with said they would vote for the bill but could not risk sponsorship at this time.

While the caucus has invited speakers to address the idea of pricing carbon, Curbelo said the members are not yet ready to propose policy solutions, but he hopes to offer some ideas this year.

Van Hollen acknowledged the lack of a GOP appetite to push through a carbon tax but said it’s important to lay the groundwork.

"We all recognize that given the anti-science position that President Trump has taken, given his remarks over the last couple days that demonstrate a total ignorance about climate … the president is not going to be embracing efforts to address climate change; that’s not the point," he said.

"The point is to build momentum," he said, "because if we don’t, when the opportunity arises we will not be prepared."

There are, however, a growing number of Republicans, conservatives and libertarians who openly support pricing carbon off Capitol Hill (E&E Daily, Nov. 1, 2017).

And the conservative Alliance for Market Solutions yesterday released a report, authored by Alex Brill of the American Enterprise Institute and Scott Ganz of the Georgia Institute of Technology, on the net impact of a revenue-neutral carbon tax in nearly all of the 3,000 counties in the United States.

The authors found the net impact of a carbon tax offset by a reduction in wage taxes would be modest across most counties.

"Some Republican lawmakers are reluctant to support a carbon tax because they fear their constituents will end up paying more for gasoline and electricity," Alex Flint, executive director of AMS, said in a statement. "This research suggests that these fears are misplaced."