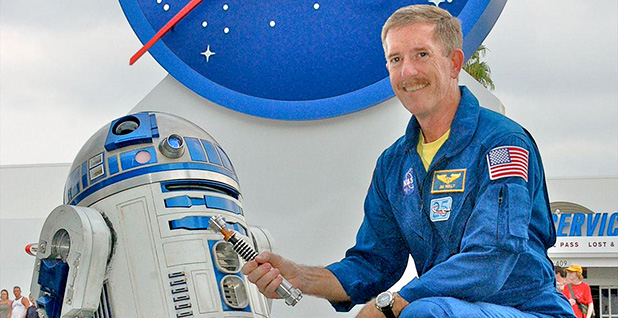 Former astronaut James Reilly II will relaunch his geology career from the top tomorrow when he faces senators at his confirmation hearing to serve as director of the U.S. Geological Survey.

A veteran of three NASA space shuttle missions, Reilly also spent years as a field geologist and earned a doctorate in the subject from the University of Texas, Dallas. His confirmation does not appear to face any serious turbulence, though the job he’s aiming for will surely test him.

"He is a straight-up guy," said Robert Stern, one of Reilly’s graduate school advisers, adding that "he was a quick study in the lab" (Greenwire, Jan. 30).

Reilly’s hearing before the Senate Energy and Natural Resources Committee will give him a chance to map out his vision for leading approximately 8,200 full-time USGS employees. It will also give lawmakers a chance to press the political novice on how he would defend an agency that sometimes feels unloved.

The Trump administration has proposed a $859.7 million budget for USGS in fiscal 2019, a 20 percent cut from the current level. The proposed budget anticipates full-time agency staffing falling 15 percent, to 7,040 workers.

Climate science, frequently a fraught topic for Trump administration nominees, comes in for an even bigger cut under the president’s proposal.

Funding for USGS’s national and regional climate adaptation science centers would shrink in half, while climate research and development funding would also fall to pay for what the budget calls "higher priorities" (Greenwire, Feb. 8).

"The USGS is finding solutions to the natural resource issues that impact local communities and our nation, and I’m excited to lead its future endeavors," Reilly said in a statement

Now 63, Reilly was born in Idaho and currently lives in Colorado. He earned three degrees in geosciences, with his 1995 doctoral dissertation titled "Geological Controls on the Distribution of Chemosynthetic Organisms in the Gulf of Mexico."

The organisms he studied rely on underwater oil and gas seeps, requiring him to spend 22 days in deep submergence vehicles. Earlier in his career, he took part in an expedition to Marie Byrd Land, West Antarctica, where the March temperatures hover about 20 degrees below zero.

All told, Reilly recounted that he spent some 17 years in the "oil and gas industry" before joining NASA in 1994. Flying aboard the shuttles Atlantis and Endeavor, Reilly amassed more than 853 hours in space and completed five spacewalks before his 2008 retirement from NASA.

"There really are billions and billions of stars, and you can see them," Reilly recalled in a 2014 interview with SpaceFlight Insider. "In fact, they’re so numerous it’s very difficult to pick out the constellations you and I can see from the ground."

He now provides "corporate training/team building" services through a Colorado Springs-based entity called Mach 25 Management. Clients have ranged from Lockheed Martin Corp. to the Property Casualty Insurers Association of America, according to his financial disclosure statement.