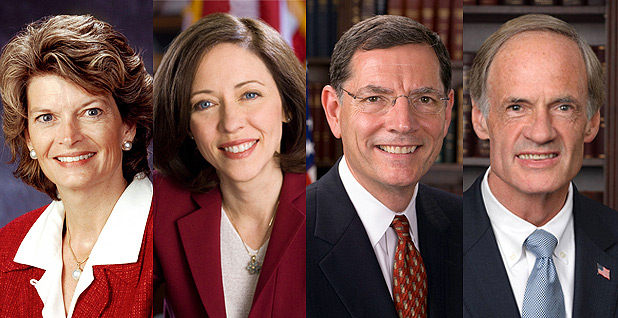 The daily skirmishing over President Trump’s Cabinet nominees this week has plunged the Senate into procedural trench warfare — all the way down to the committee level. But is it the new normal or just a temporary blip for a chamber that used to pride itself for being "the world’s most deliberative body"?

Tension in the Senate is nothing new — it ran high throughout the eight years of Barack Obama’s presidency, prompting former Majority Leader Harry Reid (D-Nev.) to invoke the "nuclear option" to confirm executive branch and judicial nominees by a simple majority. For now, though, Supreme Court nominees are still subject to the 60-vote threshold.

But with Democrats now boycotting nomination votes in committee on almost a daily basis, even the chamber’s president pro tempore, Orrin Hatch (R-Utah), blew his top earlier this week after minority members on the Finance Committee he leads skipped votes on Steve Mnuchin and Rep. Tom Price (R-Ga.), Trump’s nominees to lead the Treasury and Health and Human Services departments, respectively.

"I think they ought to stop posturing and acting like idiots," the normally genteel Hatch told reporters after Tuesday’s vote was scrapped. "I’m really tired of this type of crap."

Tuesday’s postponement was the second time in two days that Democrats had delayed the votes; on Monday, Democrats invoked a Senate rule that limits committees for meeting two hours after it convenes to force a delay. Hatch yesterday suspended the committee rules and allowed both nominees to advance without any Democrats present.

"We’ve never had this problem before, and I didn’t think we should let it last," Hatch told reporters yesterday.

Finance Committee ranking member Ron Wyden (D-Ore.) pointed to a string of bipartisan efforts he’s worked on over the years yesterday and said he would "always try to find bipartisan common ground."

But he was clearly irked by Hatch’s decision to move ahead with only Republicans present.

"There was a rump group that met in violation of democratic principles in order to advance the interests of two ethically flawed nominees," he told reporters. "Now people have asked what happens from here. I’m going to do everything I can to get the facts before there’s a vote on the floor."

The Senate Environment and Public Works Committee may be heading down the same path this morning, when the panel regroups to try to advance to the floor the nomination of Oklahoma Attorney General Scott Pruitt (R) to be U.S. EPA administrator. Democrats boycotted the meeting over what they say was Pruitt’s failure to fully respond to the more than 1,000 questions they asked him (Greenwire, Feb. 1).

New EPW Chairman John Barrasso (R-Wyo.) yesterday repeatedly declined to address whether he plans to suspend or change committee rules to move Pruitt, but he has also said that he thinks the nominee has responded adequately to Democrats’ demands.

The flap — while reminiscent of similar partisan disputes over nominees and climate change legislation in recent years — is clouding committee dynamics just as its new leaders take the reins.

Sen. Tom Carper (D-Del.), who replaced the more liberal firebrand Barbara Boxer (D-Calif.) as ranking member this year, said yesterday that he and Barrasso "are actually pretty good friends" who have an "honest disagreement" over Pruitt’s responsiveness to Democrats.

"I don’t know how you can say that someone has responded fully when thousands of emails that we’ve asked to take a look at, that we think are very much germane, to the work that he would do as EPA administrator, are being denied to us," he said in an interview yesterday. "And getting in line behind people who have been waiting for years for access to those emails, that’s outrageous."

Still, he downplayed the notion that the dispute would sour relations on the committee, which has a long tradition of bipartisan cooperation on infrastructure issues, although members are often at one another’s throats on the environmental side of its jurisdiction.

"We’re friends, and it’s like a marriage, you know?" Carper said. "Sometimes spouses don’t always get along. And what’s the key to a long marriage? Communicate, compromise, collaborate. And that’s the secret to getting things done here."

Sen. Jim Inhofe (R-Okla.), who spent years sparring with Boxer atop the EPW panel before GOP term limits forced him to step aside as chairman this year, said fights over nominees come with the terrain.

"I think they’re both kind of like Barbara Boxer and I was, in that we can still be on a friendly basis, and I anticipate that they would do the same thing," he said yesterday of Barrasso and Carper.

Still, he called "wrong" Democrats’ boycott of the Pruitt vote. "They know full well that ultimately he is going to be confirmed," he said.

Reminded that Republicans delayed Gina McCarthy’s nomination to be EPA administrator in 2013, Inhofe said it was "totally different" because Obama’s EPA had already been operating under his nominees for years.

He added that the delay on McCarthy’s vote was prompted by then-top Republican on the panel David Vitter of Louisiana, who was seeking an answer to a single question. "We had 1,078 questions in" on Pruitt, Inhofe added.

Senate Majority Whip John Cornyn (R-Texas), who yesterday sparred with Sen. Al Franken (D-Minn.) during the vote on Sen. Jeff Sessions’ (R-Ala.) nomination to be attorney general, heaped blame on Democrats for disrupting the day-to-day work of the Senate with "their foolish tactics like boycotting hearings and filibustering the noms and slow-walking them."

"There’s obviously still a lot of hard feelings as a result of the election, and we’re going to have to work our way through that before we can get back to work," he told E&E News. "And that’s unfortunate but that’s where we are."

Franken "crossed a line" by criticizing Sen. Ted Cruz (R-Texas), who wasn’t present, Cornyn said, adding that it wouldn’t have lasting repercussions on his relationship with the Democrat. "Everybody’s adults."

ENR ‘on the right foot’

The Senate Energy and Natural Resources Committee was largely spared the nominee tussling, although votes on Rep. Ryan Zinke (R-Mont.) to be Interior secretary and former Texas Gov. Rick Perry to be Energy secretary were delayed for one week after ranking member Maria Cantwell (D-Wash.) raised objections to Perry’s response to the panel, scuttling a markup that had already been noticed.

Cantwell yesterday said the tone of the relationship between herself and Energy Chairwoman Lisa Murkowski (R-Alaska) was cemented at the outset of the last Congress, when the chamber debated multiple contentious amendments to a bill that would have approved the Keystone XL pipeline.

"I think she and I always try to get down to the brass tacks on policy and showed two years ago that we could just agree to disagree and have a productive debate, and I’m sure we’ll continue that on many policies," she said yesterday.

Murkowski, who announced yesterday that she would oppose Trump’s controversial Education secretary nominee, Betsy DeVos, told E&E News that she delayed the Zinke and Perry votes out of a desire to start off "on the right foot."

"You saw how that played out," she said. "We were the one committee yesterday that moved through two nominees with no fireworks, no boycotts and a bipartisan vote, and I felt pretty darn proud of what we did."

Tough circumstances are part of the Senate landscape, Murkowski added.

"You have days where you have stuff going on, swirling around you and it makes things more interesting and challenging, but you got to get through it because the next day it’s going to be something else," she said.