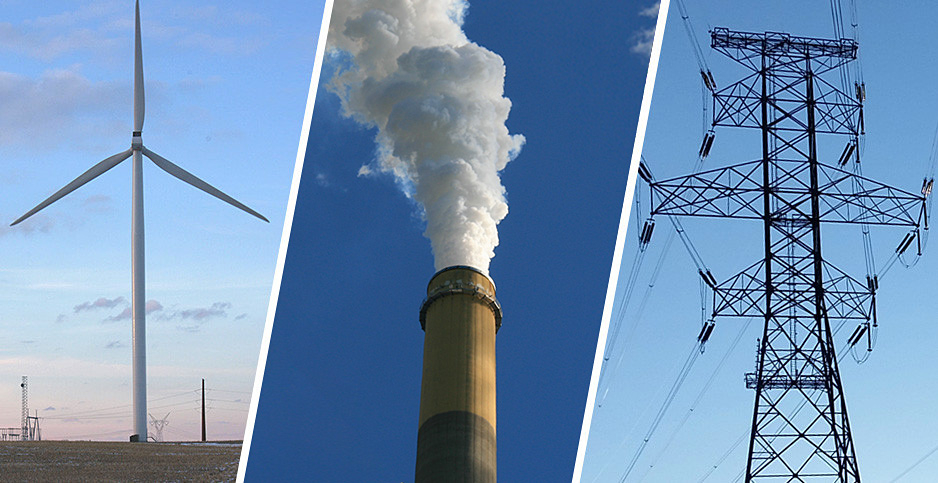 With no fossil fuel production and broad interest among the states in advancing clean energy, New England could be a case study on how to develop a multistate carbon-free power market, observers say.

And yet the Northeast is rife with competing interests — from progressive state leaders to power producers to grid planners charged with keeping the lights on — that are complicating the energy transition in an area reliant on natural gas. The outcome of how the grid operator navigates those viewpoints — and how quickly it does — could make or break whether New England remains a leader in weaning itself off fossil fuels and reducing emissions.

States in New England have long been frustrated by what they describe as a mismatch between their own clean energy goals and the rules set by ISO New England, which oversees the six-state power grid with the primary goal of electric reliability. Five New England states have established goals to achieve 100 percent clean power, and several have ambitious plans to scale up electric vehicles and electric heating systems. Rules within the wholesale power market, which covers Connecticut, Maine, Massachusetts, New Hampshire, Rhode Island and Vermont, have sometimes worked against those targets, including by favoring natural gas and overestimating the cost of renewables, according to observers.

Now, ISO New England plans to alter a policy seen as an impediment to renewable energy, known as the minimum offer price rule. It’s also studying whether the larger electric market framework needs to change to attract more carbon-free energy and connect planned new offshore wind farms and other projects to the power grid, spurred in part by state pressure.

“The states have ramped up their engagement and shown a commitment to working together with the ISO to address these big issues they see as standing in the way of their goals of decarbonization and maintaining reliable, affordable electricity for their residents,” said Caitlin Marquis, policy director of Advanced Energy Economy, a clean energy trade group.

Although the state of play in New England is distinct, regulations within regional transmission organizations (RTOs) and independent system operators (ISOs) are in the spotlight nationally as well. Members of the Federal Energy Regulatory Commission, including Chair Richard Glick, have said that market reforms within RTOs and ISOs may be necessary to help grid operators plan for an unprecedented demand in renewable energy resources.

While coal currently supplies less than 1 percent of New England’s electricity, the region has a way to go to reach its targets. Currently about 52 percent of its electricity comes from natural gas, most of which is imported through a limited pipeline system.

In addition to having climate impacts, New England’s reliance on natural gas imports has contributed to high power prices in the region, a situation that may only worsen this year. In a report last month, FERC warned that industrial and commercial users in New England could experience electric and heating outages because of a global natural gas crunch, and there’s a possibility for “very high” power prices across the board.

But Northeast energy producers also are wary of broad and fast changes to the electric system, which they say could jeopardize reliability if they aren’t done carefully. And the specific reforms that could be pursued by the grid operator — such as the implementation of a carbon price — remain a matter of intense debate.

“It’s a real big knot,” said Barbara Kates-Garnick, a professor of practice at the Fletcher School of Law and Diplomacy at Tufts University. “The states aspire to green generation. We’re not there yet. We don’t have batteries the way we need batteries.

"So now we’re in the moment where we’re very dependent on fossil fuels, and the price is going up right now.”

Multiple factors have sparked the shift for ISO New England.

Under the leadership of Glick, the commission has called on the nation’s RTOs and ISOs to eliminate a set of policies that expanded so-called minimum offer price rules (MOPR) within organized power markets. Established at FERC’s directive in 2019 when former Commissioner Neil Chatterjee chaired the agency, the policies — which have existed in PJM Interconnection LLC and the New York Independent System Operator, in addition to ISO New England — were purportedly meant to ensure that electricity prices remained competitive in the face of state subsidies for renewables.

Now that FERC wants to reform the MOPRs, ISO New England is working to change its policy, having shared its initial plans earlier this year. It aims to send a final proposal to FERC for approval early next year.

Under the existing MOPR framework in New England, state-subsidized resources are subject to a “floor price” when they participate in capacity auctions, which are held periodically to ensure there’s enough power to meet peak demand across the system. The floor price provides a stopgap to prevent carbon-free resources that are subsidized by states’ policies from suppressing capacity prices, according to supporters of the expanded MOPR. Critics, however, say the current framework makes it more difficult and expensive for New England states to build clean energy resources.

Power generators have proposed a “transition” period to gradually incorporate state-supported resources in the market, while environmental groups want to completely and quickly get rid of MOPR.

ISO New England’s draft plan aims to strike a middle ground. While the grid operator’s working proposal eliminates the automatic price floor for subsidized resources, a similar calculation should still “be applied in certain situations,” ISO New England explained in a presentation to stakeholders in September.

“In June, when we launched the effort to remove the MOPR from the capacity market, we made clear that we will do so in a way that doesn’t jeopardize either power system reliability or competitive pricing in the capacity market,” Matt Kakley, senior communications specialist at ISO New England, said in an email.

But Casey Roberts, a senior attorney with the Sierra Club’s environmental law program, said it’s unclear whether the grid operator’s efforts to safeguard the market when MOPR is eliminated are necessary, and she says she’s worried about unintended consequences for clean energy projects.

Notably, a proposal from PJM — which oversees the power grid in 13 states and the District of Columbia — to change its own expanded MOPR policy did not include the additional aspects eyed by ISO New England, Roberts said. PJM’s plan went into effect last month.

“We have concerns about whether it’s really needed, or just a political handout to those who rely heavily on the capacity market, which is largely fossil fuels,” Roberts said.

If the MOPR policy is eliminated, ISO New England should develop additional measures to ensure that longstanding fossil fuel plants, nuclear generators and other reliable power sources don’t retire prematurely, said Dan Dolan, president of the New England Power Generators Association. Sources of dispatchable generation, such as natural gas power plants that generally operate 24/7, will be critical for keeping the lights on as more intermittent renewables are added to the system, Dolan said.

“We haven’t been appropriately valuing the reliability services on the system,” he said. “There must be an urgency to address those broader market issues that have existed for a long time, but could get a lot worse without the MOPR in place.”

‘They’re going to need to push’

Tensions among states, the grid operator and other players have existed for years in the Northeast, and they are not necessarily unique to the region, said Kates-Garnick of Tufts, who is also a former Massachusetts utility regulator and a former utility executive.

But the threat of climate change and uncertainty around federal climate policies is fueling a new urgency for more proactive planning and collaboration, Kates-Garnick said.

“The people at the ISO are very skilled. They understand how the grid operates,” she said. “They’ve been slow, at least in the New England ISO, in incorporating renewables. I think now, they’re beginning to recognize that they’re going to need to push.”

Indeed, some states and clean energy advocates calling for changes within ISO New England say they are frustrated with the pace of change.

Last year, the New England States Committee on Electricity, which represents the six Northeast states in regional electric issues, released a vision statement requesting changes in the governance structure of the ISO. It also called for a “new, regionally based market framework” that accounts for clean energy laws and asked the ISO to develop an electric transmission plan to support decarbonization.

“As a region, we cannot effectively plan for integrating clean energy resources and decarbonization of the electricity system required by certain states’ laws without having a clear understanding of the investments needed in regional transmission infrastructure,” the states said in their October 2020 vision statement.

In response, the grid operator is working on a series of studies, dubbed the “Future Grid Initiative,” looking at ways to reform the market to better support clean energy. A report on these findings will be released next year, said Kakley of ISO New England.

The goal of the Future Grid Initiative is to “determine exactly where the region’s power system is headed, how we’ll get there, and how to make sure New Englanders have access to reliable electricity during the transition,” ISO New England President and CEO Gordon van Welie wrote last month in an op-ed. The initiative considers three major market reforms: the development of a “forward clean energy market” specifically for carbon-free energy resources, the incorporation of carbon pricing into the capacity market, and a hybrid plan that combines elements of the first two concepts.

Any of those options would represent a significant shift for the New England electricity market, which currently does not "see any distinct value from clean energy resources,” said Kevin Huyler, director of federal regulatory affairs at National Grid. That has made clean energy projects generally costlier for consumers, Huyler said.

While National Grid and most of the states seem to prefer the forward clean energy market framework, power generators and ISO New England itself support the carbon pricing model. States might have more flexibility in advancing specific energy resources under the former structure, whereas the latter would be relatively neutral in terms of fuels.

“For many years now, we have strongly supported putting what we call a meaningful price on carbon,” said Dolan of the New England Power Generators Association. “The biggest challenge, candidly, has been the states, where they have consistently voiced their concern and opposition with moving down that path and instead have continued their regimes of wanting to pick and choose specific technologies and projects and lock them into 20- and 30-year contracts.”

In concurrence with the Future Grid Initiative, ISO New England is conducting a 50-year transmission planning analysis, also in response to the states’ demands. Whereas the ISO has typically planned transmission based on reliability factors and over a 10-year timeframe, the 50-year study will assess the costs of multiple transmission scenarios that would help states incorporate renewable energy, rooftop solar and other clean resources into the grid by 2050.

Overall, all of the ISO’s new initiatives are encouraging, but they’re only the beginning of what needs to change, said Phelps Turner, a senior attorney for the Conservation Law Foundation in Maine.