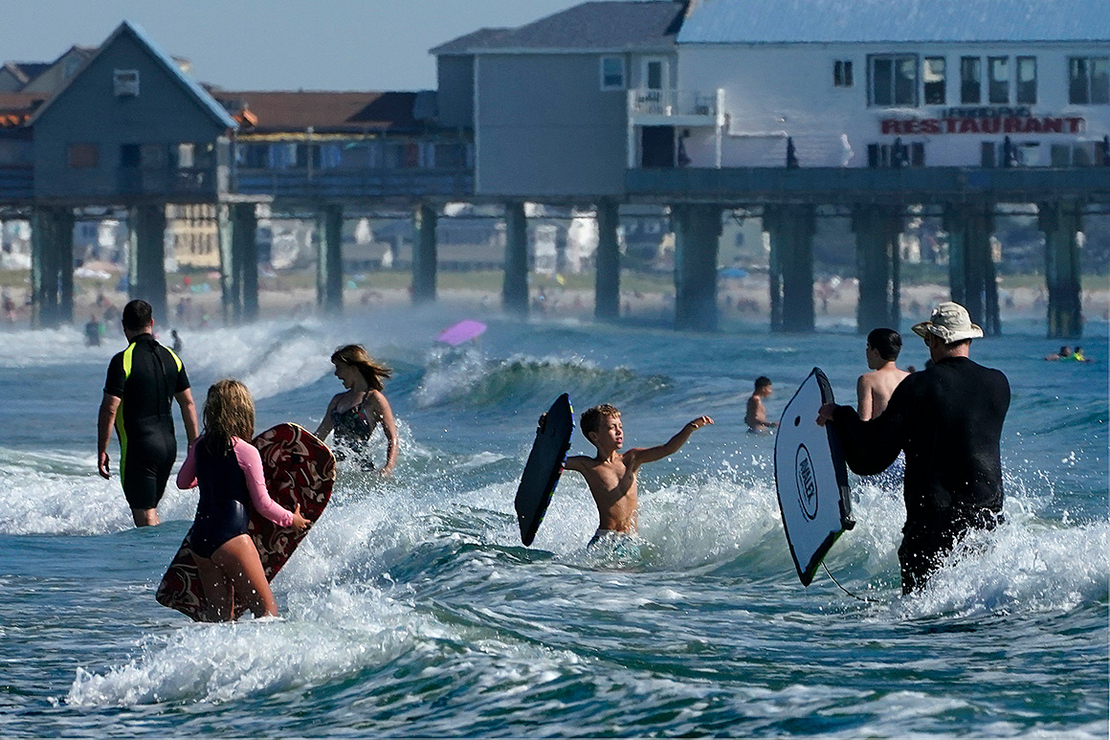 Beachgoers playing in the surf at Old Orchard Beach, Maine. The northeast coast of the United States is one of the fastest-warming regions in North America. AP Photo/Robert F. Bukaty

Summers on the northeast coast of the United States have heated up by 2 degrees Celsius over the past 100 years — making it the fastest-warming region in North America — and new research points to two likely explanations.

Climatologists suspect it has something to do with the slowdown of a powerful system in Atlantic Ocean as well as changing air circulation patterns, according to a findings published yesterday in Nature Climate Change.

The warming from Maine to Delaware has been “exceptional,” said Ambarish Karmalkar, the study’s lead author and a professor at the University of Massachusetts, Amherst.

The oceanic influence comes from the Atlantic Meridional Overturning Circulation (AMOC). That system has historically brought water from the tropics to the north, where it cools and is then returned south via deep water currents. But this “conveyor belt” aquatic system, as Karmalkar described it, is slowing down due to climate change.

The slumping conveyor belt is causing the ocean to get hotter off of the northeast coast, which generates temperature spikes in ocean air in the Mid-Atlantic Bight and Gulf of Maine regions.

“When this circulation slows down, that excess heat can accumulate and warm the coast of the eastern U.S.,” Karmalkar said. “Scientists have seen a dramatic increase in temperature because of the slowdown.”

But ocean warming is much slower than land warming, he said, so the AMOC phenomenon only describes part of what’s causing heating in the Northeast.

The North Atlantic Oscillation (NAO), an irregular weather fluctuation that determines the strength and position of winds that blow from the United States and over the Atlantic to Europe, also is fanning the flames on the region’s warming.

When the NAO does a positive oscillation, Karmalkar explained, it brings ocean air to land. Since the 1970s, the NAO has consistently been positive, bringing all the warmer ocean air from the slower AMOC to land, accelerating land heating trends.

“That combination has magnified the [warming] trends upwards,” he added. “Some of the biggest population centers in the U.S. are suffering the greatest degree of warming, and this warming is being driven both by equally rapid trends in the Atlantic Ocean and by changes in atmospheric circulation patterns.”

The rate of summer warming is especially important, said Karmalkar. Not only is heat an issue off the coasts, but humidity is increasing, as well, which can accelerate overheating health conditions.

“In terms of ecosystems and conservation, we have to look on the Gulf of Maine, where there are a lot of fisheries, for example,” he said. “We have to start to question if we’ll adapt to these changes.”

Although both winters and summers seem to be warming, Karmalkar said researchers still don’t know how the ocean and atmospheric phenomenon will differ between seasons. They also aren’t certain how the warming trends will look in the future.

“In this study, we focused on characterizing historical warming … like why it’s happening and digging into it more,” he added. “Our research implies that without improved high-resolution data, regional climate assessments, which inform our ability to plan for the future, may underemphasize warming in this populous region.”