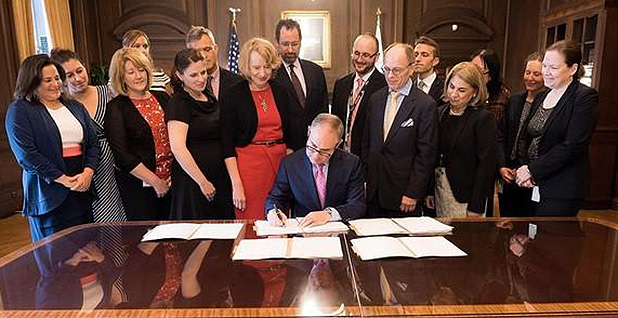 The top political official at U.S. EPA’s chemical safety program, who hasn’t been required to sign President Trump’s ethics pledge, has nevertheless promised to keep her distance from her former employer, the powerful American Chemistry Council.

Nancy Beck, the deputy assistant administrator at the Office of Chemical Safety and Pollution Prevention, has filed a recusal statement with the agency. In the statement, dated June 9, which was obtained by E&E News, Beck acknowledged that she is subject to conflict-of-interest laws pertaining to executive branch employees.

"I have understood that I have a ‘covered relationship’ with my former employer, the American Chemistry Council (ACC), and have recused myself from participating personally and substantially in any particular matter involving specific parties in which ACC is a party or represents a party," Beck said.

Beck said she understood that she cannot participate in "any specific party matter" involving the chemical industry trade group during her cooling-off period, which ends on April 21, 2018.

But Beck has been advised by EPA’s ethics staff that she can participate in "particular matters of general applicability," like rulemaking, even if the chemicals trade group has an interest in the proceeding. In addition, she can attend meetings where ACC is present or represented as long as the meeting is about "a matter of general applicability."

Beck also doesn’t have to sign Trump’s ethics pledge, given how she was hired by EPA. Brought in by Administrator Scott Pruitt without specific White House consent, Beck is not considered a political appointee as defined by the executive order that laid out the ethics standards, which are intended to limit appointees’ interactions with their former employers.

"Because I am in an Administratively Determined position, I have been advised by the Office of General Counsel/Ethics (OGC/Ethics) that I am not subject to Executive Order 13770 and therefore not required to sign the Trump ethics pledge," said Beck in her recusal statement.

In a separate memo sent to Beck and also obtained by E&E News, acting EPA General Counsel Kevin Minoli told the chemicals official that she would have to seek permission from him if she wants to participate in "any specific party matter" involving ACC.

"From one year from the time you resigned from ACC, absent an impartiality determination from me, you cannot participate in any specific party matter in which ACC is a party or represents a party if that matter is likely to have a direct and predictable financial effect upon the ACC or if the circumstances would cause a reasonable person with knowledge of the relevant facts to question your impartiality," Minoli said in the memo, dated June 8.

In addition, Minoli warned Beck to avoid meetings and discussions that center on ACC actions.

"While you can ethically work on rulemaking in general, you have been advised — and understand — that you cannot participate in any meetings, discussions or decisions that relate to any individual ACC comment nor attend any meeting at which ACC is present," Minoli said.

When asked about Beck’s ethics documents, the EPA said agency staff are committed to be fair in their service.

"We take our ethics responsibilities seriously; all political staff have had an ethics briefing and know their obligations. Each of us has committed to serve in a fair and professional way," said EPA spokeswoman Liz Bowman.

Beck is set to take an even bigger role at the chemical safety office later this month when the acting boss, Wendy Cleland-Hamnett, plans to retire (Greenwire, July 14).

Public health and government watchdog groups said the ethics documents, which haven’t been previously reported, would do little to prevent Beck from doing the bidding of her former employer.

"The [nongovernmental organization] community is very concerned about Nancy Beck’s serious conflicts of interest and noncompliance with ethical requirements," said Bob Sussman, counsel for Safer Chemicals, Healthy Families and a former top EPA official in the Obama and Clinton administrations. "We believe the public interest in protection from unsafe chemicals will be poorly served if a leading advocate for the chemical industry is allowed to be the decision-maker on the very issues on which she lobbied the agency."

Sussman’s public health group earlier this year sent a letter asking Pruitt for a list of EPA-related matters Beck handled at ACC and urging the agency to make public any steps taken to ensure that "EPA’s science and policy decisions affecting chemicals will remain unbiased and free from improper industry influence" (Greenwire, May 10).

Scott Amey, general counsel of the Project on Government Oversight, questioned the judgment of the EPA ethics officials.

"I think the agency made a mistake and at worst should have expended restrictions to all ACC member companies and at best left the one-year cooling-off period," he said. "I doubt that someone from that industry will be impartial and that the interest of the government outweighs the conflict of interest."

Amey added that "unfortunately, this is what happens when you take the opposite approach to draining the swamp and instead fill it with people from the industry that they are assigned to regulate."