Not everybody in the oil patch fears the robots 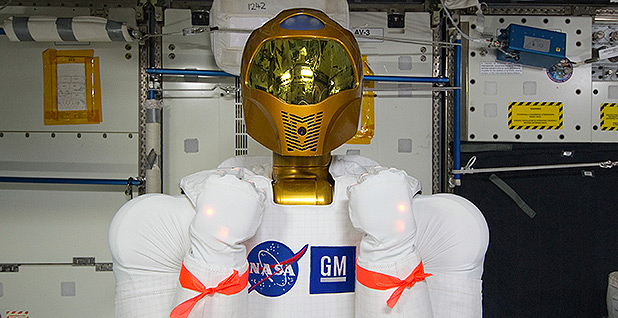 Using sophisticated multimedia presentations, California’s tech workers walked the Texas oil-field hands through geospatial data management, processing and analysis. New smart apps are available, they showed, to enable real-time communication and data sharing between field operations staff, maintenance workers on location and company dispatchers in Houston or beyond. Using digital tablets, automation will allow one worker to keep an eye on dozens of wells at a time, some promised, while routine visual inspections can be done by drones or other technologies, other Esri employees explained.

The transition to a digital oil field has been long discussed but is late in actual arrival. However, the oil and gas industry appears to be finally embracing automation, robotics, digital technologies and even quasi-artificial intelligence applications, experts say, as oil companies race to stay profitable at $50-per-barrel crude. Industry insiders say this steady push toward labor-saving technologies is happening not to destroy oil and gas jobs but rather to retain and create them.

This burgeoning enthusiasm for technology runs counter to the rising fear of robots and automation in the United States now popularized in mass media and even in academia.

Authors warn darkly of millions of jobs to be lost to technology. Yet oil and gas industry consultants warn instead that the sector faces severe future workforce shortages. They say technology will be necessary not only to fill the gap but to recruit and train the next generation of oil and gas workers replacing retiring veterans with decades of experience.

Robotics "would be a big job creator here," said David Brower, president of Houston-based Astro Technology Inc. "We have a really high vision of seeing high tech integrated into the oil and gas world."

Brower is collaborating with engineers to design and build a robot to be used for inspecting offshore pipelines and subsea equipment. The idea is to have the robot at the bottom of the ocean more or less permanently, saving oil companies the millions of dollars they would otherwise spend on mobilizing a ship with a crew to deploy a remote operated vehicle. ROV operators may be pushed out, he admits, but jobs would be gained in manufacturing and maintenance of these machines.

"We think the robots will live underwater for, like, four to six months and then will come up for maintenance and then go back down, but our goal is to make these things low cost enough that they’ll almost be like throwing away a laptop computer," Brower explained during an interview at his office.

For Esri, encouraging broader use of GIS technology in the industry through its ArcGIS platform enhances per-worker productivity, lowering costs for companies. Oil and gas is expanding its use of GIS technology to such an extent that next fall, Texas A&M University plans to launch an online Master of Science program in GIS technology specifically for the oil and gas workforce. It took some time for the university to come around, but it’s catching up quickly, said Texas A&M geography professor Andrew Klein.

"A lot of their data has a spatial attribute, right?" Klein explained at the sidelines of the recent industry GIS conference. "So location is very important in an industry like oil and gas because your well is somewhere, your assets are in another place, and if you’re dealing with spatial data, you are going to have to use GIS or some other geospatial technology to handle that work."

Michael Train, executive president of Emerson Automation Solutions, thinks future oil field work will be less analog, more digital. His business suffered from the oil price crash, as did the oil companies. But with rigs returning to the oil patch, so are his clients. They are demanding cost-saving solutions, so Emerson is offering technologies that make new and existing workers capable of doing more with less, raising their productivity.

"We have folks in pickup trucks driving around and doing things in some cases the very old-fashioned way, and I think now it’s OK to have a little bit of instrumentation, a little bit of automation," Train said. "It’s not going to be wrenches. It’s going to be iPads or tablets."

Oil booms are followed by busts, and post-bust adjustments see activity levels recovering, but generally with a smaller workforce. Experts say many laid-off oil workers will refuse to come back to the industry, scared off by the boom-bust cycle.

Recruiting new workers also poses challenges as the industry is faced with a younger generation with different expectations. A recent report by workforce analysts at Accenture warns that 2 percent of college graduates view oil and gas as a viable employment option.

Even during the shale oil boom, companies became adept at drilling more wells in less time and producing larger volumes of crude with smaller crews. Enhanced operational efficiencies and the application of more sand, water and horizontal wells are all combining to help U.S. shale oil come roaring back to life, even with oil prices at half what they were during the boom times. Even though payrolls are now rising, industry watchers agree that total employment will not return to the level it was at during the shale oil boom (Energywire, April 13).

Next comes technology. And technology proponents insist it will prove, in the long run, to be a net jobs creator, not destroyer, keeping U.S. shale oil and gas competitive against cheaper locales.

Robert Atkinson, president of the Information Technology and Innovation Foundation (ITIF), addresses the widespread fear of robots and automation now common in the United States in a recent article published in National Review.

He attributes the growing trend of blaming technology for job losses to pundits’ desire to absolve globalization and trade for the decimation of the U.S. manufacturing workforce over the past two decades, "never mind that foreign mercantilist trade practices, not computers, were responsible for more than half the manufacturing jobs lost in the 2000s."

"That is why, over the last century, there has always been a negative, not positive, relationship between productivity growth and unemployment rates," Atkinson says, using as an analogy typewriters and their transformation of office work. "In other words, higher productivity meant lower unemployment as it spurred more spending and more rational exuberance. The future will be no different, unless we smash the machines."

Atkinson’s argument is closer to attitudes found in other developed-world manufacturing powerhouses, like Japan. There, public opinion has not turned against technology as companies’ investments in robots and software have enabled Japan to retain much more manufacturing work as a percentage of its workforce: roughly 15 percent compared with 8 percent or less in the United States. Japan is now a leading exporter of industrial robotics.

At the 2017 CERAWeek by IHS Markit, a popular energy industry forum, Siemens AG President and CEO Joe Kaeser provided the view from Germany during a discussion on the "promise and peril" of technology. He argued in favor of promise and pleaded with oil and gas executives in attendance to embrace technology, not fear it. Siemens is gearing up to preach the virtues of automation in oil and gas again at the forthcoming Offshore Technology Conference in Houston. The company is planning "Digital Dialogues," according to a spokesperson, where officials will discuss Siemens’ offerings ranging "from automated process analysis to seamless data integration, remote monitoring, preemptive maintenance, and simulated training."

Train at Emerson is advising his oil and gas customers to "open themselves for change" as new technologies come to the fore. He isn’t alone.

"We’re really thinking about automation requirements in parallel with the electrical infrastructure," Bennett explained, "effectively taking all of those devices and allowing them to communicate with a centralized decisionmaking platform."

Bennett’s company is also talking up its virtual reality technology and how it can be employed to train new and existing workers or to even walk field hands through a specific maintenance program, logging and uploading the work instantaneously to company databases back at the office.

Schneider Electric also sees a labor crunch ahead for oil and gas. Bennett said his company is working on technologies to address the issue and keep companies humming with fewer workers and at $50-per-barrel crude.

"As you take all those interconnected devices and you start to not just think about automation but then extrapolation with that price, then you can make better asset decisions," he said. "One outcome is that you need less human interaction when you’re running that facility."

For Emerson, other solutions include multiphase meters common overseas but slower to catch on in the United States, said Laura Schafer, an upstream oil and gas marketing director at the company. The technology allows field workers to manage more facilities simultaneously, she explained.

"Certainly as we automate more, we enable one person to cover more wells," Schafer said. "Instead of covering 20 wells for one, get that up to 40, and the only way you can do that is with more instrumentation and more information right to the hand."

Schafer also insists that embracing high-tech solutions is critical to recruiting new workers, especially from a population that has grown up with tablets, smartphones and other internet-connected devices.

A former offshore platform worker herself, Schafer explained the drudgery of being stuck out to sea for six-week stints, away from family and friends. It’s a tough sell to skilled college graduates who have other options, she argued, so Emerson is nudging companies toward testing technologies to limit the need for humans to serve such long stretches offshore.

"We’re just now starting to see customers start to test that sort of technology, because some have shared that it’s going to save them 40 or 50 percent on some of the capex of their facilities," she said.

In a new study by Accenture Strategy, analysts urge oil and gas companies to look for ways to use advanced technologies not only to address future staffing shortages but to make the work more appealing for the next generation. Factoring in baby boomer retirements, the blowback from mass layoffs during the most recent oil price bust and emerging industries, authors of the report predict a shortage of 12,500 to 25,000 "petrotechnical professionals" by 2025. The analysts think the industry needs up to 12,000 data scientists "immediately."

Brower at Astro Technology makes the safety argument for new technology and is pushing companies he works with to take lessons from aerospace.

"Oil and gas is more brute force versus finesse in aerospace," he explained. "Brute force has got its place, it really does, but finesse is what really keeps you out of trouble, and you have to have some level of sophistication, and the oil companies are starting to come around to that."

Finesse solutions Brower is selling include ultra-sophisticated, fiber-optic sensors that can be attached to pipelines and give workers hundreds of miles away instant readings on temperature, pressure and vibration, detecting signs of potential problems long before they arise. Robot divers with near-human hand dexterity will come next, he hopes.

Cheap oil and changing labor patterns are moving the industry closer to his way of thinking, Brower believes. "We’re starting to get a lot of headway," he said.