‘Not in our history.’ Hurricanes hit targets farther inland 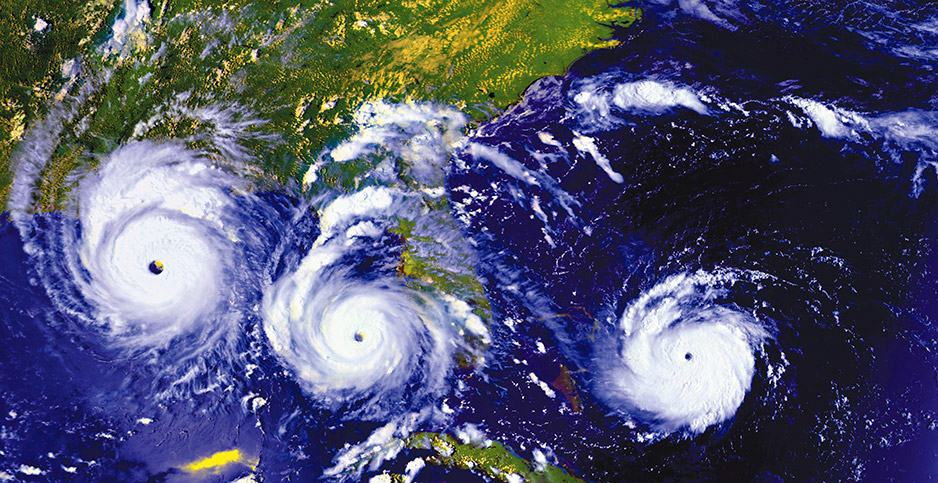 Experts see a way to help cities prepare for tropical storms that will likely be larger, less predictable and more damaging than hurricanes of the past.

One focus is on inland areas that have recently come within reach of stronger climate-driven hurricanes and stand to benefit from improved emergency planning and stronger building codes.

The proposed adaptation efforts come as intensifying storms could pose costly surprises to insurance companies and reinsurers because they draw their strength from warming sea surface temperatures. Those risks are often muted in statistical models used by insurers to estimate damages because they focus on historic storm data.

A study prepared by scientists at the National Center for Atmospheric Research (NCAR) notes that the costs of tropical cyclones have doubled over the last 15 years. The study predicts that the growing reach of storms could lash inland areas with winds that are as much as five times higher than historic storms; rainfall could increase by 45%.

"It means that inland areas could be hit much harder in future tropical storms," explained Cindy Bruyere, the director of NCAR’s Capacity Center for Climate and Weather Extremes and the main author of the study.

Those projections will be true for coastal cities around the world, she said in an interview, explaining that until now, predicting which cities might suffer the most has been problematic. That’s because the expanding reach of storms are based on the laws of physics and most statistical models are based on data drawn from storms of the past.

"If I’m an emergency manager for city X, I would want to know what is the potential damage for my city in the next couple of years," Bruyere said.

While coastal storms have different names around the world — whether hurricanes in the United States, cyclones in Australia, or typhoons in India and the western Pacific — the problem is the same for all of them: They’re impossible to simulate in areas that have never been struck.

So existing statistical models used by insurers don’t take into account the changing nature of future storms and the differing geography of a particular coastline, Bruyere said.

"Statistical models won’t give you the connection between what a given coast is like and the interaction of where water is going to go and how much it’s going to rain in that area," she said.

Bruyere’s team did a number of "impact scenarios" creating "synthetic cyclones" and running them at multiple coastal locations, finding that the most extensive tropical cyclone damage would come from the combination of "destructive wind speeds and heavier rainfall rates." Water intrusion could cause heavier damage to homes and buildings, the researchers predicted.

Cyclone Debbie, which hit the northeast coast of Australia in March 2017, helped prove the point. After pausing over the Coral Sea, where surface temperatures measured an unusually high 86 degrees Fahrenheit, Debbie made a perpendicular strike on the coast of Queensland, driving winds inland at up to 163 mph.

While coastal cities had time to evacuate, Debbie was the most destructive cyclone to hit Australia in 43 years. One town received 35 inches of rain in two days. Another received 21 inches in one day. Both were well south of the traditional inland storm warning area.

Fourteen people died, most of them from enormous floods driven by coastal storm surge and overflowing rivers. Total damage amounted to $3.5 billion. Debbie became known as the "monster cyclone." "Why was aftermath deadlier than the storm itself?" asked one newspaper headline.

The gap between statistical projections and real-world results inspired another experimental application of NCAR’s evolving "Hybrid Weather Research and Forecasting Cyclone Model." This provoked a fresh look at Superstorm Sandy, which crept up the New Jersey coast in late October 2012 and did something that until then was statistically improbable.

Most tropical storms historically approach the East Coast from the south, but Sandy hit the coastline from a nearly perpendicular angle. That made it one of the most damaging weather events in U.S. history. A 14-foot storm surge drowned parts of New York City’s subway system.

Financial damages amounted to $71.4 billion, including power outages for 8.5 million people and 20,000 canceled airline flights. Bruyere and her team used their cyclone model to create 198 storm scenarios that revealed how the unusual angle of impact helped multiply the storm’s force and extended its reach.

"With this model, we can look at storms that are not in our history," Bruyere said. "We can place storms over warmer water than we typically have or near parts of the coast where storms don’t typically make landfall, but which may be impacted in the future. The results will help us plan for some of the risks of a changing climate."

She believes the approach can be used globally to cover areas that experience heavy cyclones and those that don’t — yet. Because warming waters are creeping toward the Earth’s poles, moving north along the U.S. coastlines and southward along the coasts of Australia, more areas have to think about potential storm problems.

The team’s modeling can help emergency managers grapple with the risks of climate change in areas that haven’t experienced heavy storms, the experts said.

It may also help insurers and homeowners get a better grasp of their financial exposure as the reach of storm-driven winds and rain extends farther inland. While coastal communities are often protected by stricter building codes and flood defenses, inland areas traditionally regarded as being safer during storms have fewer protections.

There is at least one sign of progress. The massive impact of the novel coronavirus has put the U.S. Congress in a mood to help improve the nation’s resilience to disasters (Climatewire, April 16).

And in the case of future coastal storms, climate change exacerbates disasters that have already begun to happen and that will, like the coronavirus, require future planning and more public awareness.

President Trump’s recent decision to declare every state a "major disaster" because of COVID-19 and a 2018 law that requires states to set aside a percentage of disaster funds for projects that mitigate future hazards may set the stage for a multibillion-dollar program to give planners a more complete look at future storm threats.