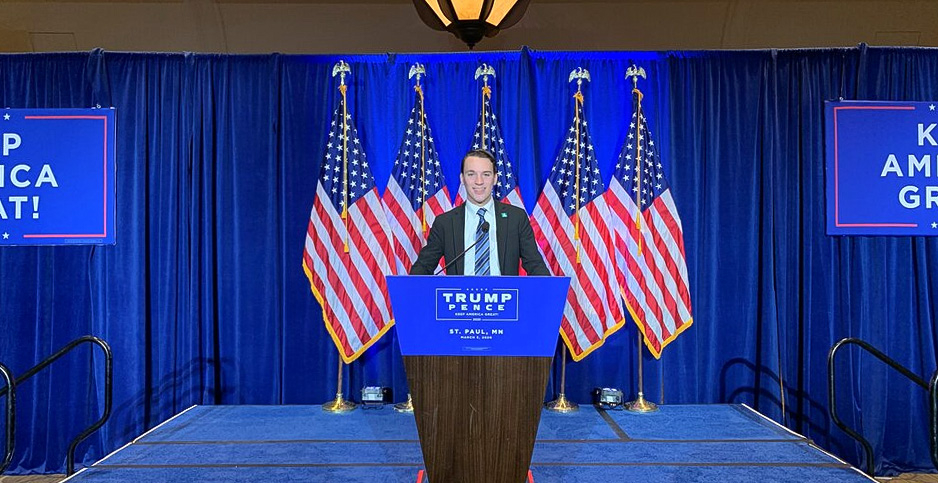 Two other former political appointees from the agency are running in next year’s elections as Republicans.

Wadi Yakhour, a staffer on Zinke’s advance team, is seeking a congressional seat in Washington state, while Nick Davis, a scheduling and advance staffer for Zinke and his successor David Bernhardt, is running for Ohio’s state Legislature. Davis also worked as an adviser to then-National Park Service chief P. Daniel Smith.

All three are campaigning as staunch advocates for former President Trump and hoping to carry on his "America First" agenda against what they see as threats from the left.

"We all agreed and believed in the agenda and the priorities of the administration," Todd Willens, who was Bernhardt’s chief of staff and formerly an associate deputy secretary at Interior, told E&E News.

Speaking of the possibility that Trump could run for president in 2024, Willens said of former Trump appointees: "Some felt probably [the work] was never finished, and it’s paused. Some felt like there were some really good ideas there and they could take home and do on a micro scale."

Willens, who is now a lobbyist, added: "You’re seeing folks that are motivated, they want to give back, they sacrificed a lot when they went to D.C. to take the jobs in many cases."

They have some company among Trump appointees in seeking office. Former White House press secretary Sarah Huckabee Sanders is running to be Arkansas’ governor, and Brian Harrison, a former Health and Human Services senior aide, ran unsuccessfully in a special election for Texas’ 6th District seat.

Former Navy Secretary Kenneth Braithwaite is considering running for Senate in Pennsylvania, and White House staffer Cliff Sims is mulling a run for Senate in Alabama.

Zinke, who served from 2017 to 2019 before resigning amid various ethical allegations that he denies, launched his campaign earlier this year, hoping to represent the 2nd District that Montana gained in the most recent census reapportionment (E&E Daily, May 18).

Davis came to Interior in 2018, shortly after graduating from Ohio State University. He’s long been an outspoken Trump supporter and volunteered on the former president’s 2016 campaign.

He was active in student government, a position in which he frequently clashed with what he saw as an extremely liberal student body. He once criticized an effort to replace Columbus Day with a holiday honoring Native Americans, which he saw as an affront to explorer Christopher Columbus and his contributions to American history.

"The indigenous people who were here before Christopher Columbus, they weren’t civilized people," he said in 2017.

In an interview with E&E News, Davis said that he was "incredibly proud of all of our accomplishments at Interior under President Trump, which includes providing energy independence for the American people, increasing access to taxpayer-funded public lands, and opening up our national parks and lands for outdoor recreation during the pandemic, when the left wanted them closed." He was involved with actions like the NPS’s moves to open more areas to e-bikes, he said.

Davis is running for the 85th House District in Ohio, a rural area west of Columbus that includes his hometown of West Liberty. Incumbent Nino Vitale is retiring from the safe Republican seat due to term limits.

His priorities include cracking down on abortion and building more natural gas pipeline infrastructure for rural areas like his district, which he said would reduce energy prices and boost economic activity.

"Part of the reason I’m running is because I think it’s very important for people like me — presidential appointees from the Trump administration — to run for office to carry on the Trump agenda, so President Trump’s accomplishments are not lost upon the chaos of this new administration and its radical leftist policies," he said.

Yakhour is running against Rep. Jaime Herrera Beutler (R) in Washington’s 3rd District, in the state’s southwest corner. Herrera Beutler enraged Trump earlier this year when she voted to impeach him and stated that House Minority Leader Kevin McCarthy (R-Calif.) asked Trump to "call off" pro-Trump rioters as they attacked the Capitol on Jan. 6.

"I don’t know why she did that, besides maybe a haphazard decision. Maybe she’s spending too much time with her Democrat friends in Washington, D.C., because she doesn’t really do too much in the home district," Yakhour said in a March interview with KSoK Uncensored, a streaming program from Right America Media.

Yakhour is one of four Republicans and three Democrats attempting to unseat Herrera Beutler. Washington holds open, nonpartisan primaries, and the top two finishers go to the general election, so Herrera Beutler might not be eliminated in the primary.

Yakhour worked at Interior in 2017 under Zinke, then went to the Selective Service System, where he became chief of staff.

"I traveled with the secretary, made sure that he was going where he needed to be. Saw a lot of parts of the country I’d never been to. Saw national parks, which I never really had the time to visit. And I loved it," he said in the March interview. "I think that was one of the best experiences I had for the administration, because it was a lot of fun. I love to travel, I love to see new things."

He cites his experience in the Trump administration as a key qualification in the campaign.

"I have seen the ins and outs of Washington, D.C. I worked with a full spectrum of appointed and elected officials in both local and federal government: presidential Cabinet members, governors, senators, local reps, state reps, county chairs," he said at a Washington State Republican Party forum earlier in March.

He said he managed the agency "from top to bottom" and "all the mechanisms that go with it: HR, IT, budget, public affairs."

"So from the Navy, from my time in Washington, D.C., and from this political climate, I have been bulletproofed, and I have been torture-tested to withstand this, and to come back and serve my whole community where I was born and raised," he said.

Yakhour has revealed little in the way of specific policies he supports. But at the forum, he said he backs the state’s timber industry and wants to abolish EPA.

Trump has not endorsed a candidate in the race, and his Save America political action committee did not return a request for comment, but he has made it clear he wants Herrera Beutler and the 16 other Republican lawmakers who voted to impeach and convict him to be out of office.

"Get rid of them all," he said in a February speech at the Conservative Political Action Conference.