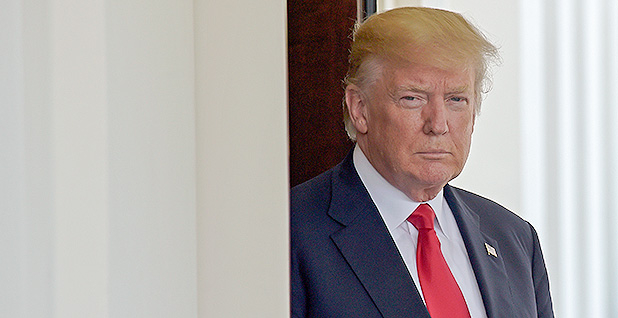 President Trump yesterday told reporters he was hearing from "a lot of people, both ways," on the Paris Agreement. A decision is expected today. Susan Walsh/AP Images

President Trump will seek to end months of disunity in the White House this afternoon by announcing his decision on the Paris climate agreement, an issue that has sown discord among Cabinet members and senior advisers.

The decision comes after Trump has acknowledged facing immense pressure in the final hours before the planned announcement at 3 p.m. in the Rose Garden, where he will be joined by Vice President Mike Pence. The game-show-style drama of his repeated teases on Twitter of the announcement has underscored the controversy that’s shadowing both of his options: staying in the accord or leaving it.

As news spread early yesterday that he had seemed to settle on withdrawing, some administration officials countered strongly that the final decision hadn’t been made, even as others said it was sealed up.

"Not a done deal," one official said.

Another, when asked if Trump was pulling out, answered, "Yup."

Trump seemed to fuel that uncertainty. While meeting with Vietnamese Prime Minister Nguyen Xuan Phuc at the White House yesterday, a pool reporter asked the president whether he was close to making a decision.

He was also asked if business CEOs were pressuring him on the Paris Agreement and if he thinks climate change is a hoax. The questions came as Elon Musk, founder of Tesla Inc., indicated on Twitter that he would quit the president’s business advisory council and his manufacturing jobs initiative if Trump withdraws from Paris.

The inquiries also coincided with an announcement yesterday by General Electric Co. that it had signed a deal with Vietnam worth $5.6 billion for power generation and other equipment. Trump applauded the move because it makes "jobs for the United States."

Earlier this month, Jeff Immelt, chairman and chief executive of GE, promoted global trade in a speech at Georgetown University while urging Trump to have the United States remain a party to the Paris Agreement. "We are for staying in the treaty," Immelt said. "I think global engagement is a good thing."

Trump acknowledged that he had been hearing those views and their counterpoints.

"I’m hearing from a lot of people, both ways. Both ways," Trump said yesterday.

One pool reporter, referring to the Paris Agreement, asked, "Are you leaning in a direction, sir?"

Trump: "I’m hearing from a lot of people both ways."

Another reporter then asked, "Do you believe that climate change is a hoax still?"

Trump: "Thank you, everybody."

The president might not have answered, but the White House did. A joint statement between the United States and Vietnam pointed to rising temperatures as a real risk. "The United States also affirmed its assistance to Vietnam in combating climate change via concrete mitigation and adaptation measures," the statement said.

Earlier, in the White House briefing room, numerous reporters pushed press secretary Sean Spicer to explain if news reports were accurate that Trump was planning to pull out of the Paris Agreement. The off-camera gaggle marked perhaps the first time in Trump’s presidency that Spicer fielded so many questions about climate change.

"I obviously don’t know whether or not he’s made it, but when he’s ready to make an announcement, he’ll make it clear," Spicer said when asked if Trump has made a final decision.

The mixed signals overwhelmed some observers.

"It’s like a little soap opera or telenovela," said Alden Meyer, strategic director for the Union of Concerned Scientists. "I don’t know what to expect anymore. Is it all smoke and mirrors? Or there really is give-and-take, and he hasn’t made up his mind? I can’t game it out."

Key industry and conservative sources were surprised by yesterday’s early-morning news reports that Trump would exit the deal, having heard recently that he was leaning toward remaining.

Some suggested Trump advisers opposed to the Paris Agreement might have leaked the idea in the hope of pushing him into a decision.

By afternoon, one source had heard from the White House that a final call had not yet been made but would come later this week.

Another had been convinced Trump was set to leave.

Chrissy Harbin, director of federal affairs with Americans for Prosperity, said she was concerned early yesterday that people might be reading too much into Trump’s meeting with U.S. EPA Administrator Scott Pruitt, who wants to pull out of the international deal.

But a few hours later, she had changed her mind after chatting with "a number of people in the know."

Frank Maisano, senior principal at Bracewell LLP, a firm representing energy companies, said exiting Paris would be a setback to how the United States is perceived by the international community. Stepping back from climate talks might also mean that other countries get better terms when they make their greenhouse gas reduction commitments, he said. He recalled a similar effect when the United States withdrew from the Kyoto Protocol in 2001.

Maisano also noted that leaving the Paris deal could take some time and that White House advisers on both sides would continue to lobby Trump during that period.