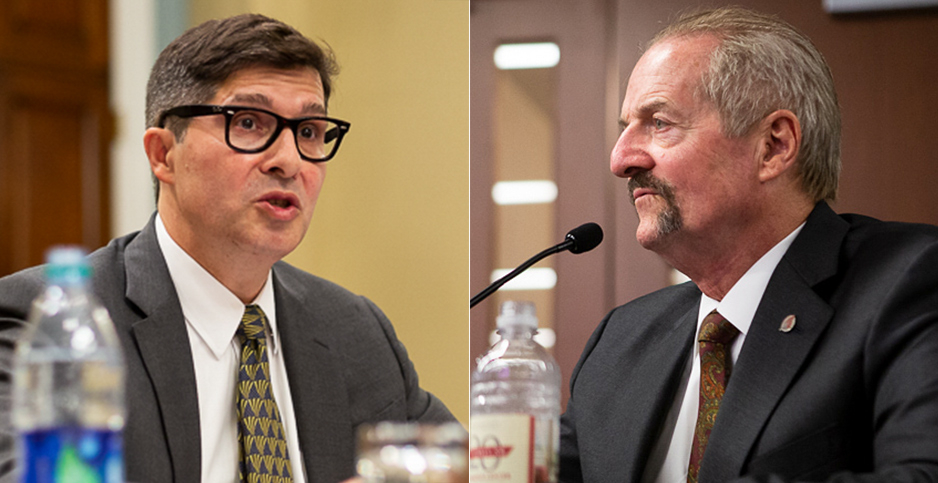 This story was updated at 3 p.m. EDT.

The Interior Department’s top lawyer said the agency has used designations similar to the one that put William Perry Pendley in charge of the Bureau of Land Management more than 180 times in the past two decades.

The number is included at the bottom of the tweet, which is a formal statement in response to an order issued late Friday by Chief Judge Brian Morris of the U.S. District Court for the District of Montana that said Pendley was illegally performing the duties of BLM director (Greenwire, Sept. 25).

Morris’ order states that only Interior Secretary David Bernhardt "can perform functions or duties of the BLM Director," pending the formal designation by President Trump of an acting director.

Jorjani told E&E News in a statement Monday that Interior will challenge Morris’ order to the 9th U.S. Circuit Court of Appeals. A notice of appeal has not yet been filed.

Jorjani did not indicate as such in his statement, but sources told E&E News that Interior is almost certain to also file a motion with Morris, an Obama appointee, requesting he suspend his order until the merits of the case are decided by the appeal’s court.

Morris’ order — which was in response to a formal motion that’s part of a lawsuit Montana Gov. Steve Bullock (D) filed in July challenging the legality of Pendley’s authority to lead BLM — has created great uncertainty at the bureau. Morris has directed Interior and Bullock to file legal briefs by next week "to address what acts of Pendley … should be set aside" as a result of the order (Greenwire, Sept. 28).

It’s not clear where the 180 number that Jorjani references in the tweet originated. Interior representatives did not respond to a request for more information about the number.

But if true, the number would appear to advance Interior’s position that Morris’ order was out of bounds. Specifically, Jorjani said in a statement accompanying the tweet, the order "is erroneous, fundamentally misinterprets the law and unreasonably attempts to up-end decades of practice spanning multiple presidential administrations from both parties."

It may not be enough to win an appeal, however, said Carl Tobias, a University of Richmond law professor.

"If [Interior] has improperly granted authority to a public official, the number of times it has done so does not make the practice valid," Tobias said in an email.

"I understand there may be some questions about the ruling on Friday regarding William Perry Pendley’s leadership role at the Bureau of Land Management," Hammond wrote. "To clarify the situation, I want to share with you a statement from the Solicitor of the Department of the Interior Daniel Jorjani."

Jorjani notes in his statement — which is identical to one Interior sent to E&E News on Monday — that the agency "will comply with the Court’s Order, while we move forward with an appeal and review all other legal options."

Hammond added, "As stated above, Secretary Bernhardt leads the bureau and relies on the BLM’s management team to carry out the mission. Deputy Director for Programs and Policy, William Perry Pendley, will continue to serve in his leadership role."

The first memo was signed in 2010 by Bob Abbey, who served as BLM director during President Obama’s first term in office. It sets the order of positions, subject to federal law, that "will automatically succeed the Director in the absence of the incumbent."

It lists the deputy director of operations as first in line to "perform all duties and responsibilities of the Director" when the position is vacant.

The second memo was signed in November 2012 by Mike Pool, who at the time was the formal acting BLM director.

It lists the BLM senior adviser for land management as the first in line to assume the duties of the director, followed by the deputy director of operations.

Pool was also the senior adviser for land management, thereby granting him the authority to lead the bureau as acting director for nearly a year after Abbey retired, an Interior spokesman said.

The current BLM deputy director of operations is Mike Nedd.

It’s not clear why Pendley was chosen by Bernhardt to lead the bureau, and not Nedd.

Pendley, however, did issue a succession memo without public notice on May 22 that places the deputy director of policy and programs as first up on the succession order.

The Interior spokesman pointed once again to the Pool succession memo that, he said, did roughly the same thing Pendley did in his succession order. Pool, however, was a career BLM official; Pendley had never worked at BLM before Bernhardt made him deputy director of policy and programs in July 2019.

Morris blasted Pendley’s succession order in his ruling, as well as a series of secretarial orders by Bernhardt that added the phrase "exercising the authority of director" to Pendley’s title.

Morris wrote that both "represent unlawful attempts to avoid the constitutional requirements of the Appointments Clause" of the U.S. Constitution "and the statutory requirements" of the Federal Vacancies Reform Act.

The Pendley succession order, in particular, appeared to amuse Morris.