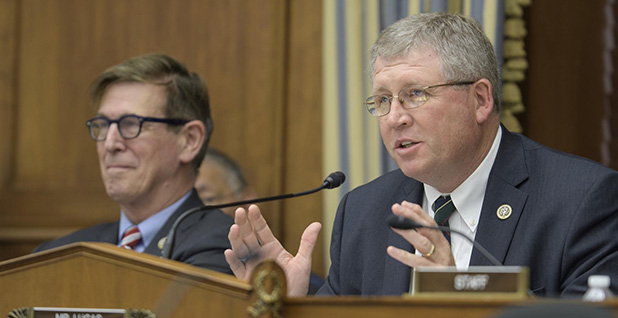 For the first time in years, the House Science, Space and Technology Committee will hear from a full slate of researchers who accept climate science.

The panel’s hearing today contrasts sharply to those that occurred during the last eight years, when Republicans often invited witnesses who expressed skepticism about mainstream climate science. Instead, experts in sea-level rise and Arctic impacts from global warming will brief the committee on the latest climate research.

Committee Republicans, who hosted dozens of climate skeptics in previous years, invited Joseph Majkut, director of climate policy at the Niskanen Center. Majkut has a doctorate in atmospheric sciences from Princeton University, and he is a proponent of a carbon tax and other policies to address rising temperatures.

"The fact that they’re willing to listen is really good, I also think the key lesson from science is that this is a difficult problem to manage and that the Science Committee can play a significant role in helping do that," Majkut said in an interview. "The science committee is a fair place to start righting the ship when it comes to climate, that’s the place where Congress has close ties to the research community."

Democrats have made climate change a top priority for the 116th Congress, holding a series of hearings in multiple committees, including the Natural Resources and Energy and Commerce panels. Those hearings have largely played out along party lines, with Democrats using climate science to showcase what they say is GOP abstinence, while Republicans attacked the "Green New Deal."

Last week, Republicans on the Natural Resources Committee invited Judith Curry, a scientist who claims that climate policy would be more costly than doing nothing to address rising temperatures. Curry, a climate scientist who retired from the Georgia Institute of Technology, is a longtime favorite of congressional Republicans who want to build a narrative of uncertainty in climate science. She is among a small number of published researchers who hold such views.

But some observers think conservative views against climate change might be thawing.

Majkut’s invitation and the questions from some Republicans in committee hearings last week show a new enthusiasm in the party for constructive engagement on climate change, said Bob Inglis, a former Republican congressman from South Carolina and onetime Science Committee member. That could be the start of viable bipartisan solutions, he said. That the GOP is willing to invite guests who focus on practical ideas to mitigate global warming is a remarkable diversion from the direction of past hearings.

"I think we could be approaching a tipping point," Inglis said. "Republicans are focused on pragmatic solutions to climate change."

The committee’s ranking GOP member, Rep. Frank Lucas of Oklahoma, invited Majkut to explain the current impacts of climate change, according to a committee spokeswoman.

"As a rancher who represents a large community of agricultural producers, Ranking Member Lucas wants to better understand the complex relationship between climate change and weather," the spokeswoman said in a statement. "He’s interested in how we can help communities increase preparedness for weather events and help businesses benefit from better short-term weather prediction."

That’s a departure from the way the Science Committee operated for the last eight years.

During the tenure of former Chairman Lamar Smith of Texas, the committee was wielded as a political weapon against climate science. It subpoenaed the emails of federal climate scientists and promoted conspiracy theories that scientists were exaggerating global warming. The committee’s Twitter account, when run by Republicans, sometimes featured conservative media attacks on climate science.

Some committee members under Smith have transformed from climate skeptics to advocates for climate action. Former Rep. Jim Bridenstine of Oklahoma, who once demanded that former President Obama apologize for spending so much on climate science, is now the NASA administrator and a steward of climate research. Last year in a Senate hearing he acknowledged his views on climate science have "evolved" and that he no longer questions the research.

"These trends indicate that the political climate of climate change is shifting toward action," Anthony Leiserowitz, director of the Yale program, said in a statement.

To be sure, the partisan debate on climate change isn’t over.

Republican members of the bipartisan Climate Solutions Caucus were decimated in the November elections, and their replacements have yet to be named by caucus leaders. GOP lawmakers, like Rep. Paul Gosar of Arizona, continue to mock the "Green New Deal." He called it a "socialist fairy tale."

What’s more, the Science Committee itself still has a number of members who don’t accept the consensus on climate science, including Rep. Mo Brooks (R-Ala.), who blamed rising sea levels on rocks falling into the ocean.

Still, while it’s not time to declare a sea change in Washington, the shift occurring on the Science Committee is notable, Majkut said. Even the most intransigent political opinions can transform relatively quickly, he said.

"We’ve been making progress on this for years," he said. "But the thing is it’s tectonic plates. Tectonic plates shift and that’s a slow process, every once in a while you get a slip and tremor, and I hope what we’re seeing is some of that."