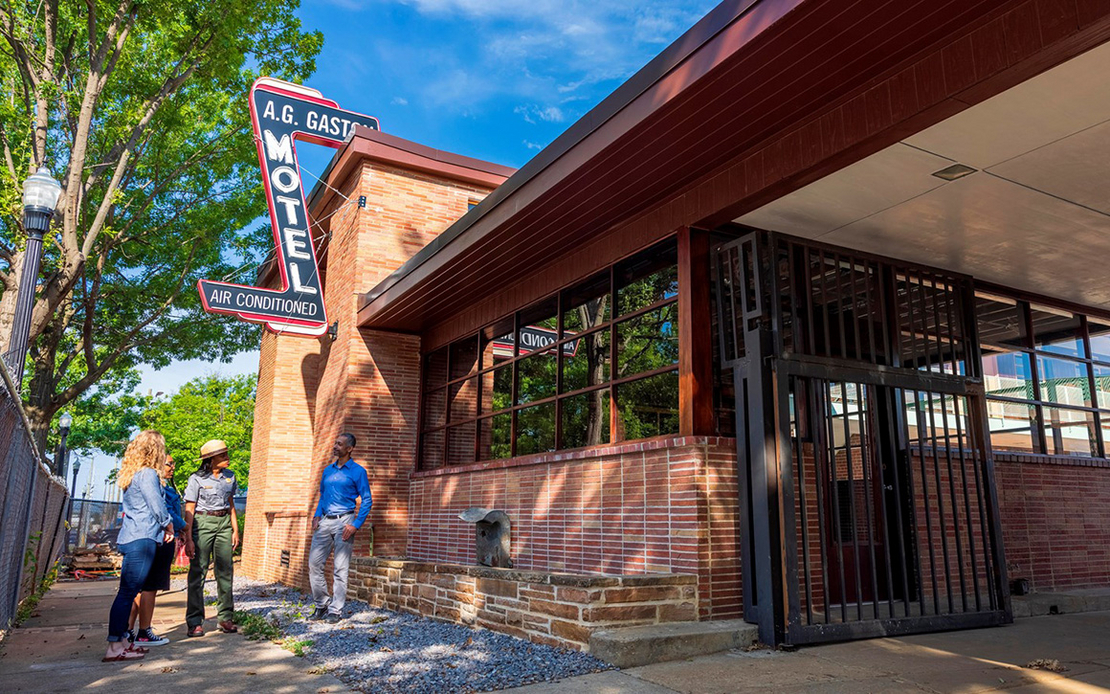 A park ranger and visitors outside the A.G. Gaston Motel in Birmingham, Ala. Chris Granger/Alabama Tourism Department/National Park Service

Under the plan, the monument would be anchored by the historic A.G. Gaston Motel in downtown Birmingham, which provided lodging and planning space for the late Rev. Martin Luther King Jr. and other civil rights leaders during protests in 1963.

Civil rights leaders held daily planning meetings at the motel. While staying there, King also was served with an injunction against further marches.

The building is now co-owned by the park service and the city of Birmingham.

NPS officials said the motel, built in 1954, would be restored “to reflect the conditions of the 1963 period of significance, when the property achieved national historical importance.” The park service said the renovated motel would also be used as the park’s primary visitor contact station.

The park service said it expected the project to provide a boost to the local economy, too.

“Under this alternative, it is reasonable to believe that visitation to the monument would increase as a result of enhanced visitor experiences at a restored, accessible Gaston Motel and increased local and regional partnership opportunities,” NPS said.

The agency said it would accept public comments on its plan until Nov. 21.

The new monument includes a handful of affiliated sites, including the 16th Street Baptist Church, which was the site of a bombing by Ku Klux Klan members in 1963 that killed four girls, and Kelly Ingram Park, where Birmingham Public Safety Commissioner Bull Connor used hoses and dogs to thwart young protesters.

The marches in the city helped propel the modern civil rights movement as Americans and people around the world saw the images of the aggressive police tactics.

After witnessing the violence, then-President John Kennedy joined the cause of the protesters, helping make civil rights a national issue and setting the stage for the passage of the Civil Rights Act of 1964.

Obama created the monument on Jan. 12, 2017, as one of his last official acts, using powers granted to all presidents under the 1906 Antiquities Act.

At the time, the White House said the designation was part of Obama’s effort “to promote diversity in our national parks and other public lands” and to preserve places “that are culturally and historically significant and that reflect the story of all Americans.”

Kristofer Butcher, the monument’s superintendent, said the plan would “set the long-term direction” of the new park site, adding that general management plans are aimed at “defining the conditions necessary to optimally preserve resources, manage operations and provide for visitor use and enjoyment.”