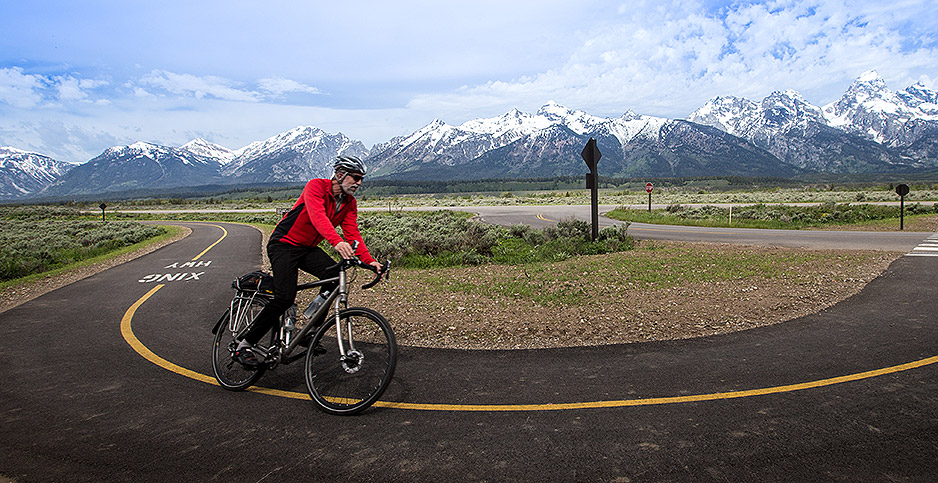 A man bikes on a road at Grand Teton National Park. The Trump administration in August said electric bikes would be allowed on trails at national parks. NPS

The National Park Service has disbanded an industry-dominated electric bike advisory group after an advocacy organization complained that it violated federal law.

Public Employees for Environmental Responsibility (PEER) said the E-bike Partner and Agency Group did not comply with federal transparency requirements because the park service never gave public notice of its meetings.

PEER said the e-bike lobbyists had at least eight private meetings "with a large array of federal officials," with quarterly teleconferences that began in September 2017.

The group was shut down after the last call Oct. 10, according to emails obtained by PEER under the Freedom of Information Act.

"This e-bike call will conclude our ‘Partner and Agency’ calls. … This is to ensure that we avoid any conflict with the Federal Advisory Committee Act," the NPS convener wrote to members of the advisory group.

PEER said the Federal Advisory Committee Act, known as FACA, requires that regular private industry advisory meetings with federal officials be announced in the Federal Register and that meeting minutes and other materials be made available to the public.

The issue also caused internal debate, with one Forest Service official writing in an email that "I increasingly feel uneasy" about participating because the meetings were not open and included only e-bike and mountain biking advocates.

In August, Interior Secretary David Bernhardt ordered the park service to allow e-bikes on any trails used by human-powered bikes.

"Shutting down the e-bikes group after eight meetings and industry had accomplished its policy goal is just like shutting the barn door after all the horses bolted," Peter Jenkins, PEER’s senior counsel, said today. "This episode indicates the pervasive industry influence over Interior Department decisionmaking."

The park service disbanded another industry-dominated committee just last month, shutting down an outdoor recreation advisory panel that had proposed expanding private services at campgrounds across the country (Greenwire, Nov. 14).

Jenkins said NPS kept its e-bike meetings secret because they "could not succeed in the light of day."

A coalition of advocacy groups that included PEER sued the park service earlier this month, seeking to restore the ban on e-bikes in national parks (Greenwire, Dec. 5).

The lawsuit, filed in the U.S. District Court for the District of Columbia, alleges that NPS developed its new e-bike policy based on recommendations from the advisory group.

PEER said at least 25 NPS units have already acted to put in place the new policy.

NPS did not immediately respond to a request for comment this morning.

When the lawsuit was filed, an NPS spokesman said that "we strongly disagree with the premise" of the complaint and that the new policy "enhances fun and healthy recreational opportunities" for park visitors.