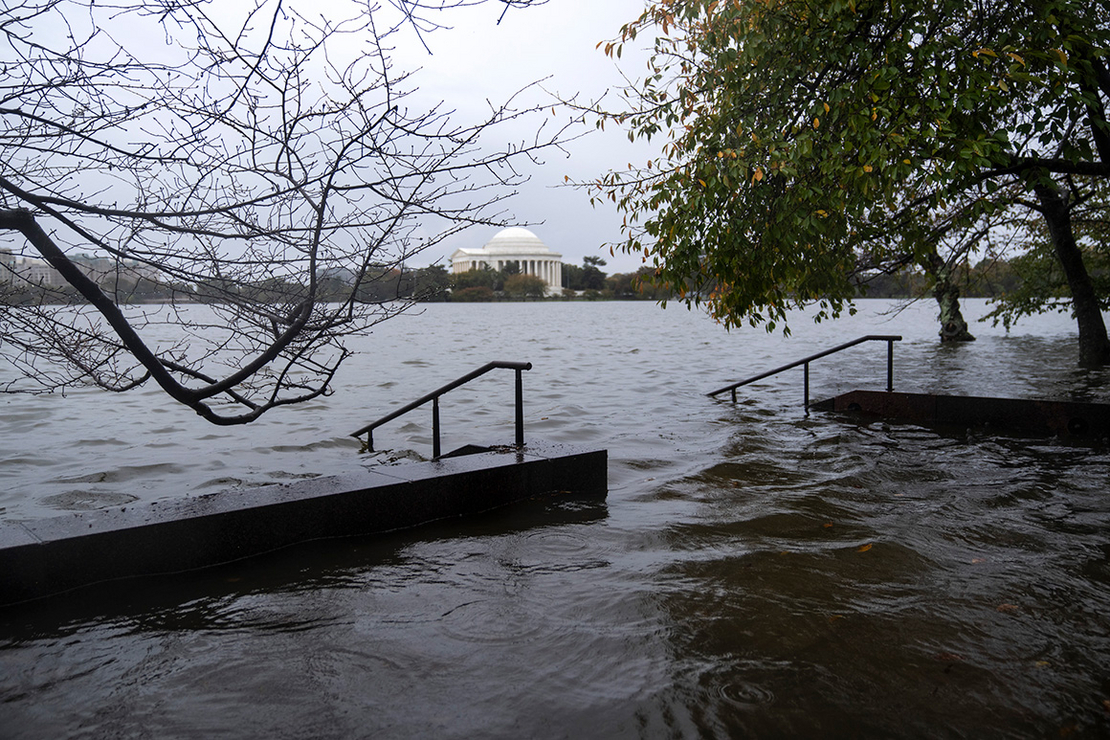 Rising water covered up stairs along the Tidal Basin after heavy rains caused tidal flooding in the mid-Atlantic region on Oct. 29, 2021, in Washington. Drew Angerer/Getty Images

The National Park Service has launched the first phase of a project that calls for repairing the deteriorating sea walls and shoreline landscape along the historic Tidal Basin and West Potomac Park on the National Mall.

The park service described the project as “massive” but said it was necessary as age, high water and poor drainage have taken a toll on the walls, making them no longer structurally sound and a threat to visitor safety.

“Without improvements, the walls will continue to deteriorate and fail, which will lead to walkways buckling and soil eroding,” NPS said in a statement today.

To get the project started, the agency said it had awarded a $5.7 million contract “to begin the planning and compliance process,” using funds generated from the Great American Outdoors Act.

“The sea walls are a critical component to protecting the longevity of our nation’s treasures, such as the Thomas Jefferson and Franklin Delano Roosevelt memorials,” said National Mall and Memorial Parks Superintendent Jeff Reinbold.

In the statement, Reinbold said the park service plans to incorporate “climate resiliency measures” into the new design as a way to “ensure these special places are protected for generations to come.”

Among other things, the project will include new foundations to support height extensions for the walls if they’re needed to handle storm surges, the agency said.

NPS said the project would also decrease the amount of time spent by employees on “reactive maintenance duties,” including cleaning up debris from high tides that flow over the walls and replacing cherry blossom tress that suffer or die when their roots become too saturated.

The park service said it expects to award “a design-build contract” for the project by the late summer of 2023 or early in 2024.

The Tidal Basin, which measures roughly 107 acres in size, was first built in the 1800s, but the sea wall was not completed until the 1940s, according to NPS.

In 2019, the National Trust for Historic Preservation included the Tidal Basin on its list of “America’s 11 Most Endangered Historic Places” (Greenwire, May 30, 2019).