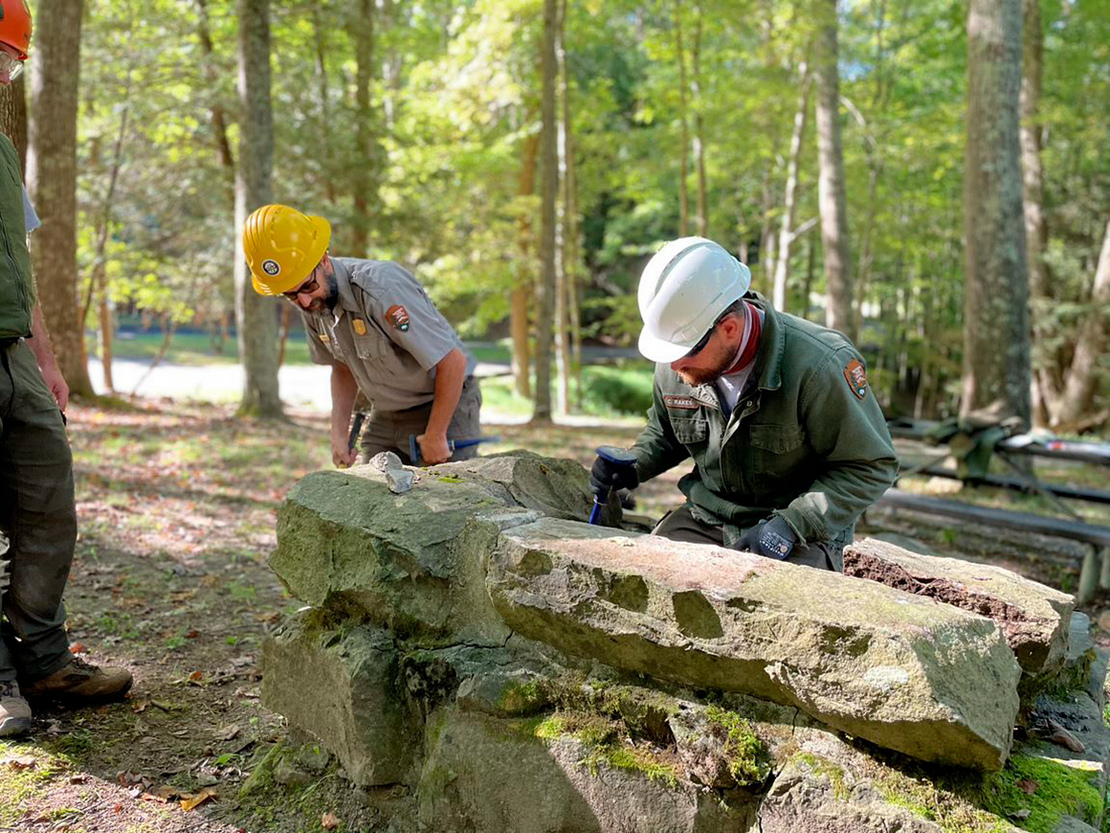 Crews worked to restore historic masonry grills near Shelter 1 at Grandview in New River Gorge National Park and Preserve in West Virginia in September. The work was paid for through the Great American Outdoors Act. Marcia Markley/National Park Service/AP Photo

“We went through a lot of effort, time, struggle to pass the bipartisan Great American Outdoors Act, a big part of which was to tackle deferred maintenance. But let’s stop digging the hole, OK?” King (I-Maine) told Haaland at a Senate Energy and Natural Resources Committee budget hearing.

King, who heads the panel’s Subcommittee on National Parks, said the department’s fiscal 2023 budget request of $2.8 billion for NPS repairs was inadequate and needed to be revised, noting that the agency’s assets are now valued at $400 billion.

“That’s less than 1 percent — the general industry standard is 2 to 4 percent of value for maintenance,” King said.

He also said the agency needs a full-time equivalent of 23,000 employees, an increase of more than 2,500 from the 20,495 full-time employee count that NPS Director Chuck Sams pitched to a panel of the House Appropriations Committee earlier this week (E&E Daily, May 19).

King’s remarks provided the latest evidence that the fiscal 2023 budget will likely deliver good news for NPS, it’s just a matter of how much.

“You’re lucky,” Republican Rep. Mike Simpson of Idaho told Sams at a hearing before the House Interior and Environment Appropriations Subcommittee on Wednesday.

Simpson, a veteran House appropriator, told Sams “there is really good bipartisan support” for the park service and added: “I’m sure that will continue because we all love our national parks — in fact, the reality is we love them too much.”

NPS is feeling the love on Capitol Hill as the agency comes out of two pandemic years that fueled the soaring demand at its most popular parks — 44 of them set all-time attendance records in 2021. At the same time, park backers say, staffing has not kept pace, forcing employees to take on extra shifts while repair needs pile up.

As Haaland received her scolding for proposing to spend too little on repairs, King also emphasized he believes the staffing shortage has taken a toll.

As an example, King said, Yellowstone’s staffing is “pretty much the same as it was in 2011” even though attendance has almost doubled.

“I’ve traveled to a number of national parks across the country, and it’s a similar story in many places,” she said. “So thank you, I mean, I’m happy that people are getting out to our national parks.”

In recent months, NPS officials say their situation has become more dire as they’ve had a hard time recruiting new workers in a tight labor market, with real estate prices skyrocketing near the most sought-after parks (Greenwire, Feb. 1).

Sams told the Appropriations panel that NPS employees are now “pulling double, triple duty” and that the agency wants to hire another 1,100 full-time employees to ease their load.

President Joe Biden’s budget proposal would give NPS $3.6 billion next year, an increase of 10.6 percent. But Sams said the request did not include recreation fee revenue and other mandatory funding sources and that adding those would increase the overall budget to $4.8 billion next year, allowing NPS to have a contingent of 20,495 full-time employees in the upcoming year.

Senators spent most of the budget hearing yesterday criticizing the Biden administration for not doing enough to advance U.S. energy production, and blamed Haaland for rising gas prices (E&E Daily, May 20).

King, who last year promised to be “an activist chairman” when he took control of the Subcommittee on National Parks, got a laugh from his colleagues when he told them near the end of the hearing that he wanted “to return to the budget, which as I recall was the point of this hearing” (E&E Daily, Sept. 21, 2021).

“Not a return, you’re the first one,” Sen. Joe Manchin (D-W. Va.), the full committee chair, told King. Manchin also made clear his desire to add more workers to most Interior agencies, calling a proposed 8 percent increase in staffing levels “a much-needed restoration from previous cuts.”

King told Haaland “it’s pretty frustrating” to watch the size of the NPS maintenance backlog grow after Congress passed the Great American Outdoors Act in 2020. The law will give Interior Department agencies up to $9.5 billion over five years to address deferred maintenance.

“I’m not blaming this administration — this goes back 30, 40 years,” he said. “But to continue a pattern of underfunding maintenance, and therefore we’re going to have to do this again at some point in the future. I don’t want to do that. Let’s do our maintenance as we should right now.”

The NPS backlog has nearly doubled in five years and is now estimated at $21.8 billion, according to new data from the agency. That’s an increase of more than 88 percent from the $11.6 billion the agency reported to Congress in 2017.

In a statement earlier this month, NPS officials said the change reflected a new assessment process that now provides the public with a “fuller and truer gross cost.” Sams told lawmakers that the new system “captures the full cost of this deferred maintenance, which wasn’t caught previously.”

King earlier wrote a letter to key Senate appropriators, asking them to back a “robust” budget that would allow more to be spent on deferred maintenance and saying that delaying the work “is not a responsible way to manage our nation’s public lands infrastructure.”

Last year, King also suggested expanding the number of parks as one way to deal with the overcrowding (Greenwire, Sept. 7, 2021).

While King is thinking big on NPS spending, he’ll have a lot of convincing to do with some on Capitol Hill.

At Wednesday’s House hearing, Rep. Dave Joyce (R-Ohio), the ranking member of the Interior and Environment Appropriations Subcommittee, said it will be hard for Congress to approve a big budget increase for NPS while the United States faces a national debt of more than $30 trillion. He said lawmakers will need “to make responsible choices where we can.”

“I worry that it will be difficult,” Joyce said.