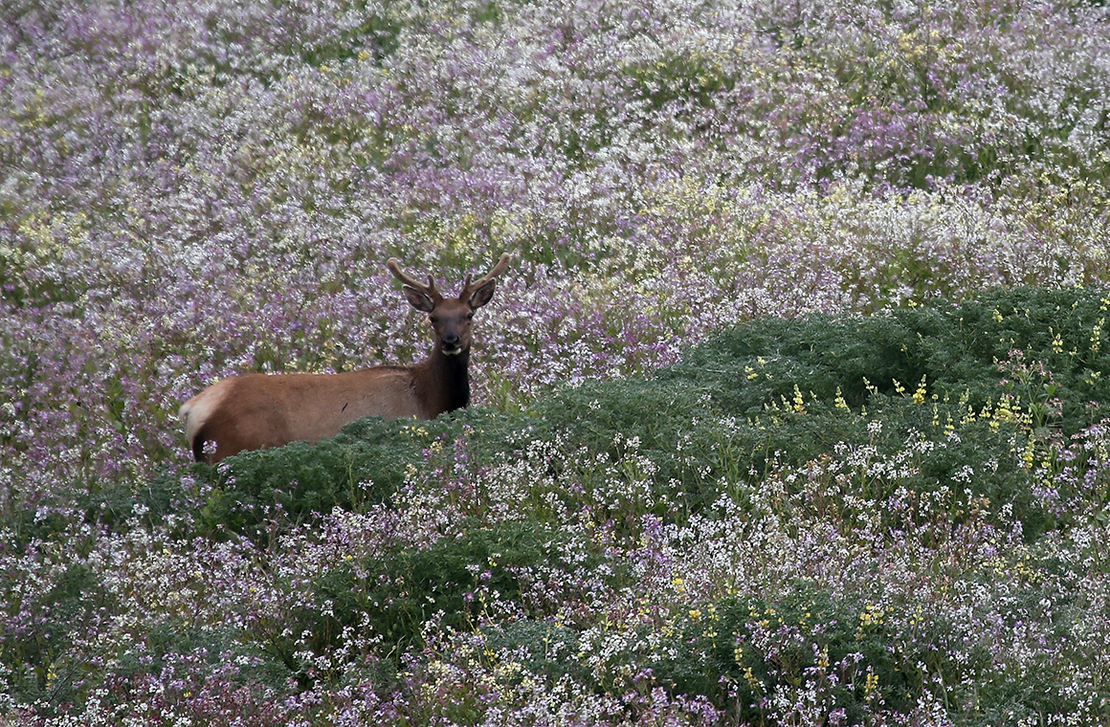 Tule elk graze in a field at Point Reyes National Seashore in 2015. The National Park Service has released a new management plan that will allow continued ranching operations there and the killing of some elk to contain the population. Justin Sullivan/Getty Images

The National Park Service will allow private ranches and dairy farms to continue to operate within Point Reyes National Seashore for decades to come, rejecting calls from environmentalists to curtail private agriculture at the California site.

"Point Reyes National Seashore protects diverse natural and cultural resources that can serve as a model where wilderness and ranching can coexist side by side," Shannon Estenoz, the Interior assistant secretary for fish and wildlife and parks, said in a statement. "We recognize and deeply respect the passion that so many people have about how to best care for this special place and look forward to ongoing stakeholder engagement in the years to come."

The plan will allow NPS to issue new 20-year leases to the more than 20 families currently operating ranches or dairy farms under special leases or permits at the park, which sits about an hour north of San Francisco.

While the amended plan will allow 2,400 "animals units" — typically a cow and calf pair — to be raised on ranches, it will reduce the number of dairy animals from the current 3,325 authorized to 2,425.

The Public Lands Council and the National Cattlemen’s Beef Association praised the NPS decision to reject a proposal that would have eliminated private agriculture.

"This, along with changes that allow for more flexibility in diversification, will allow our producers to better plan for the future of their operations," said Kaitlynn Glover, executive director of the Public Lands Council and National Cattlemen’s Beef Association Natural Resources.

But Glover also criticized the plan’s limitations, which include prohibitions on new dairy operations. Dairy operators will be allowed to convert to beef operations, however.

"While we are frustrated by the reduced flexibility in the final decision, we are encouraged to see this now put to bed in a way that gives our producers certainty," Glover added.

But environmental groups — including those that sued NPS in 2016 to force a new environmental review of the park and its ranches and dairies — expressed disappointment about the final plan (Greenwire, March 14, 2016). They criticized both the ranching decision and how NPS plans to manage the tule elk that live at Point Reyes.

“This decision will cause drastic harm to native wildlife at Point Reyes National Seashore," Center for Biological Diversity Senior Conservation Advocate Jeff Miller said in a statement. "It’s a handout to a small number of private ranchers at the expense of the public, who actually owns Point Reyes and overwhelmingly opposes continued ranching and the killing of native tule elk. We’ll do everything in our power to stop the Park Service from implementing this disaster of a plan and to prevent the slaughter of our beloved tule elk.”

The CBD, along with the Resource Renewal Institute and Western Watersheds Project, filed the original lawsuit over the outdated management plan.

Chance Cutrano, director of programs at the Resource Renewal Institute, likewise told E&E News that he expects new legal challenges to the management plan, whether from environmental groups or the state of California.

"They’re going to have to explain the plan to a federal judge at some point," Cutrano said. He noted that the California Coastal Commission must still review the plan, which could trigger objections from the state.

The amended plan also addresses herds of wild tule elk in the Point Reyes area, which have struggled during drought conditions in the state (Greenwire, Aug. 3).

NPS said it will manage a smaller herd of tule elk in Drakes Beach, potentially culling animals to limit the herd to 140 elk. The larger Limantour herd will be allowed to expand and possibly form a third herd.

According to NPS, the Drakes Beach herd in late 2019 numbered 138 animals and the Limantour herd comprised 163 animals.

Theresa Harlan, who serves as the advocate for Indigenous Access to Homelands on Public Lands, told E&E News that she planned to "continue to advocate for the restoration and the renewal of Point Reyes National Seashore, with an emphasis on Indigenous ecological practices."

Harlan criticized the NPS plan ahead of its release last night, based on draft proposals, arguing that the government should focus on the 10,000-year history of the Coast Miwok people, as opposed to the 160-year history of ranchers in the area.

But Federated Indians of Graton Rancheria Chair Greg Sarris pointed to an agreement his tribe signed with NPS in late August and praised the updated plan. NPS said the memorandum "incorporates Tribal views and traditional ecological knowledge into the management of tule elk and ranchlands" in the park.

"The Federated Indians of Graton Rancheria are delighted with this decision and look forward to working with the park to implement a plan," Sarris said. "This agreement will be a model for tribes and national parks to restore and enhance the national landscape now and for generations to come."