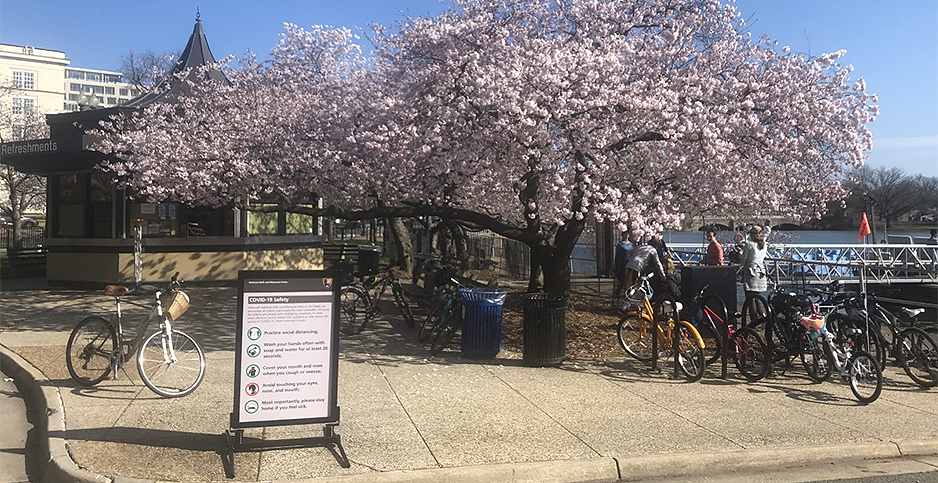 A sign warns visitors to the National Mall in Washington, D.C., to take precautions to halt the spread of the new coronavirus. National Mall and Memorial Parks/NPS

As schools and businesses closed in droves this week, Interior Secretary David Bernhardt urged Americans to head to the national parks as an alternative, ordering the National Park Service to waive all entry fees as an incentive.

Bernhardt is now under growing attack from critics who say he’s jeopardizing the health of both park visitors and NPS employees as the coronavirus pandemic worsens.

"It is irresponsible to urge people to visit national park sites when gathering at other public spaces is no longer considered safe," said Phil Francis, a former park superintendent and chair of the Coalition to Protect America’s National Parks.

While there’s a "great benefit to getting outdoors," he added: "We must put the health and safety of NPS employees and visitors first."

Park and health officials alike found themselves scrambling to react as safety fears mounted at parks across the country this week.

At Death Valley National Park in California, park officials cited a shortage of protective equipment and supplies for custodians when they closed campgrounds.

In southeast Utah, doctors urged tourists to stay away from nearby national parks, fearing that the local hospital in the city of Moab would not be able to handle a flood of COVID-19 patients.

And in Washington, D.C., park officials put up signs urging visitors to maintain a safe distance from each other as they head to the National Mall for the peak weekend of cherry blossom bloom.

Earlier this week, Bernhardt said superintendents at the park service’s 419 sites could react to the pandemic as they see fit, saying they had been "empowered to modify their operations, including closing facilities and canceling programs" (Greenwire, March 17).

So far, more than 150 parks have announced closures of buildings and programs, but even many of them have opted to keep their grounds and trails accessible to the public.

When Bernhardt ordered parks to temporarily suspend all park entry fees until further notice, he noted that other states and municipalities had already taken similar steps (E&E News PM, March 18).

"This small step makes it a little easier for the American public to enjoy the outdoors in our incredible national parks," Bernhardt said, adding that U.S. public lands "offer special outdoor experiences to recreate, embrace nature and implement some social distancing."

The Coalition to Protect America’s National Parks, a group that represents more than 1,700 current and former NPS employees and volunteers, earlier this week called for a nationwide closure of all national park sites.

Francis said yesterday that Bernhardt’s decision to waive fees could now result in overcrowding at national parks instead.

As the situation unfolded in Utah, doctors pleaded with Republican Gov. Gary Herbert for help in discouraging more tourists at local parks.

Jayson O’Neill, director of the Western Values Project, said Bernhardt had issued a "reckless order" and decided to "shoot from the hip" instead of showing leadership.

"This order flies in the face of direct pleas from medical professionals in rural areas with serious concerns about their ability to deal with the coronavirus health crisis," he said.

Jonathan Jarvis, who served as NPS director for eight years under President Obama, said Bernhardt had made a good decision by allowing superintendents to decide whether to close their parks.

"Superintendents are smart enough to figure out how to meet the CDC [Centers for Disease Control and Prevention] requirements of separation for staff and visitors," he said. But he added: "I do worry that by parks being open, it may attract visitors who might otherwise heed the advice to stay at home. I also worry about the health of our employees, concessioners and partners who may become exposed. The bottom line is the NPS should be doing what the public health professionals recommend."

The park service said it is urging visitors to "do their part when visiting a park to follow CDC guidance," by "maintaining a safe distance between yourself and other groups; washing your hands often with soap and water for at least 20 seconds; avoiding touching your eyes, nose, and mouth; covering your mouth and nose when you cough or sneeze; and most importantly, staying home if you feel sick."

NPS officials declined to respond to the call for a national shutdown, to comment on the lack of protective gear at Death Valley or to say whether other parks face similar shortages.

Meanwhile, NPS officials prepared for the peak cherry bloom from tomorrow through Tuesday by posting more than 20 signs around the National Mall, including at all memorials and around the Tidal Basin, which normally attracts thousands of people at this time of year.

"They’re a reminder for those who choose to visit to make informed decisions and follow CDC guidelines to prevent the spread of infectious diseases," said Mike Litterst, chief of communications for National Mall and Memorial Parks.