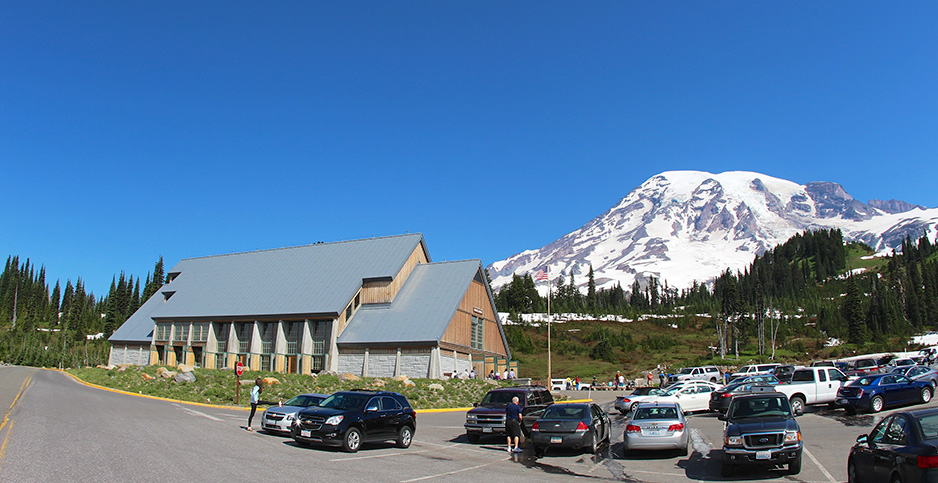 The Coalition to Protect America's National Parks is calling for a shutdown during the coronavirus pandemic. Pictured is the Paradise Henry M. Jackson Visitor Center at Mount Rainier National Park in Washington. daveynin/Flickr

The National Park Service headed toward a partial shutdown today as officials scrambled to close park sites and facilities across the country in response to the coronavirus pandemic.

The closings affected parks both big and small in different ways: Mount Rainier National Park in Washington state said it had shuttered its popular Paradise Jackson Visitor Center and Longmire Museum, while the Casa Grande Ruins National Monument in Arizona said it would suspend all of its operations, beginning today.

With some parks closing and others remaining open, the NPS response to the health crisis quickly evolved into a replay of the agency’s controversial handling of last year’s partial government shutdown.

That pattern appeared likely to continue as NPS officials in Washington issued new guidance that would allow park superintendents to proceed with closings as they best see fit.

"Park superintendents are empowered to modify their operations, including closing facilities and cancelling programs, to address the spread of the coronavirus," Interior Secretary David Bernhardt said this afternoon.

The park service said it was taking "extraordinary steps to implement the latest guidance from the White House, the Centers for Disease Control and Prevention (CDC), and local and state authorities to promote social distancing."

As a result, NPS acting Director David Vela said park superintendents are "assessing their operations now to determine how best to protect the people and their parks going forward."

Meanwhile, a major parks advocacy group urged the service to immediately close all facilities at its 419 sites to protect the public and NPS employees.

"We fully recognize that calling for a nationwide closure of national park sites is unusual," said the Coalition to Protect America’s National Parks, a group of more than 1,700 current and former NPS employees and volunteers. "We also recognize the tremendous disruption such an action will cause to NPS partners, concessioners and the public. But these are unprecedented times that call for unprecedented measures."

Phil Francis, the coalition’s chair, said parks should not be operating with "business as usual."

"To suggest to the public that gathering at national park sites is acceptable when gathering at restaurants, theaters, libraries and other public spaces is no longer safe is irresponsible to the visiting public and employees," Francis said.

The closings hit parks from coast to coast.

Officials at the Pearl Harbor National Monument said they decided to close immediately after consulting with health experts.

In Pennsylvania, the Independence National Historical Park closed, while Gettysburg National Military Park said it would close its visitor center and museum.

Big Bend National Park in Texas said it had closed all visitor centers but would keep its lodge, trails, roads and campgrounds open.

And in Florida, Dry Tortugas National Park and the Castillo de San Marcos and Fort Matanzas national monuments said they would shut down park visitor facilities and suspend programs.

The latest round of closings came after NPS yesterday shut down the Statue of Liberty National Monument in New York (Greenwire, March 16).

On Saturday, the Park Service closed another of its icons, the Washington Monument. Other closings in Washington include Ford’s Theatre, the Belmont-Paul Women’s Equality National Monument and the Old Post Office Tower.

As the list of closings continued to grow, the Park Service advised the public to check with individual parks before trying to visit and to proceed with caution.

"While our NPS sites provide great opportunities for outdoor recreation, we encourage all visitors to follow [Centers for Disease Control and Prevention] guidance to help reduce the spread of COVID-19," the Park Service said.