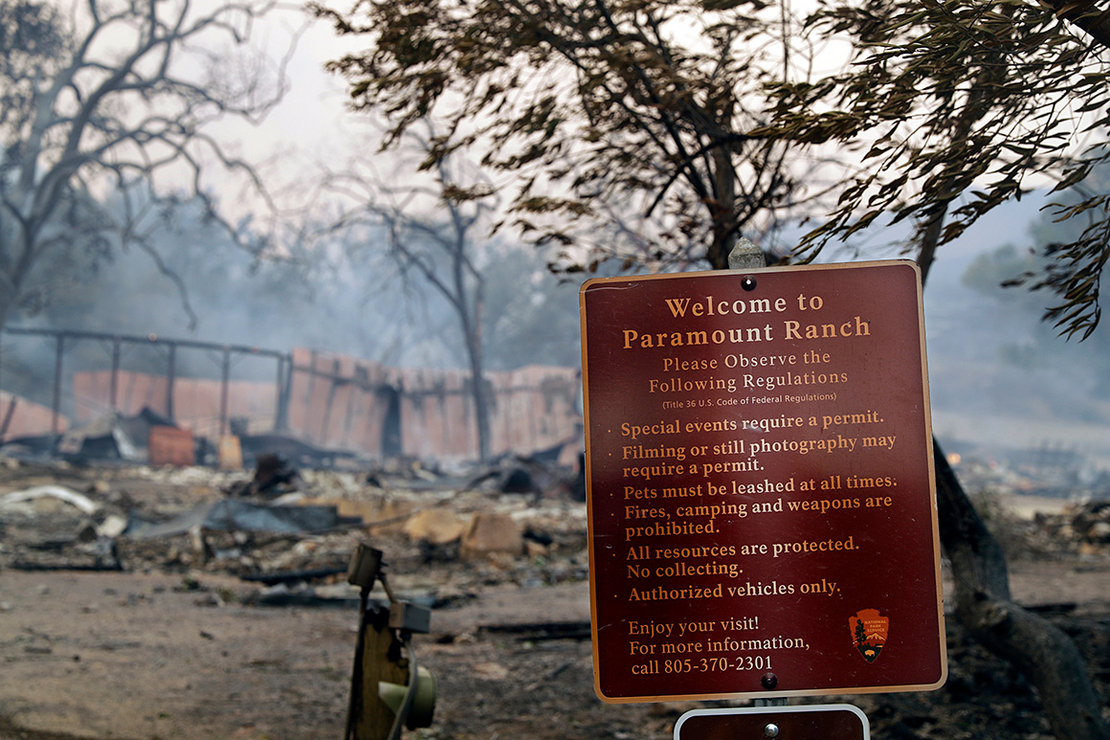 A 2018 file photo shows Paramount Ranch, a frontier Western town built as a movie set that appeared in countless movies and TV shows, after it was decimated by the Woolsey Fire in Agoura Hills, Calif. Marcio Jose Sanchez/AP Photo

When the Woolsey Fire swept through California in 2018, it damaged the historic Paramount Ranch, a working movie ranch and the only National Park Service site that interprets film history for the public.

The fire burned 88 percent of the nearly 24,000 acres in the Santa Monica Mountains National Recreation Area in Los Angeles County, including 26 structures that were a total loss.

Now the ranch is in line for a renovation, part of a new NPS plan called the Woolsey Fire Disaster Recovery Project. It calls for replacing 19 of the lost buildings with nine new structures at three of the 12 developed areas that NPS manages at Santa Monica.

“The proposed action is intended to redevelop the burned areas in a manner that better aligns with the NPS mission of conserving natural and cultural resources and providing high-quality outdoor recreation opportunities for the public,” NPS said in an environmental assessment of the plan.

The service began accepting public comments on the proposal Monday and said it will accept them through Nov. 24.

NPS officials said the fire destroyed all but two structures in the western portion of the ranch property, including four permanent historic structures, six nonpermanent film set buildings, one restroom building, one park ranger residence and a movie set area.

The park service closed the site immediately after the fire, then reopened it again in late November 2018 with fencing around heaps of ash and debris.

But NPS said the fire has hurt attendance and caused a financial hit too.

“Post-fire site visitation levels at Paramount Ranch decreased from pre-fire levels, with approximately 260,163 visitors in 2019 and 191,567 visitors in 2020,” NPS said in the environmental assessment. “In addition, NPS experienced a loss in revenue from $112,000 in the 2017 fiscal year to $17,400 in the 2020 fiscal year at Paramount Ranch associated with the loss of rentable event space.”

The ranch has been a part of movie history since 1927.

William Hertz, a businessman and newspaper publisher from California, bought part of the ranch in 1953 and built a permanent Western town at the site, which brought in shows such as "The Cisco Kid" and "Bat Masterson."

After purchasing part of the original Paramount property in 1980, NPS began revitalizing the old movie ranch, and more shows followed.

In the early 1990s, the ranch was used to film "Dr. Quinn, Medicine Woman." And in later years, productions at the site included HBO’s "Westworld" and "American Sniper."