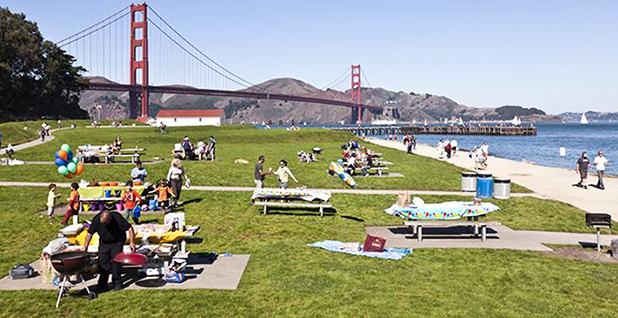 The National Park Service is re-evaluating a permit for a right-wing group to hold a rally at Golden Gate National Recreation Area’s Crissy Field later this month. Presidio of San Francisco California/NPS

Facing pressure from federal and state officials, the National Park Service yesterday said it is re-evaluating a permit given to a right-wing group to hold a rally in San Francisco.

NPS had granted a permit to the Portland, Ore.-based Patriot Prayer to hold an Aug. 26 event at Crissy Field within the Golden Gate National Recreation Area.

In the wake of last weekend’s violence in Charlottesville, Va., Superintendent Cicely Muldoon said yesterday that the park is now taking new public comment on the permit and will issue a decision in seven days — just before the scheduled demonstration.

"Golden Gate National Recreation Area and the U.S. Park Police are closely coordinating with other federal, state and local agencies to ensure a robust plan is in place before we issue a final permit," Muldoon said. "Our highest priority is to ensure public safety, while honoring our obligation to uphold one of our nation’s most cherished constitutional rights, the First Amendment right to freedom of speech."

"I am alarmed at the prospect that Crissy Field will be used as a venue for Patriot Prayer’s incitement, hate, and intimidation," Feinstein said in a letter earlier this week.

It is unclear whether NPS can legally revoke the permit.

Patriot Prayer held a rally in Seattle this week, a day after the violence in Charlottesville that killed one woman and injured 35.

At the Seattle demonstration, Patriot Prayer leader Joey Gibson condemned the violence in Charlottesville, as well as neo-Nazi and white supremacist groups.

On Tucker Carlson’s Fox News show earlier this week, Gibson said he is "absolutely not" a white supremacist. He noted that several speakers at his rally are minorities. And he sharply criticized Pelosi, saying her claims to the contrary were "making it more dangerous for San Francisco" and "trying to rile up her citizens so they will come down there." As a result, Gibson said, there could be "more violence" and "more people in danger."

That message, however, appeared to at least somewhat contradict what occurred a week earlier in Portland, where brawls broke out between Patriot Prayer supporters — wearing attire from President Trump’s campaign — and counterprotesters. Leaders of white supremacist groups, including Identity Evropa, were also visible at that rally. Multiple people were arrested.

"Events in Charlottesville and Seattle," Lee wrote in a letter to Muldoon earlier this week, "are proof that rallies such as these attract extreme and racist fringe groups who only want to provoke malice and incite brutality."