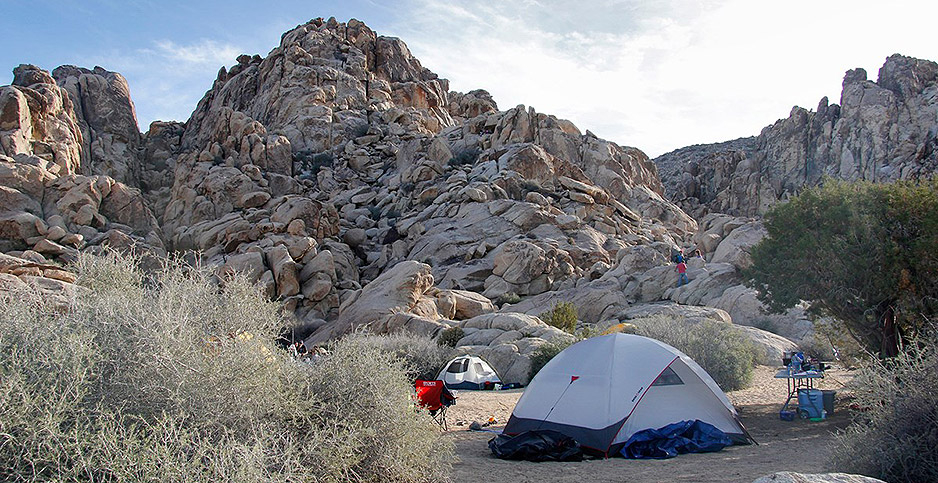 The National Park Service has disbanded an outdoor recreation advisory committee that had recommended more private management of federal campgrounds. A campground at Joshua Tree National Park is pictured. NPS

The National Park Service has disbanded an industry-dominated outdoor recreation advisory panel that wanted to expand private services at campgrounds across the country.

David Vela, who took over as acting director of the agency Oct. 1, said the panel was terminated on Nov. 1. The committee, created by former Interior Secretary Ryan Zinke, had met only twice in person, when it organized in July 2018 and again in September of this year.

Vela offered no specific reason for the decision, which the Park Service said was made by Interior Secretary David Bernhardt. It came after the group drew fire for its recent recommendation to modernize park campgrounds with more private concessions, bringing in such things as food trucks, mobile camp stores and better Wi-Fi. The group suggested first experimenting with pilot programs.

Vela said that the group’s recommendations are under review and that the panel, "like any Federal Advisory Act group, was simply an advisory body to the Department of Interior and the Secretary of the Interior."

He said the 103-year-old Park Service is already working "to create a second century campground experience that supports sound investment and management for campgrounds that may be enjoyed by all."

"The NPS does not intend to modernize every campground but strives to make smart, consistent decisions on when to modernize or rehabilitate a campground based on the park’s unique circumstances, local market and financial factors, and applicable policies and regulations," Vela said in a statement. "As we implement this strategy, the NPS will engage the public and stakeholders for their feedback."

Derrick Crandall, the group’s vice chairman, expressed disappointment with the decision. He said the panel had "such promise and such hope" but was affected by the White House push to reduce the number of federal advisory committees.

"We think it’s terribly important that there still be continued communications with the recreation industry," he said this morning.

Crandall said he did not think the group’s campground recommendation led to its demise, adding that modernizing facilities remains "absolutely essential."

"We know that there are 2 million fewer overnight stays in Park Service campgrounds than 30 years ago, and we believe that campground stays are a very important way for the American people to connect with our national parks," he said.

In a letter to Bernhardt on Monday, Crandall and the panel’s chairman, Bill Yeargin, defended the committee’s work.

"In a very real way, we provided a missing voice in your department’s planning and deliberation, speaking on behalf of our customers who generate the approximately half billion recreation visits to Interior’s public lands and waters and the nearly $2 billion in fees and taxes that are administered by your department," they wrote.

Critics of the panel applauded the move.

Aaron Weiss, deputy director of the Center for Western Priorities, said the move to disband the committee was "a tacit recognition that industry-stacked advisory panels are a legal minefield."

"That said, the damage is already done, as we saw from Bernhardt’s controversial e-bike order, which was a request from bike manufacturers," Weiss said. "The industry got years of access to senior Interior officials, and now … Vela is notably leaving the rest of the panel’s recommendations on the table."

Zinke established the "Made in America" Outdoor Recreation Advisory Committee, saying that the Park Service needed more help from the private sector and that he didn’t want the agency "to be in the business of running campgrounds."

But the panel drew controversy from the beginning. Critics accused Zinke of stacking the committee with members who could benefit by any privatizing work done by the Park Service. When Zinke first announced the 15-member board, it included representatives from national park concessionaires such as Aramark Leisure and Delaware North, the National Park Hospitality Association, Choice Hotels International Inc., and the American Recreation Coalition, a group that wants more motorized access for boats and recreational vehicles.

One government watchdog group, the Democracy Forward Foundation, filed a lawsuit, saying Zinke had created a panel with obvious conflicts of interest and refused to say how members were chosen. The lawsuit also alleged that Zinke had been "a vocal proponent of privatizing large swaths of services provided to the public" by the Park Service.

Charisma Troiano, a spokesperson for Democracy Forward, said that federal courts have already delivered "significant blows to Trump’s Interior Department’s pattern of creating unlawful advisory committees" and that the administration "appears to have made the call to disband yet another industry-stacked committee."

"But disbandment won’t shield DOI from potential legal action should it move forward on any of the committee’s problematic recommendations, and we’ll remain vigilant," Troiano said.

The Park Service said it has 1,421 campgrounds, with 81 of them managed through concessions contracts.

The agency said it is already moving to modernize its campgrounds "in an appropriate manner," citing three of its sites as examples: Sleeping Bear Dunes National Lakeshore, which is renovating its showers; Chickasaw National Recreation Area, which will replace shower assemblies along with electrical and plumbing equipment at two campgrounds; and Mount Rainier National Park, which has replaced its wireless equipment.

Vela said the committee’s recommendations — part of a broader package contained in an Oct. 10 report — are under review by both the Park Service and the Interior Department.

"No action has been taken on the committee’s recommendations nor will any action be taken in the future unless and until the Department of the Interior and the National Park Service determine the recommendations will improve the visitor experience, protect national park resources, and are determined to be prudent investments," Vela said.

Weiss offered another suggestion, saying Bernhardt "should publicly dispose of the report."

"I’d recommend using a campfire at Yellowstone," he said.