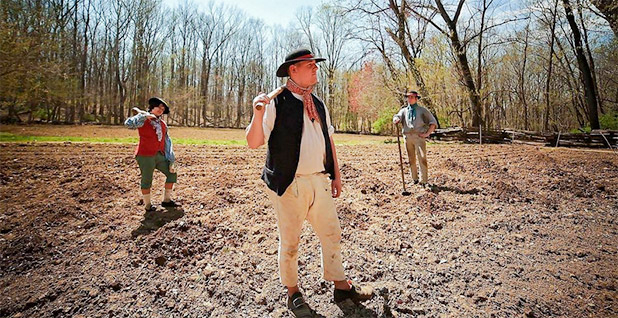 The National Park Service has long touted the Claude Moore Colonial Farm as a place where visitors could "step back in time" and see what life was like for a poor family in Northern Virginia in 1771, just before the Revolutionary War.

Yesterday, the agency said the park will close on Dec. 21.

The move follows a breakdown in contract talks between NPS and Friends of Claude Moore Colonial Farm, the nonprofit organization that has managed and operated the farm since 1981.

"We value the memories that people have made at the farm, and we will work with the community and the farm’s many dedicated volunteers to determine its future," said NPS spokeswoman Jenny Anzelmo-Sarles.

Friends of Claude Moore Colonial Farm said it would launch a public campaign to keep the park open.

"We intend to use every resource available — public and private, legislative and administrative — to keep the farm operating and open to the public," said Virginia Norton, president of the nonprofit.

Elliott Curzon, the organization’s director, said "it is not clear why the NPS would want to close an award-winning national park," but he noted that the 77-acre site in McLean has increased in value.

"We believe the NPS is under pressure from developers, including Fairfax County, to repurpose this land for development," Curzon said.

The Park Service said it has "absolutely zero interest or plans to pursue any kind of development on the property."

The nonprofit organization said it had been negotiating with the Park Service for six years to get another long-term agreement to run the park, which first opened in 1973.

But the group said NPS would only offer a new short-term agreement that it found to be "burdensome, oppressive and impossible under which to operate the farm."

The Park Service said its contract with the nonprofit originally expired in 2006 and was extended multiple times.

"Although we negotiated in good faith, in the end, the standard terms and legal requirements of a long-term agreement were not accepted by Friends of Claude Moore Colonial Farm," Anzelmo-Sarles said.

As part of its effort to keep the park open, a "Save the Farm" bill, H.R. 5201, has been introduced in the House by Republican Rep. Barbara Comstock of Virginia. It’s co-sponsored by Alaska Republican Rep. Don Young.

But officials with the nonprofit said they fear that even if the bill passes, it might not be enacted in time to prevent the farm from closing.

The group asked members of the public to make donations, to voice their support on social media and to contact the Park Service, the Interior Department and members of Congress.

A previous closure of the park, during a government shutdown in 2013, caused a stir on Capitol Hill and prompted a hearing by two House panels: the Natural Resources Committee and the Oversight and Government Reform Committee (E&E Daily, Oct. 17, 2013).

Republicans blamed the Obama administration for closing the park in an attempt to score political points, an accusation that NPS denied.

The farm is named after Claude Moore, a multimillionaire conservationist who worked as a Washington radiologist. He died in 1991 at the age of 98.