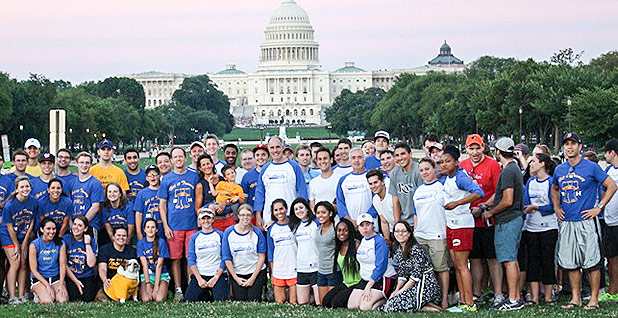 The National Park Service said today that it will suggest barring recreational use of the Washington Monument grounds. A softball team fielded by Sen. Bob Casey (D-Pa.) is shown here. Toomey/Facebook

The National Park Service today said it will propose permanently closing the Washington Monument grounds to recreational use.

The grounds had already been closed this year for a turf restoration project.

Under the new proposal, the grounds would remain closed even after the turf project is completed next year, said Mike Litterst, chief of communications for the National Mall and Memorial Parks.

Litterst said changes are being considered for 28 athletic fields on the National Mall and at Rock Creek Park.

Permitting would shift from the District of Columbia Department of Parks and Recreation to the National Park Service, he said.

In addition, Litterst said the cost of reservations would change from flat fees — in some cases as little as $7 per season — to an hourly rate system. It would cost $70 for two hours: $30 per hour plus a $10 administrative fee. That’s intended to provide revenue for upkeep and management of the fields, he said.

Full details will be posted when a public comment period opens on the proposal, likely next week, Litterst said.