NRG sees cash in its future as it moves from renewables 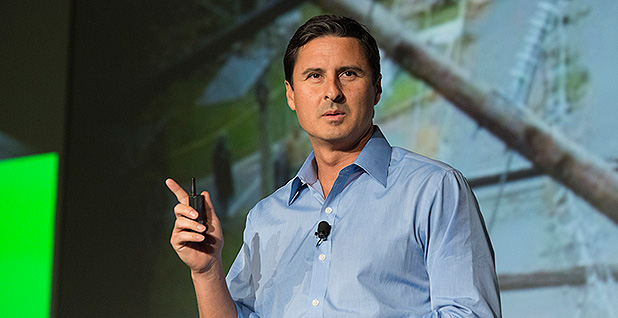 NRG Energy Inc., no stranger to dramatic overhauls, is embarking on a new plan to cut costs and boost cash while looking to narrow or even exit its well-known renewables business.

The transformation described yesterday by NRG envisions $2.5 billion to $4 billion from expected asset sales to help make it a simpler and stronger company.

But the plan also raises questions about NRG’s long-term strategy, even though shares surged 29 percent yesterday.

The company operates in the struggling U.S. merchant power sector, where the outlook for fossil fuels is clouded by low commodity prices and rising wind and solar capacity. Retail operations may need to retain a connection to green offerings, but it’s clear NRG is moving away from renewables even if it keeps some holdings in that realm.

"In many ways, I think it’ll be cutting off its nose to spite its face here because it just won’t have the same capabilities in what is a pretty complex emerging market," said Shayle Kann, head of GTM Research.

The green-tinted dialogue common under former CEO David Crane was missing yesterday during an NRG conference call. Mauricio Gutierrez, NRG’s current CEO, told analysts that the company has "the right plan" and "the right approach" for a changing industry, built around its combination of retail and generation.

"Following full execution of our plan," Gutierrez said, "NRG will have the leading integrated platform, low-cost structure and best-in-class balance sheet needed not only to sustain but thrive in today’s highly dynamic, competitive power sector."

The CEO couldn’t escape the renewable elephant in the room, though, especially after NRG noted the potential for $6.3 billion of excess cash to allocate through 2020.

"What is in the power industry that can give you a 10 to 15 percent return on invested capital … besides renewables?" asked Angie Storozynski, an analyst with Macquarie Capital (USA) Inc.

Gutierrez replied that there would be opportunities to deploy capital in both the generation and retail sectors. He said NRG would have "financial flexibility" when those situations arise. At one point during the call, he talked about interest in "mid-merit" generation investments that are different from baseload and peaking plants.

The push for NRG’s new plan stems from a business review outlined in February, when NRG announced that it had reached agreements with investors tied to Elliott Management Corp. and Bluescape Energy Partners LLC. Gutierrez noted that he had already had made efforts to streamline NRG and the company suggested more changes were possible.

As part of the deal, energy industry veteran C. John Wilder and Barry Smitherman, a former Texas energy regulator, were added to NRG’s board and included on a new Business Review Committee to look at possibilities.

End of ‘brown to green’

The review committee and NRG’s board decided to move ahead with the three-year plan detailed yesterday. It includes over $1 billion in recurring cost and margin improvement and about $13 billion of debt reduction. The company previously said its GenOn Energy unit, which filed for bankruptcy protection this year, is slated to emerge as a stand-alone company in the future.

NRG now may sell 6 gigawatts of conventional holdings, in addition to shedding GenOn’s roughly 15 GW. And it’s looking to unload 50 to 100 percent of its interest in NRG Yield Inc. and a renewables "platform."

Earlier this year, NRG put its net capacity at about 46 GW of generation with a reliance on fuels such as natural gas and coal. The company has interests in several thousand megawatts of wind and solar projects, including those tied to NRG Yield, which is known for its contracted assets. NRG has dual headquarters in New Jersey and Houston.

Lasan Johong, a senior research analyst with Auvila Research Consulting, said in a note yesterday that NRG’s "plan is not only viable, but also positions NRG to withstand the vagaries of commodity-price volatility."

In an interview, Johong said NRG may be able to sell certain renewable holdings at maximum value and buy other assets at a discount. He said being different from other players isn’t a bad idea.

"Following trends and following the party isn’t necessarily the best thing," he said.

Gutierrez said future capital allocation could include investing in "projects with proven technologies" and "quick paybacks." If there isn’t a "compelling investment opportunity," he said, "we will focus on returning capital to our shareholders." More strategic details are expected during an analyst day later this year or in 2018.

Crane, in an interview yesterday, called NRG’s new plan "fantastic," even though it "ends the shift from brown to green" at the company. Separating renewables could be a "lifeline" for people who work in green businesses at NRG, he said, suggesting they could see access to capital from elsewhere.

The former CEO said he thinks NRG will "get a good price for everything green" that it tries to sell. At the same time, he suggested, after seeing a call transcript, that Gutierrez "did a good job of trying to put sort of a brave face" on the future.

"I always tell people in the green community that I never went to the NRG board and said we should go from brown to green ’cause it’s the right thing to do, even though it is the right thing to do as a matter of morality," Crane said. "I always went and said this is the only high-growth area in our business, this is the only area where you can get double-digit returns."

NRG ousted Crane as CEO in late 2015 amid low power prices, poor stock performance and questions about investments such as solar. His tenure included investments in fossil fuel assets, and Crane has said he should have sold some assets after NRG’s marriage with GenOn.

Crane remains a major holder of NRG shares but suggested yesterday he likely won’t be a long-term shareholder if there are no green operations left at NRG.

NRG’s head of sustainability, Bruno Sarda, said via Twitter yesterday that NRG remains committed to a sustainability strategy including strong climate goals as the company executes its transformation.

Travis Miller, a strategist at Morningstar Inc., said NRG outlined "an aggressive plan" yesterday, though he doesn’t see a lot of additional shareholder value. He said potential cost-cutting may be beneficial.

"We think it’s more of a portfolio repositioning than a material uplift in value," Miller said, adding, "We think the market has significantly overreacted."

He did like the potential to size the wholesale generation portfolio in line with the retail operation. Still, he said renewable energy will continue to be a key source, meaning the retail business will need to provide "renewable energy services to customers who demand that type of energy."

Gutierrez has expressed support for renewables in the past, including last November, when he said they "provide not just an opportunity to execute on low-cost growth, but also a way to enhance our value proposition by contributing to our stable base of earnings and providing visibility into future cash flows." During his time as CEO, NRG has added a group of renewable assets previously tied to SunEdison Inc.

GTM Research’s Kann described NRG’s new plan as a mistake while acknowledging that activist investors are looking to generate cash.

"NRG is missing a big opportunity here because it was actually an early adopter among its peers of utility-scale renewables and [had] become a market leader there in what is certainly going to be the biggest area of growth for the independent power producer business over the next couple of decades," he said.

Kann said the idea that NRG could later get back in the market if the returns are right feels "like they are giving up on what was a good long-term strategy." NRG previously shifted its approach to home solar to cut costs.

Johong, of Auvila Research Consulting, said some of NRG’s outside investors might be interested in taking the company private if its shares aren’t trading for more than $40 within a couple of years. The stock closed regular trading at $21.09 yesterday.

One questioner on yesterday’s conference call asked whether it might make sense for NRG to go private at some point, noting an outlook that includes conventional generation, retail and increased cash.

Gutierrez said his focus was on the current plan, with speculation about a different type of ownership not "part of my priorities right now."