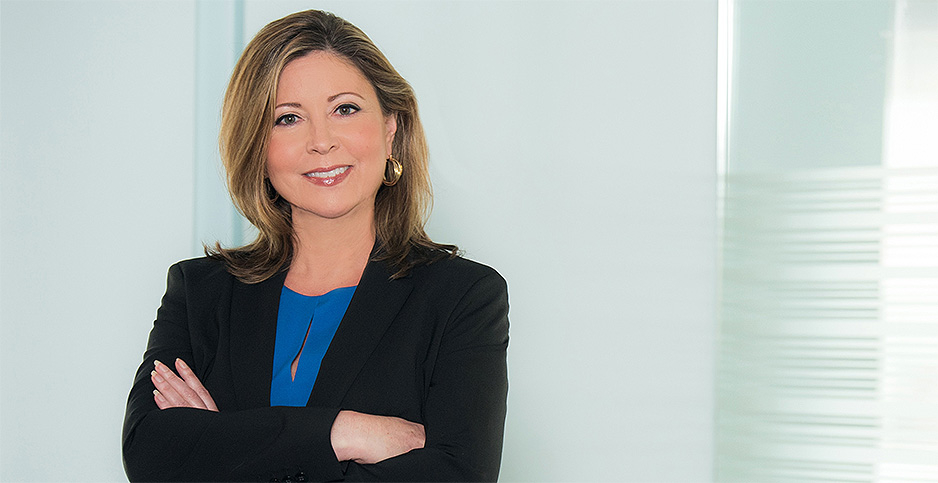 SAN ANTONIO — Maria Korsnick, CEO of the Nuclear Energy Institute, is on board with an all-of-the-above U.S. energy strategy as long as nuclear’s attributes are recognized — especially on climate.

Other sources of energy "could be carbon-free — they just have to figure it out," she told E&E News in a recent interview at a conference here. "It’s not like gas is bad. Gas just has to figure out how to be carbon-free. Same thing for coal."

Questions continue to swirl around existing and pending nuclear units in terms of costs, nuclear waste, plants’ full environmental footprints and the viability of nuclear in a changing electricity sector.

Korsnick, 55, weighed in on the outlook for her industry during a meeting of the National Association of Regulatory Utility Commissioners (NARUC) last week.

She served in the past as senior vice president of northeast operations for Exelon Corp. and was responsible for overseeing the operation of several nuclear power plants. She also was chief nuclear officer and acting CEO at Constellation Energy Nuclear Group. In 2017, she assumed the role of president and CEO at the Nuclear Energy Institute, which advocates for nuclear energy.

Korsnick sat down with E&E News on the sidelines of the NARUC conference to discuss "micro" reactors, carbon pricing, Energy Secretary Rick Perry and the future of nuclear:

What do you make of what’s going on in D.C., where impeachment is taking up a lot of air? How’s that affecting your business?

Actually, this administration has been very supportive in terms of acknowledging and appreciating the importance of nuclear. And so we look forward to continuing support.

I can tell you Secretary Perry as the head of the Department of Energy has been so very supportive of nuclear, not only in the United States, but [he] has traveled around to a variety of other countries engaging on nuclear as well. We couldn’t be happier with the support that he has provided, not only acknowledging the fleet of today but the innovation and the fleet of tomorrow.

The next five to seven years, I think, are going to be game-changing for nuclear. You’re going to see new technologies brought to the marketplace. You see that engagement and interest now on small modular reactors. But there are reactors smaller than small. We call ’em "micro." Department of Defense is interested in those.

Our national labs are the best, and that’s where a lot of the nuclear innovation in partnership with private companies is really happening.

Democrats talk about clean energy, but they don’t always embrace nuclear. How are you thinking about reaching out with them?

Their rhetoric is a little stronger on climate change than you hear sometimes on the Republican side. I think as you really get to the facts around climate change, and you really understand the solid workhorse of carbon-free energy that these nuclear plants are, if you get people into that detail, they support nuclear.

Environmentalists in the past, it was sort of easy to just say, "No nuclear." But now that they look at the data, they are coming around and saying, "OK, you know, nuclear needs to be part of the solution."

Do you think you’ll take a position on President Trump or a Republican versus Democrat next year? Do you all take a stance when it comes to 2020?

We take a stance on people that love nuclear power.

We need to have carbon recognized. One of the biggest attributes that nuclear brings to the marketplace is that carbon-free attribute. And for the high resilience and the high reliability that these units have, once they shut down, they’re shut down for good.

So a U.S. or at least marketwide carbon price?

Or recognition for carbon. I don’t want to tell ’em how they’re going to do it. Is it cap and trade? Is it doing this, is it doing that? I don’t know.

What do you want to see at the Federal Energy Regulatory Commission in terms of environmental effects?

The challenge is to encourage FERC that it is — or could be — their jurisdiction and for them to look at that and figure out how we could in fact take clean air and emission-free and carbon-free [attributes] … and build that into the market.

There’s ongoing tension between states, organized markets and the federal government. Do you have a preferred way of how that should shake out?

The fact is, they are weighing in; they are making some changes — New York, Illinois, Connecticut … just to name a few. New Jersey.

Defenders of competitive markets say you can’t mess up the market just to save one attribute. How would you respond to that?

You have to reform the market. It’s just not designed today to do what we’re asking it to do.

Even today, people say, "Well, you know, it’s a fair and open market." No, it’s not. The reality is we just need to step back. It’s going to be painful. But I think whatever it is that occurs, you also then need a bridging strategy.

What do you think about Plant Vogtle in Georgia, where new reactors are being constructed?

I’m very excited about Plant Vogtle. Obviously, I don’t want to speak on behalf of anybody from Southern Co.

When I chat with the folks that are there, they feel very solid on schedule, and you know there’s a variety of schedules. And they have some that are more aggressive, etc. But I think they feel very confident on the overall schedule. And it should be coming online at the end of 2021 for the first unit and then end of 2022 for the second unit (see related story).

How do you respond to the "Chernobyl" HBO miniseries tied to the 1986 nuclear accident in the former Soviet Union?

What we did for "Chernobyl" is we actually put together a viewers’ guide.

I used to be a licensed operator at a plant. If somebody would have come into the control room and demanded that we run a test that you don’t meet the initial conditions for, we don’t run the test. I mean, it’s just not the way that we operate here in the United States.

You feel like the public is broadly comfortable with the safety of nuclear in the U.S.?

I look at nuclear waste as future nuclear fuel. I don’t [really] look at it as just waste.

I always say, "Let’s make sure you put it someplace where you know how you can get it back," because my kids and their kids are going to want to retrieve this, because it’s future nuclear fuel.

What are your thoughts on potential interim storage sites and Yucca Mountain? How do you think about the next best step?

The fact is, we have nuclear fuel stored safely at all the different sites that have it now. But at the end of the day, as we start to decommission these sites, people are going to want to repurpose that land. And it’s hard to repurpose it when you have the spent fuel that’s there.

And so I think consolidated interim storage is a necessary step, simply because even if we started work on a long-term storage, it would take a long time.

Ultimately, we need a long-term repository. One day, maybe we’ll look like France and [how] they reprocess their fuel.

What is the message to the American people about the future of nuclear?

I’m proud of this fleet that we have today. The 96 [reactors] that we operate today produce as much as what would have needed 130 [reactors] … a generation ago. And what that really says is we’re operating these plants better, with higher capacity factors.

Then you have plants that are closing, [and] you’re like, "And, well, that doesn’t make any sense." It doesn’t. And that’s where the markets come in. The markets are not rationalizing some of this, and even at a time where we’re about to go for second license renewal, which means you can get an additional 20 years.

The fact that you have plants closing, even [with] the opportunity for that life extension, it just tells you that the markets are not appreciating the carbon-free, emission-free value that these plants are bringing.